How You Can Tell I Am Not from the South

I was born in Northern California and have lived here all my life.  I grew up in a city about an hour from San Francisco, moved 2 hours away to go to college, and now live halfway between those two.  I'm a Californian through and through.

I've been to the South a few times, mostly to go to Disney World, start a cruise, or do other touristy things.  None of those trips gave me much of a chance to experience what the South is really like, with one exception.  About 10 years ago, my friend Kathy and I spent a week in Northern Florida visiting our friend Colleen, who had recently moved there.  That trip was different, as I got a much more in-depth taste (literally!) of life in that part of the country.  We stayed at the very charming River Park Inn in Green Cove Springs.  There, I had grits for the first time in my life.  (Verdict: delicious!)

But there remain many Southern dishes that I have never tried.  In my 39 years of life, I have never had fried green tomatoes.  This year, our tomato plants are so heavy that they are bending and sprawling out of their raised bed and onto the lawn.  We're doing a decent job of keeping up with the ripe tomatoes, but there are some huge unripe ones that are really weighing down the plant.  I picked the largest and googled "fried green tomatoes." 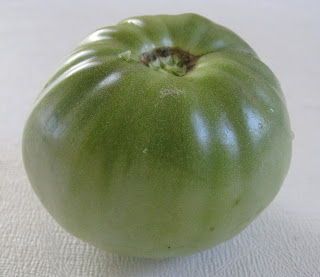 I found several recipes with the title of "Best Fried Green Tomatoes."  They had small variations, but generally involved a some combination of a milk/buttermilk/egg wash, followed by breading in cornmeal/bread crumbs.  I picked one that had good reviews and set forth.  Here are my slices, breaded and waiting to go: 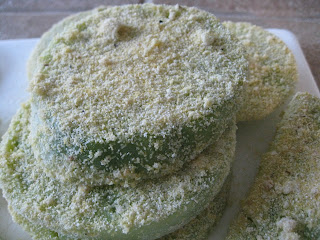 I heated up a tablespoon or two of oil, then added a few slices, taking care not to crowd them. 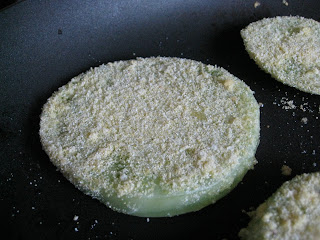 Then I reread the recipe.  Wait a minute- did that say to put a QUART of oil in the pan??  Silly Californian!  I'd automatically put a tablespoon in, like I do whenever I fry something.  I pulled out my tomatoes and heated way more oil.  Not nearly a quart, but at least the oil was visible in the pan. 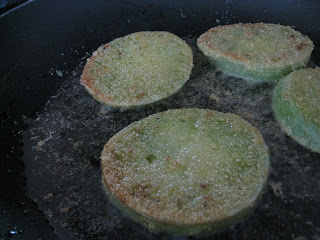 I cooked the tomatoes until the crust was golden brown, then put them on paper towels to drain.  I heated up some leftover spaghetti sauce and laid the fried green tomatoes on top.  I added a side dish of cucumber and tomato salad.  Dinner is served! 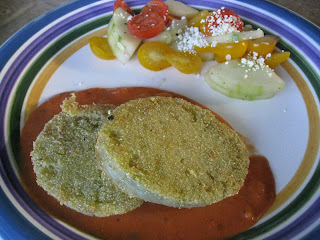 And then I suddenly wondered- are fried green tomatoes an entree?  I have no idea.  Should I have served something else?  Would they have been an entree if I'd used the entire quart of oil the recipe called for?

Help me, my Southern friends!  (Or my foodie friends from other places.)  Was my version so laughable that I haven't actually tasted fried green tomatoes the way they're supposed to be?  Do you like them?  Do you have a great recipe to share?
Email ThisBlogThis!Share to TwitterShare to FacebookShare to Pinterest
Labels: Recipes