Mindy Derosfir, at your service!

I spent the first 32 years of my life being Cindy Jones. Not surprisingly, my name didn't get misspelled or mispronounced very often. In fact, I can only remember two times EVER that someone got my name wrong.

When I was about 13, our family went to Mexico. "HOE-ness family?" the man called to the waiting crowd. Nobody answered. "HOE-ness family?" he asked increasingly loudly. I can't remember which of us finally realized he was calling for the Jones family. It is the one and only time I've ever heard Jones mispronounced. I've never seen it misspelled.

When I was 18, I became a California 4-H Diamond Star. (Scroll down to 1990-1991 to see a picture of my team.) I traveled all around the state giving speeches. Usually I wrote my own, but occasionally I received a pre-written speech. One arrived with an introduction that read, "My name is Cindy Smith." I thought this was hilarious and practiced it that way. My mom warned me not to... and I should have listened. I told an assembled crowd of about 1000 people, "My name is Cmindy Sith." And a nickname was born that lasts to this day.

When I married Steve and became Cindy deRosier, I knew that my new last name would cause some problems. Pretty much nobody pronounces it correctly on the first try. Some of my longtime friends don't know how to say it. (It is French for "of the rose" and is pronounced de-ROSE-e-a.  Think Cartier, Garnier, or dossier.) That was quite a shock for someone who grew up as a Jones.

And as difficult as deRosier is to say, it is even harder to spell. It starts with a lowercase letter and has a capital letter in it with no space in between, which freaks people out. We are frequently alphabetized after the Z's, as if lowercase d is somehow not a D at all.

For the last 7 years, I've been collecting address labels and other things with ridiculous spellings of my name. I keep them in a file labeled, "deRosier is not THAT hard." I have enough that I could do a whole book. Instead, I chose the 'best' and made this layout. 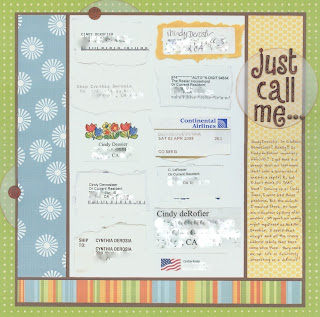 I encourage all of you to collect misspellings of your name and make your own layout! It was so much fun... and quite hilarious to see all the weird versions of my name in one place.
Email ThisBlogThis!Share to TwitterShare to FacebookShare to Pinterest
Labels: Layouts