I've always wanted to try glassblowing.  In fact, it was the very first thing I put on my list of 40 Things.  I did some research and found classes not too far away, but the price was prohibitive.  Further research led me to an affordable alternative- glass flamework.

I didn't really have any concept of what I'd be doing or making when I showed up for the class.  We were each given a key, a toolkit, a vial of blue goo, six steel rods, and black and ivory glass rods.  We were to pick four additional glass rods (two translucent and two opaque) from a large display of colors. I chose opaque orange and yellow, translucent blue and green. 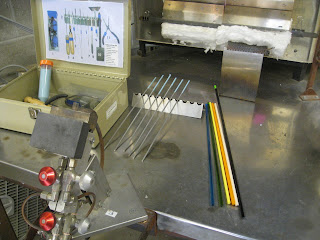 The first step was to dip each of the steel mandrels into the blue goo, which I learned was bead release. 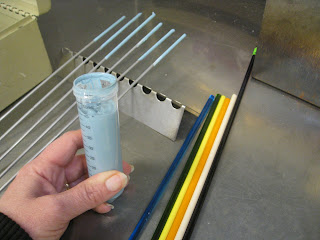 After a safety orientation, our instructor Adi Braeman demonstrated the steps to make a basic round bead.  As with most things, it looked much easier than it actually was!  After we each made one round bead, we moved on to other techniques, like pulling a stringer, decorating with dots, and shaping the beads.  Here I am, working on my 3rd bead. 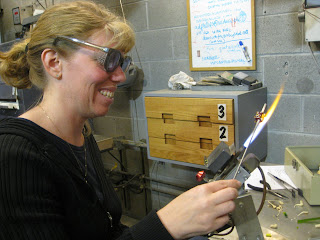 This bead was made from ivory, orange and green glass.  Part of the challenge of beadmaking is that the colors at 1600° F do not necessarily look the same as they will at room temperature. 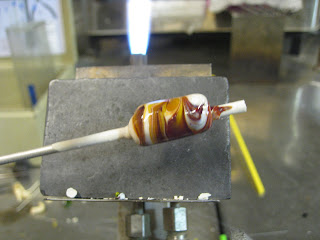 During the 3.5 hour class, we each made 6 beads.  Somehow, it had not occurred to me that molten glass would not cool enough to take home that evening.  Instead, we had to put each of our (literally) red-hot beads into a kiln set at 961° F.  The computer would gradually bring the kiln down to room temperature overnight, and we could pick up our beads the following day.  It was very frustrating to leave at the end of the class without knowing what my beads looked like. 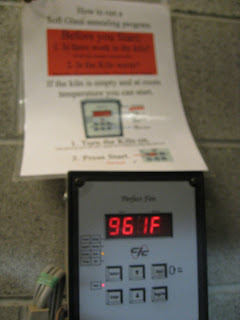 When I picked them up the next day, I was so excited to finally see them.  Definitely beginner's work, but super cool nonetheless. 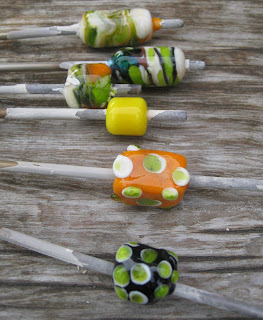 I think this one turned out the best.  It has a good shape and decent dots.  It came off the mandrel easily.  (Four of the six didn't come off until Steve muscled them off with pliers.  One cracked in the process.) 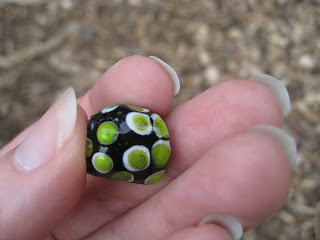 This is my second favorite.  It's the red-hot one in the picture above.  I love the colors, but it's not quite even and I slopped quite a bit of extra glass on the right-hand side of the mandrel.  I'm going to try filing that off. 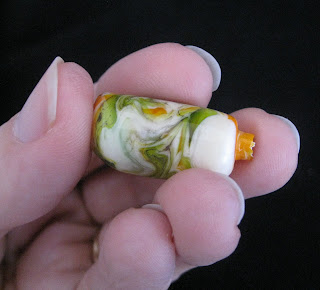 This is my third favorite.  It didn't turn out anything like I expected.  I thought I was adding just a touch of opaque ivory and translucent green on top of the translucent turquoise, but obviously I was wrong.  The colors were all really similar when it was red-hot. 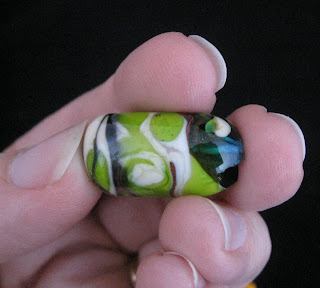 This class was incredibly fun... everything I'd hoped it would be and more.  This is exactly what I was hoping when I started 40 Things.  Goal #21 accomplished!
Email ThisBlogThis!Share to TwitterShare to FacebookShare to Pinterest
Labels: 40 Things