During my 11 years as a 5th grade teacher, one of my favorite topics to teach was the Solar System.  As a culmination to our unit, my students would take the information they learned, simplify it to a 1st grade level, write a non-fiction children's book, then read it to a group of 1st grade students.  It was an awesome project, one that my students really enjoyed.  I'm kicking myself now that I never took photos or made photocopies of any of my students' books.  I really wish I could show you how cool they were.

The hardest part of teaching about the Solar System is helping students get a sense of the size of the planets and the distances between them.  There is simply no good way to help them understand just how big and just how far away the planets are.  It is impossible to draw an accurate picture of the Solar System on a piece of paper or a chalkboard, and equally impossible to set up a realistic scale model in the classroom or on the playground.  Even as an adult, it is very difficult to understand the size of the Solar System.  For that reason, I've always wanted to do a Planet Walk.

A Planet Walk is an accurate scale model of the Solar System.  You start at the sun, which is represented with a large circle, and walk a few dozen yards to a teensy tiny dot representing Mercury.  A few yards further, you reach Venus, then Earth, then Mars.  As you pass the Asteroid Belt, the distances between the planets grows significantly.  The whole thing covers miles.

There is a Planet Walk at Sugarloaf Ridge State Park, approximately an hour from our house.  (If I'd known there was a Planet Walk so close to home back when I was teaching, I totally would have taken my students there.)  When Steve asked what I wanted to do for Mother's Day, I told him I wanted to do the Planet Walk. 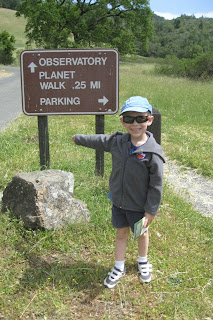 We invited Steve's parents to come with us and set a time to meet.  Unfortunately, I've been suffering with terrible allergies, a hideous cold, and what I'm now pretty sure is a sinus infection.  I felt absolutely horrible on Saturday night- I could barely breathe, couldn't swallow, couldn't sleep without gagging.  By Sunday morning, I didn't know if I could do a hike.  But Steve's parents were already on the road... and besides, I really, really, REALLY wanted to go.  I took as much medication as I safely could and we headed on our way.

When we arrived, I was feeling pretty good.  I could breathe (which is fairly important for hiking) and was really excited to finally be doing a Planet Walk.  Trevor raced over to the first sign and read it flawlessly.  The yellow circle on the sign shows the size of the sun on the scale model. 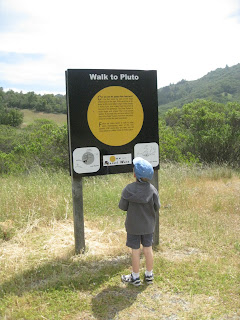 Every step represents about a million miles!  We set off on our hike.  Mercury, Venus and Earth were very close (only several dozen steps from each other) and all easily visible from the sun.  Trevor raced ahead to each one to read the sign out loud.  We had to go a couple hundred yards to reach Mars.  See that tiny yellow dot near the center of the photo?  That's the same sign as in the previous picture.  Mars was the size of a sesame seed. 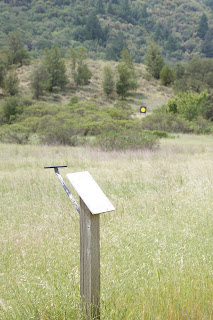 It took much longer to get to Jupiter, and even farther to get to Saturn.  But the terrain was flat, the path wide and well-maintained, and the scenery absolutely gorgeous. 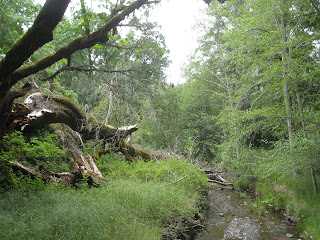 We finally reached Uranus.  It was mind-boggling how far apart the outer planets are.  At this point, the path changed significantly.  The wide and flat path we'd been on from the sun to Uranus became a steep, narrow trail.  We plodded along from Uranus to Neptune (about 1.3 miles and almost entirely uphill). 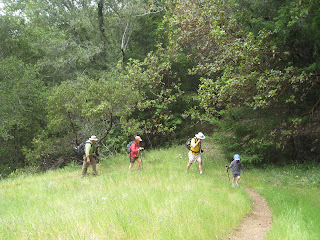 Finally, at long last, we reached Neptune!  Goal #23 on my 40 Things list accomplished! 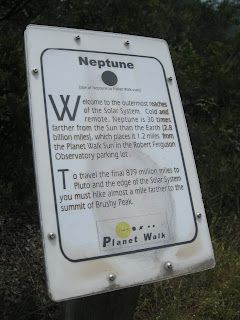 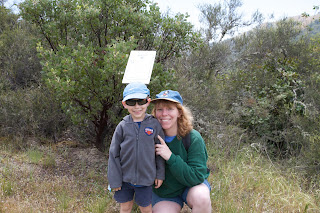 Check out the view from Neptune.  I marked the location of our car (right next to the Sun) on the photo.  I told you the hike went uphill! 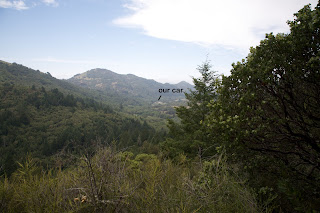 To reach Pluto, the path goes another mile uphill to the summit.  By this point, I was not feeling good at all.  My nose was both stuffed and running, and I was blowing it every minute or so.  The lack of sleep and weeks of illness had definitely caught up to me.  Thank goodness that Pluto was demoted from planet status, because that gave me a convenient excuse to turn back at Neptune and still feel like I'd done a Planet Walk.

We had a picnic lunch just beyond Neptune and enjoyed the stunning views.  Then we headed back down, visiting each of the planets in reverse order.  While the trail does loop, we chose to backtrack instead.  That gave me the chance to quiz Trevor about which planet would be next and to review the fun facts he'd learned along the hike. 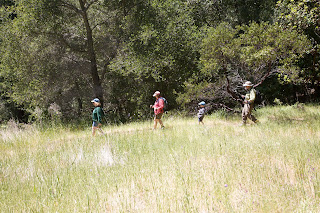 All in all, we hiked about 5 miles.  Other than the Uranus-to-Neptune portion, it was a very easy hike that would be suitable for people of all ages and fitness levels.  Even that portion wasn't too bad.  While I struggled a bit because I was sick, 5-year old Trevor didn't have any trouble. 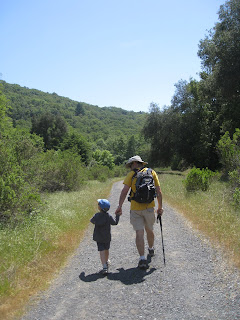 I highly recommend the Planet Walk at Sugarloaf Ridge State Park to everyone.  Unfortunately, your time to enjoy it may be limited.  I was absolutely devastated to see that Sugarloaf Ridge is on the State Park closure list.  This place is a treasure.  I hope and pray that it will be spared and that we will be able to enjoy it for years to come.
Email ThisBlogThis!Share to TwitterShare to FacebookShare to Pinterest
Labels: 40 Things