Did you know that Cub Scouting turned 83 last month? Across the country, Packs celebrated the birthday of Cub Scouts with a special event called the Blue & Gold. 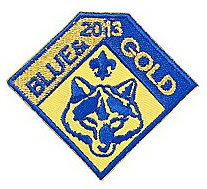 Trevor has been a Cub Scout for about 7 months now, so this was our first Blue & Gold. Having never attended one and with only the vaguest idea of what one was, I volunteered to plan the Blue & Gold for our Pack. I did a bunch of research and learned that there are as many different versions of the Blue & Gold as there are Packs. Some do catered banquets and hire professional entertainers. Some do potlucks and perform skits. Some simply bring a cake to an ordinary Pack Meeting. I decided to model ours after an old-fashioned kid's birthday party.

When the boys arrived, they immediately went to a craft table to make a Pack Pride Pin craft. I'll share pictures and a tutorial in a future post.

Once everyone arrived, we did our opening ceremony. Here are some of the boys up on stage. That's Trevor in orange. Each boy recited a line:


We'd like to welcome young and old,
To our party, the Blue and Gold.
We're having a party to celebrate
Cub Scout's 83 years - that's great!
And we give thanks to all those who
Have helped promote the gold and blue.
So now we'll say it loud and bold
Welcome to our Blue and Gold!

Even though they'd memorized their lines and knew them cold during rehearsal, I surprised them with a Cub Scout frisbee with the line printed on the back so that they could peek at it if they got nervous up on stage. Most of them peeked. 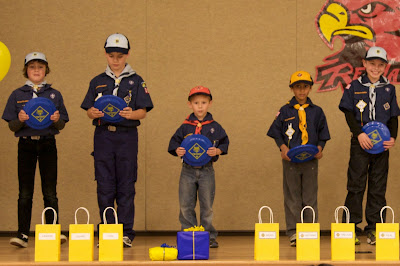 After the welcome ceremony, we played Cub Scout 4 Corners. It was just like the Lego 4 Corners game that I made for Trevor's last birthday but the questions were all about Cub Scouts. Here's a sample question:

Everyone who was standing in the correct corner earned a blue token. There was a present for the person with the most tokens at the end of the game. 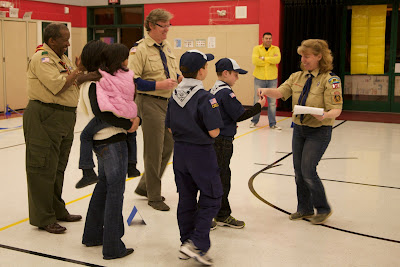 By the way, the answer to that question was B. That was one of the easier questions.

After that game, we divided into four groups and played Cub Scout Mad Libs. Each group presented their completed Mad Lib. We learned all sorts of fun "facts" - according to one group, our Pack was established a million years ago by Taylor Swift in Disneyland. It was hilarious.

Next was our pinata.  Trevor and I made it. I'll share the pinata from start to finish tomorrow.

After the pinata, we played a fun present game. It's an old classic, played somewhat like Hot Potato. Ahead of time, you wrap a present in many layers. Sit the kids in a circle and start the music. When the music stops, the person holding the present begins to unwrap as quickly as they can. When the music starts again, the present continues around the circle. I did one round for all the children (Scouts and their siblings). Everyone got a sparkly blue pencil and a gold bouncy ball. The second round was only for the Scouts. They got the patch at the top of this post. 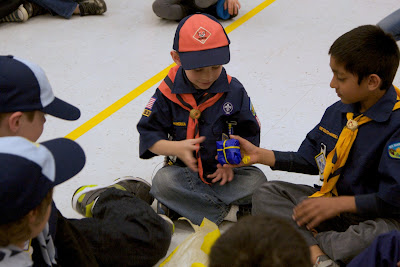 Finally, it was time to sing Happy Birthday to Cub Scouts and enjoy our cake. We concluded with announcements and the presentation of awards. A highlight for me was seeing Trevor earn his Tiger Rank. 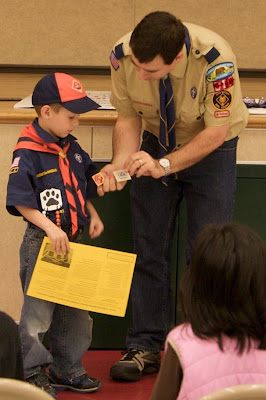