Even though this is Trevor's first year in Cub Scouts, we've been making Pinewood Derby cars for the past two years to exhibit and race at the fair.  We have great fun planning, building and racing our cars.

The first time I made a car was 2011.  My dad has an amazing workshop (more on that later), but we didn't have time to visit before the entry due date, so I was stuck using the tools we have here.  I made one simple cut (by hand) then relied on my painting skills to make a fabulous (if I do say so myself) Watermelon Car.

Last year, we made plans to head to my parents' house to make our cars.  I used a table saw to cut a gentle wedge, then used the drill press to create a bunch of holes on one end.  After chiseling, sanding, painting, decoupaging and gluing, I had an awesome Popcorn Box Car.

Last weekend, we went to my parents' house to use my dad's tools to make this year's cars. As I mentioned, my dad has an incredibly impressive workshop.  He is one of those people who can build or fix anything.  From the time I was born (in 1972) to the time my parents sold our house (1984), my dad more than doubled the square footage of the house (by adding on a playroom and a second story) and made most of the furniture in the house.  He also built a 2-story cabin in the mountains.  And dozens of other things.  All this was in his spare time and without any formal training.

As the oldest child, I grew up "helping" Dad with all his projects.  I was the only 5 year old on the block who knew how to mix mortar and lay bricks.  I could hang drywall and I knew why it was important to countersink a screw.  There are pictures of me around age 7 on the 2-story roof installing shingles.  One of these days, I'll share some pictures of the beautiful woodworking my dad does.
For now, here are some pictures of us starting our Pinewood cars.  That's my dad helping Trevor use the band saw to rough out the shape of his car. 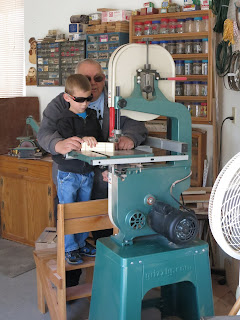 Next, Grandpa helped Trevor use the belt sander. 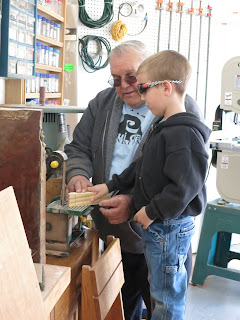 Then they moved to the drill press, where Trevor drilled a hole where a tail will go. 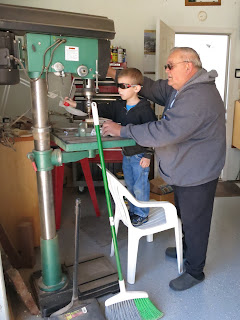 Safety first!  Dad hadn't yet replaced shop glasses that had broken, so we all wore sunglasses as eye protection.  Here I am, using the belt sander. 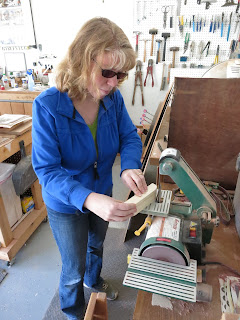 And here's Steve on the band saw. 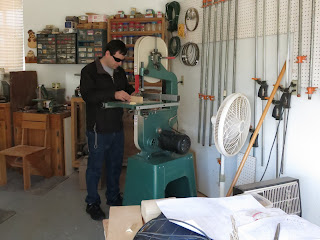 Now that we've done all the design work, cutting and sanding, our next step is painting and accessorizing, which we'll work on next week.  I promise to show pictures when they're done! In the meantime, do you have any guesses what our cars will look like?  :)
Email ThisBlogThis!Share to TwitterShare to FacebookShare to Pinterest
Labels: Cub Scouts, Pinewood Derby