The Making of the Blue & Gold Pinata

As promised, today I'm sharing the piñata Trevor and I made for the Cub Scout Blue & Gold. I'm no stranger to making piñatas, having successfully made around 50 in my lifetime. I've blogged about some of them, including a Lego piñata, a strawberry piñata,  a zebra piñata, and a taco piñata. Despite tons of piñata experience, this one turned out to be one of the most challenging.

I started by putting 4 layers of paper mache on a large, round balloon. (Trevor hates the feeling of paper mache, so he tore all my paper strips and acted as photographer.) Here I am working on the first layer, with no idea what would be happening within the next few hours... 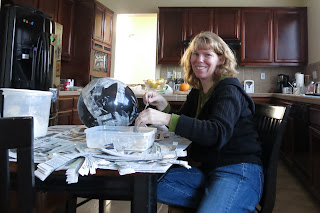 I finished all the layers, then and set the wet piñata aside and made dinner. By the time we finished eating, the balloon was bulging out the opening at the top of the paper mache in a decidedly concerning way. I've never seen that happen before. I gently touched it; it was extremely taut and looked like it would burst any second. I still can't figure out why. Sure enough, it ended up bursting before the paper mache was fully set. There's the balloon shard at the bottom of the piñata. 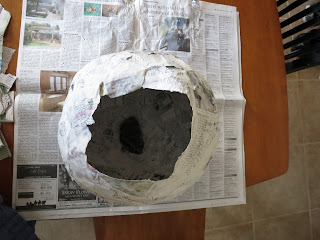 Fortunately, it had dried enough that the piñata didn't collapse. At least, most of it didn't. One side sagged in quite noticeably. Sigh.

I let the piñata dry completely, then did what I could to repair the damage. It helped, but it wasn't perfect. The top was the worst, as the neat round hole I'd left was now a raggedy, weak opening. Still, I pressed on. Trevor helped me fabricate a hanger, we poured in candy, and then we taped over the opening.

Trevor gave the piñata a coat of blue paint. 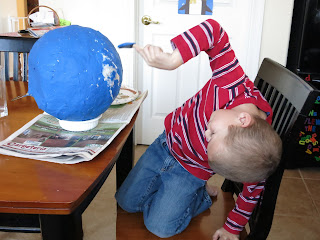 The paint helped a bit, but there were still some very obvious (and ugly) indentations. Check out the top of the piñata (which is actually in the lower left of the picture). It looked like someone kicked it. 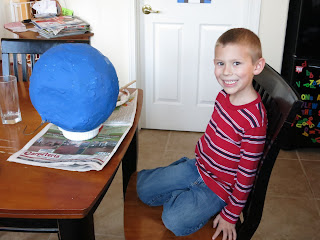 The next step was adding crepe paper to the piñata. Ordinarily, I would have cut strips of crepe paper fringe and just wrapped it around, but we needed a technique to disguise our not-round piñata. So the three of us hand-applied thousands of crepe paper squares, one at a time, to the piñata. It was tedious, to say the least. But it looked fabulous. 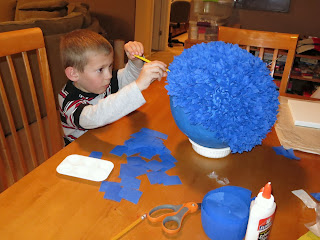 Once we covered the entire top, we moved the piñata from the table to the exercise bike. We attached gold crepe paper banners to the bottom, then covered the rest of the piñata with blue. 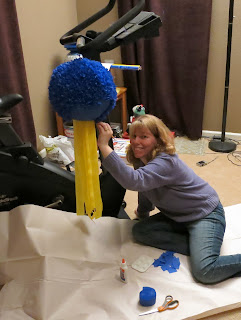 The final step was attaching our Pack number to the piñata. 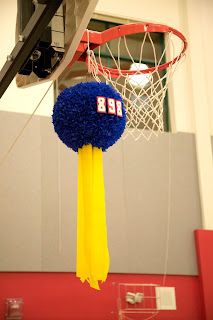 On the night of the Blue & Gold, Steve rigged the piñata on a basketball hoop. We didn't use blindfolds; instead, we had a parent raise and lower the piñata wildly to make it challenging to hit. Here's Trevor, taking his turn. 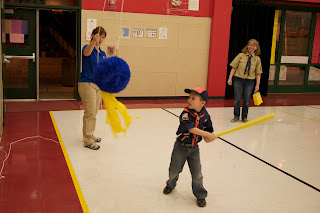 I'm always nervous how my homemade piñatas will hold up. You want them to be strong enough so that all the kids get a turn hitting them before they break, but not so strong that it takes an adult with a sledgehammer to get them open. This one turned out to be perfect. Out of all the Scouts and their siblings, all but two hit before the piñata burst open.