I have a lot of fun designing Trevor's birthday cake each year.  I've made a Very Hungry Caterpillar cake, a Cookie Monster cake, a Monsters Inc. cake, a maze cake, a giraffe cake (my most popular post until yesterday when The World's Greatest Classroom Birthday Treat overtook it), and a Lego cake.  I've been thinking about my plans for the Angry Bird cake for awhile.

Except Trevor suddenly decided he doesn't want an Angry Birds cake.  He wants cupcakes so that each child can decorate their own.  I don't think I've mentioned on the blog that Trevor has been taking a cake decorating class.  (We LOVE it.)  This class has taught him, among other things, that cake decorating is not something to be delegated to Mommy, but instead something that kids can do themselves.  He insists that it will be much more fun for his friends to decorate their own cupcakes than just eating a cake I made would be.  He's right, of course, but it does make me a little sad that I won't be making his cake.  On the other hand, not having to decorate a fancy, beyond-my-skill level cake is a bit of a relief too.

Yesterday we took a trip to the candy aisle together to see if we could find candies that would make a cute Angry Bird cupcake.  We settled on Candy Eyeballs, black licorice, and a package of Mike and Ike. 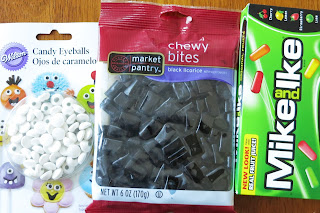 We baked up some chocolate cupcakes and frosted them with red frosting (made by mixing cherry Kool-Aid with vanilla frosting).  We added eyeballs, then used kitchen shears to cut the licorice into thin strips to make eyebrows.  We put a Mike and Ike down for the top part of the beak, then cut a second one to form the bottom part of the beak.

Here's our first draft.  It's definitely not quite right. 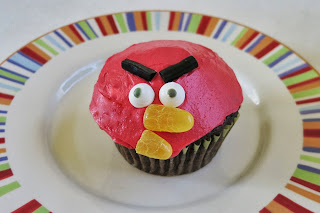 Would an orange beak be better?  No.  Worse. 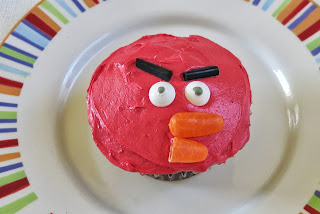 What about just a single beak?  No. 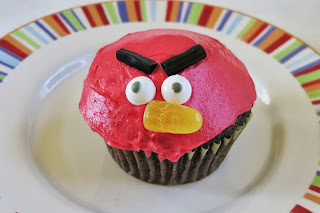 Trevor and I were contemplating taking a trip to the specialty candy store to find better beak options.  Steve came home as we were mulling it over and suggested slitting a Mike and Ike vertically to make a beak.  Brilliant!  We used the kitchen sheers to do a quick snip 3/4 of the way through a yellow candy.  Cute!  We snipped a red candy into thirds and added the red bird's signature feathers.  So much better! 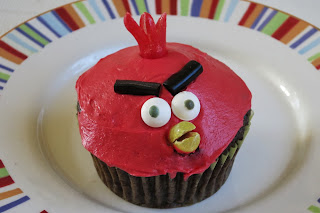