Here's the May sketch from The Scrapping Stamper: 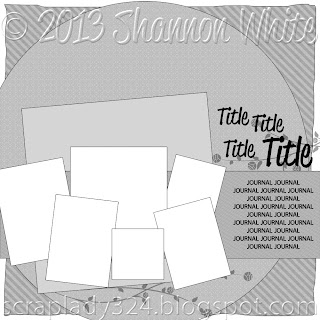 And here's my interpretation: 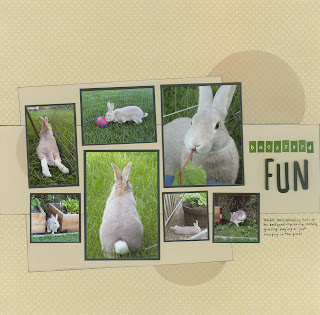 Here's what I did to make the sketch work for me:


I love that my layout is all about the pictures.  My eye goes first to Trouble munching on swiss chard, then to his awesome tail, then to his giant back feet stretched out behind him. Adorable.

This layout provides a good opportunity for me to talk about a facet of owning a house rabbit that I didn't discuss during Bunny Week, which is outdoor play time.  All rabbits need plenty of daily play time where they can run at top speed, investigate objects, and interact with toys. Trouble has free run of our downstairs from 5:00 am to 8:00 pm, so he easily meets his exercise needs indoors.  When the weather is nice, we'll take him into the backyard with us to provide a different environment for him.  When he is running loose outdoors, we do not take our eyes off of him and are always just a few steps away.  A rabbit can easily dig under a fence and escape or become victim to a hawk or other raptor, which are numerous where we live.  When we're doing yardwork or picnicking or crafting or doing anything where we cannot watch him every second, we put him in a large x-pen under our shade structure (to block raptors from seeing him).  We still watch him, of course.  We do not leave him unattended outdoors, even for a second. Trouble loves outdoor time - running at top speed without his paws slipping on hardwood floors like they do indoors, grazing in the garden, and lounging in the cool grass.
Email ThisBlogThis!Share to TwitterShare to FacebookShare to Pinterest
Labels: Layouts, Rabbits, Sketches