Back in Party Planning Mode

Trevor's birthday is in a little over a month. Being the advanced planners that we are, we've been brainstorming this party since approximately five minutes after last year's Lego Party ended. Trevor decided immediately that he wanted an Angry Birds theme, and he wanted his invitations to use the Angry Birds Shaped Cards he made.

I photographed his Red Bird on a piece of blue cardstock, leaving plenty of space for text. I cropped to 4x6, then added the text using Picasa. Then all we had to do was order prints.

Here's how the invitation turned out. I love that it incorporates Trevor's artwork. 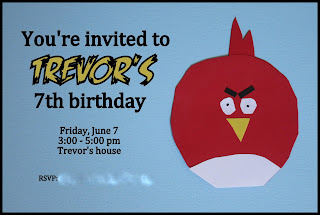 So what else is in the works for the Angry Birds party? We're creating several themed games, goodie bags, decorations, a Red Bird pinata, of course, an Angry Birds cake. Stay tuned!
Email ThisBlogThis!Share to TwitterShare to FacebookShare to Pinterest
Labels: Parties