Recently, a friend referred to me as adventurous.  I had to laugh - I'm as risk-averse as a person could be.  I have no interest in sky diving, mountain climbing, or any of the activities normally considered adventurous.  I lack the thrill-seeker gene and get no adrenaline rush from things that excite others.  I am an extreme advanced planner and hate spontaneity.  "I'm a lot of things," I told her, "but adventurous is not one of them."

"No," she insisted, "you are a very adventurous person.  Small adventures are still adventures."  I realized she was right.  I'm a risk-averse, non-thrill-seeking, advanced-planner who actively seeks and creates small adventures all the time.

Case in point: there's a new-ish gourmet donut shop in town, so in April I suggested that for our May MOMS Club brunch, we order a bunch of different donuts and do a formal taste-test with scorecards and crown a winner.  Everyone liked the idea, so that's exactly what we did.  I made up a scorecard.  Each donut could earn up to 3 smily faces for appearance, 5 for flavor, and 2 for originality.  I printed enough scorecards for everyone, then headed over to Red Devil Donuts to select some of their most interesting and appealing donuts for our taste-test. 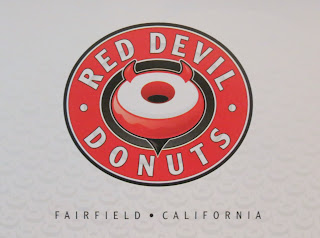 We started with The Ozzy, described as a red velvet donut with blackberry glaze and chocolate drizzle. It was very pretty and smelled great.  We awarded appearance and originality points, then moved on to tasting.  While it was yummy and fresh, there was no discernible blackberry taste.  The chocolate taste was very mild. 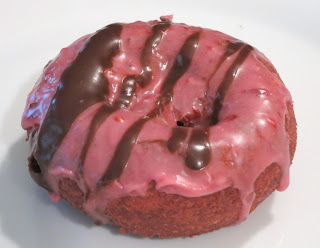 We moved on to The CHP, a cake donut topped with maple glaze and Applewood bacon.  We had quite a bit of discussion about this one.  We loved the fresh, soft, and sweet cake donut, the flavorful maple glaze, and the perfect balance of salty/sweet that the bacon provided.  We all agreed - this was a really good donut. 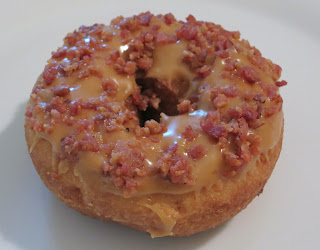 Our third donut was The Curse, described as a raised donut with peanut butter icing and chocolate covered pretzels.  We spent some time debating whether these are 'chocolate covered pretzels' or not (barely).  We liked the donut, but there was a bit too much of the very-sweet frosting and the chocolate/peanut balance wasn't quite right.  We felt the whole pretzels made it a bit difficult to eat and would have preferred them broken into pieces (and actually covered in chocolate). 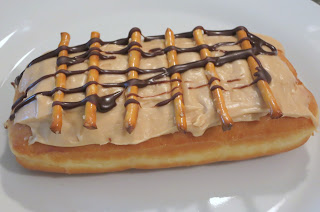 Next up was The 50/50 Bar.  According to the menu, it is a vanilla creme filled long john dipped in orange glaze.  Um... no.  It was not filled; the creme was globbed on top.  It was not dipped; the glaze was clearly drizzled.  This could have been a beautiful donut.  I gave it one happy face out of three for appearance and that was very generous.  Now that I'm looking at the photos, I'm wondering what I was thinking awarding it even one.

I'm not sure why, but I hate pastry creme, so the big globs of it on the donut were extremely unappealing to me.  I loved the orange glaze though.  The others liked this donut more than I did, as everyone else thought the creme was tasty (though all wondered why it was on top instead of inside as advertised). 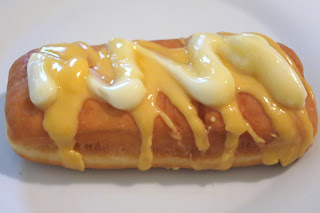 Our fifth donut was The Cricket, a chocolate cake donut with mint green icing and mini chocolate chips.  I had the highest hopes for this one.  I love mint and I love chocolate and I especially love them together.  The green was so pretty, but where are the mini chocolate chips? I count exactly three standard-size chocolate chips.  We each took a bite.  What the heck?!  It's not peppermint, it's spearmint.  It was so weird (and not in a good way).  What a disappointment when I'd been expecting this to be my favorite. 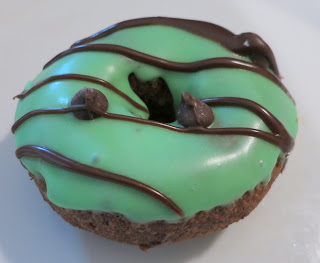 The final donut was The Ultimate Sin, described as a chocolate cake donut with chocolate icing, chocolate creme, and one truffle topped with a shake of cocoa powder.  Our first observation - this is a really ugly donut... and it's missing the cocoa powder.  It was very difficult to cut into small pieces because of the very dense truffle hidden in the center.  When we tasted it, we were disappointed once more.  I hated the creme (everyone else said it was fine), but the donut itself did not have a deep or rich chocolate flavor like we'd expected. 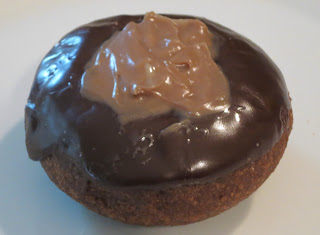 We totaled up all the points.  Here's my scorecard. 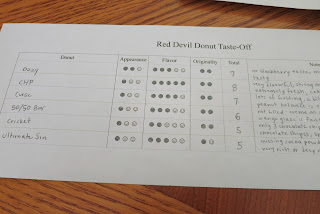 Time to declare the overall winner!  Starting from the bottom, the loser was The Cricket with an average of 4.5 points out of 10.  In 5th place was The Ultimate Sin, with an average of 5.0 points.  Fourth place went to The Curse, with 6.0 points.  In 3rd place was The 50/50 Bar with 6.5 points.  There was a tie for 1st place between the Ozzy and the CHP, both of which averaged 7.5 points.

We had a blast with this!  It's always going to be fun to get together with friends and eat donuts, but turning it into a taste-test added so much to the experience.  We'll definitely be doing something like this again.

Small adventures are still adventures.
Email ThisBlogThis!Share to TwitterShare to FacebookShare to Pinterest