When Trevor was 20 months old, we went on a cruise to Mexico.  Trevor LOVED it.  He especially loved the sports deck and would spend hours playing ping pong, tennis, miniature golf, and chess with the pieces that were almost as big as him.  But his favorite was shuffleboard.  Every morning when he woke up, the first thing he wanted to do was play shuffleboard. When we got back from our cruise, I went through my pictures and fell in love with this one. 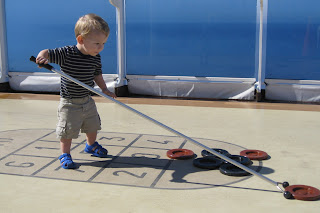 On a whim, I entered it in Princess Cruises' quarterly photo contest. Imagine my surprise when I opened their newsletter months later and saw my picture. I wasn't the winner (that person got a free cruise), but I was the runner-up. I got $25. Quite a disparity between first place and second place, but I was happy with my $25 and the knowledge that I had actually placed in a photo contest.

I scrapped the cruise shortly after returning home, before I'd learned that my photo had placed in the contest.  (This is the ONLY layout I made about that cruise due to my unusual quirk.)

Fast forward almost 5 years.  I've always thought that I should go back and record the story of the winning photo.  I told myself that telling the story of entering a photo contest is not the same as making a second layout about a trip, so I printed an extra copy of the picture and waited for inspiration to strike.

Inspiration took the form of a Fiskateer challenge on National Scrapbook Day.  We were challenged to include an anchor on our page.  I immediately knew what I wanted to do. 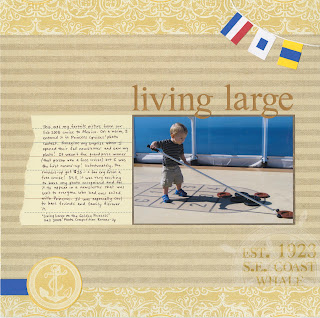 I love everything about this layout, especially the flags.  Any idea why I chose the three that I did?  They're the International Maritime Signal Flags for T, S and D... Trevor's initials!  I was really pleased with myself for thinking of that.  For the record, that series of flags can spell TSD (Tango Sierra Delta) but they can also signify "Keep clear of me; I am engaged in pair trawling" (T); "I am operating astern propulsion" (S); and "Keep clear of me; I am maneuvering with difficulty" (D).  That amuses me, as I don't imagine a lot of cruise ships engage in pair trawling.

Tomorrow I'm sharing a kid's craft, then I'll return to NSD projects on Wednesday.
Posted by Cindy deRosier at 5:00 AM