For the Love of Stuffed Animals...

Trevor LOVES stuffed animals and always has.  He's almost 7 and I keep wondering if he'll outgrow them any time soon.  He still asks for a new stuffed animal for every gift occasion and always chooses a stuffed animal as his souvenir from a trip.  They're a big part of his life.

I've scrapped about Trevor's stuffed animals exactly once before, in a layout about his daily routine of feeding breakfast to the animals before eating his own breakfast (you can see the layout here).  Yet I had dozens of unscrapped pictures of the animals and more stories to tell.

One of the stories I wanted to tell was about Trevor packing stuffed animals any time we go on vacation.  He puts a huge amount of thought into what animals get to come along on a particular trip, carefully packs them, then arranges them neatly on his bed when we get to the destination.  This was on my mind as I watched him pack for an overnight with Daddy at Grandma & Grandpa's so that I could have the house to myself on National Scrapbook Day.  So early the next morning (around 4:00 am - I take NSD very seriously!), I made this layout with pictures from the trips we took when Trevor was 2-4 years old: 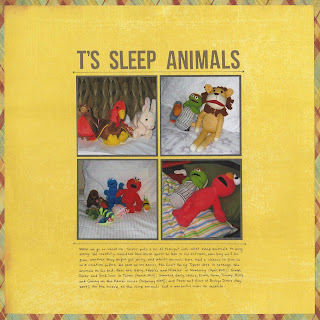 (Inspired by Vanilaa, who used a Cathy Zielske template)


When Trevor was almost four, he and I lined up all of his stuffed animals and took pictures.  My intention was to make him some sort of mini book with the names of all the animals recorded, but his birthday was only a few days after I took these pictures and, of course, he received more animals.  I was not in the mood to set up the black backdrop and record the new animals, realized I could never be caught up with the book, and promptly gave up on the idea.  I decided I'd scrap the 119 animals as they were that day in June 2010.  Nearly three years later, I finally made the layout I'd been thinking about all that time:

I'm so glad to get these pictures out of the photo organizer and onto the pages.  I know the time is going to come, and probably fairly soon, that Trevor is no longer into stuffed animals.  He's given away a bunch that he's outgrown, like the Sesame Street characters.  Eventually, these pictures and our memories will be all that's left of something that was once very important to him. And it makes me really happy that they're in the scrapbook.
Email ThisBlogThis!Share to TwitterShare to FacebookShare to Pinterest
Labels: Layouts, National Scrapbook Day