I'm not a big fan of the cheap trinkets kids get in goodie bags these days.  Trevor likes some of them, but about 75% of the ones he brings home he puts straight into a box to use as geocaching trading items.  It's nice that we can reuse them that way.  I'm guessing a lot of people just put them in the trash.

Considering my opinion of goodie bag favors, it is surprising that I allowed Trevor to talk me into buying these maze puzzles to give out to his friends at his Angry Birds party.  He LOVES mazes and REALLY wanted these.  Because I'm not a total scrooge (just a partial one), I spent the $2 to make him happy. 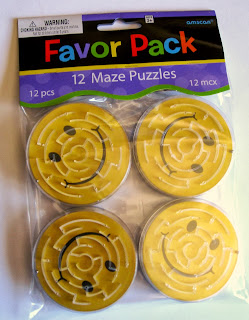 But obviously, these don't fit his Angry Birds theme.  So we carefully pried the smily faces off the back of each maze. 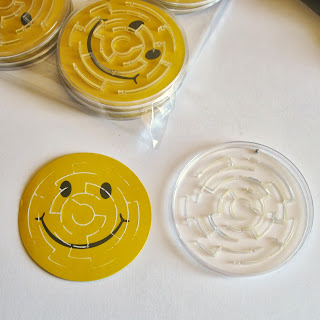 Unfortunately, the yellow and black ink stayed behind.  We used sandpaper to quickly and easily strip it off. 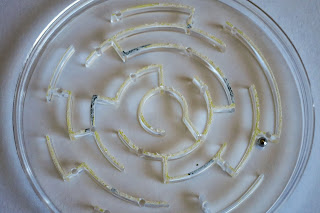 Using the smily face as a template, we made an Angry Bird from cardstock.  Cute!  However, we soon realized that the ball would not roll freely over the lumps and bumps of the cardstock layers.  So we scanned this bird, printed, and then punched out our perfectly flat Angry Birds. 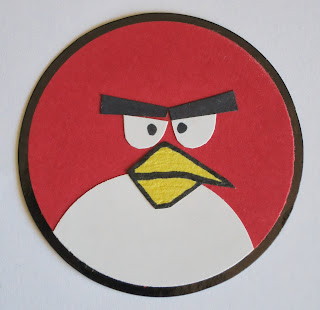 We backed them with black cardstock to give enough heft, then carefully spread white glue on the maze and attached the bird.  Here's what the finished mazes look like. 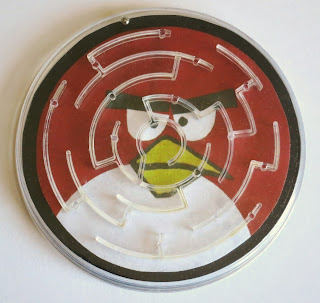 Trevor is thrilled with them.  They certainly took more work than passing out the smily face mazes would have, but now we have a themed goodie bag item.  I just hope they don't end up in everyone else's trash.
Email ThisBlogThis!Share to TwitterShare to FacebookShare to Pinterest
Labels: Crafts for Kids, Parties