It's time for another Flamingo Four!  This month, three other designers and I worked with these four items: 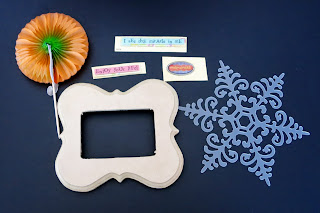 Last month, I struggled with incorporating a very heavy metal clothespin into my project.  This month, it was the cupcake topper that really challenged me.  That and the fact that none of my quotes had any of the same colors as the topper.  Then there's the stencil.  A snowflake stencil would be easy for a winter project, but there are no winter colors in any of the other items... and besides, this is June!


As I played around with the frame, I realized that the opening was the perfect size to hold a gift card.  I popped a Baskin-Robbins gift card into the frame, then noticed that the pink of their logo matched one of the dimensional quotes I needed to use.  I cut down the quote from "Enjoy your life" to just "Enjoy" and started playing around.  What if I used the blue of the logo to paint the frame, then used just part of the snowflake stencil to stamp in pink?  That would have more of a summery tropical feel instead of a wintery snowflake feel.  It took awhile to mix the perfect shade of pink and to decide what part of the stencil to use as a stamp, but with three items used, the project was definitely coming together.

But what about the green and orange cupcake topper that was nearly as large as the frame?  It just wasn't working.  Eventually, I tore it apart.  I used the chipboard hook end and painted it the same blue as the frame and attached it as a hanger.  I cut the tiny bit of green tissue paper from the orange and used it as an accent color.  Here's the finished project: 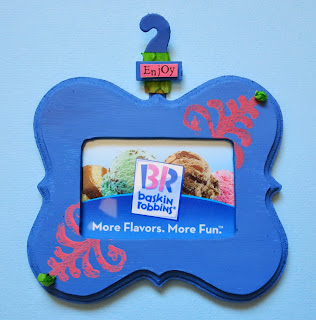 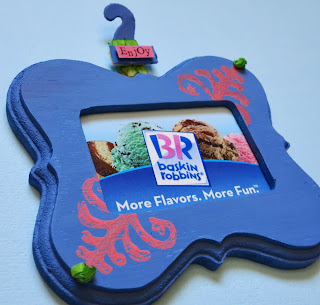 When the gift card is removed, the recipient can use it as a frame. 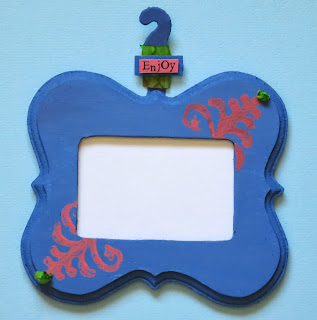 I'm not crazy about this project, but it really pushed me creatively which is always a lot of fun.  I haven't stamped with stencils in ages; that's a technique I need to use again.  To see what the other designers made, head over to Flamingo Scraps.  As usual, the projects are all very different from one another!
Email ThisBlogThis!Share to TwitterShare to FacebookShare to Pinterest
Labels: Flamingo Four, Gift Card Holders