I'm happy to report that Trevor's Angry Birds birthday party was a great success! The only thing that wasn't quite perfect was the weather, as it was 100 degrees for our afternoon backyard party. We ended up moving large portions of the party indoors, alternating things that had to be done outdoors (relay races, piñata, etc) with things that could be done indoors.

Here's the birthday boy, waiting for his guests to arrive. His party hat was so easy to make - we just glued a cut-out Angry Bird face onto a plain red hat. 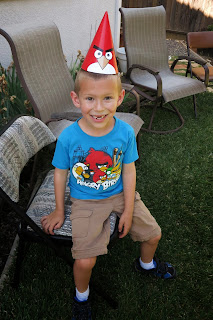 We set up three stations in the backyard: a craft area, a place to play the cardboard tube version of Angry Birds, and a table with Angry Birds Bingo. The kids could choose which they wanted to do and how long to stay at each. Here you can see four kids at the craft table in the back left and three playing live-action Angry Birds. 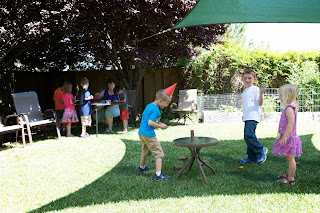 The Angry Birds Paddles the kids made turned out so cute! 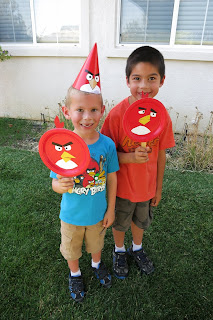 They had great fun using their paddles to play Balloon Ping Pong. The wind kept the game interesting! Unfortunately, the balloons kept popping. But by the time the last balloon had popped, the kids were drenched in sweat, so it was time to quiet down a bit anyway. 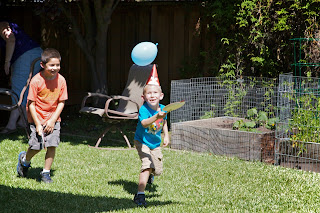 After a brief break for a group picture, I had each child draw a slip of paper from the Blue Bird. It started life as a plastic pumpkin. We spray-painted it blue then glued on a face cut from white and yellow, and orange paper. So easy. 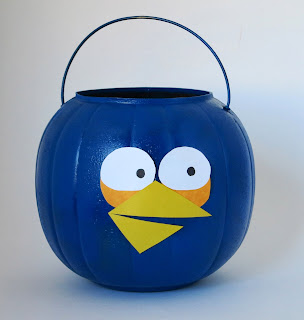 Everyone looked at their slip of paper, which had either a red bird or a black bird on them. This divided them into teams. Their job was to use two spoons (either red or black, depending on the team) to transport a nest of golden eggs to an empty nest across the yard. 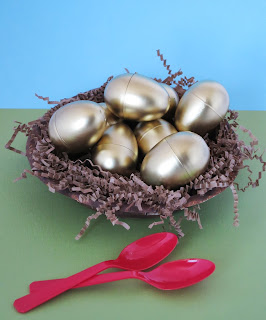 This was a nod to the fact that Trevor turned 7 on the 7th... his Golden Birthday. I wanted to work gold into the party in a way that made sense. The golden eggs were a hit.


The first challenge was for each person to pick up and transport an egg using only two spoons. 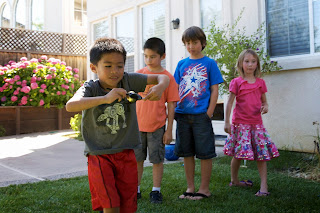 The second challenge was for two people to work together to transport an egg- each holding one spoon with their other hand behind their back. 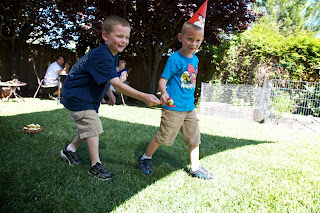 Next, we headed to the front yard to play Pin the Crown on the Pig. It was hilarious. Trevor's crown is the one on the FAR left, nowhere near the Pig! 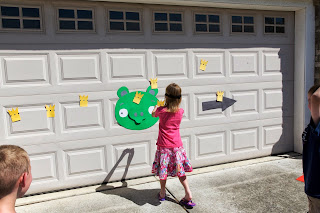 After that, we headed indoors for the Present Game. We played two rounds. 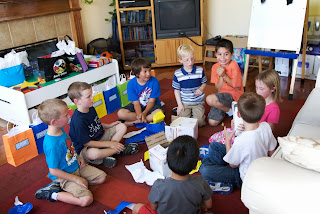 We headed to the dining room to decorate Angry Bird cupcakes. 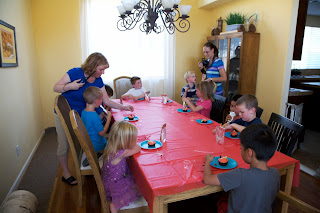 Then we sang to Trevor. Poor guy is still bright red despite being indoors for 20 minutes by then. 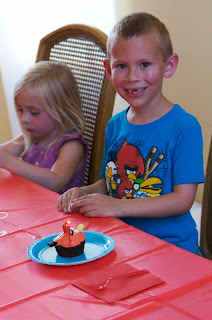 By the time we headed back outdoors, there was a lot more shade in the backyard and a nice breeze had picked up. Time for the piñata! 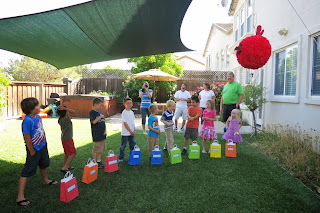 Each child got a turn and we got part way through second turns when the piñata broke. Perfect! After they picked up the candy, they amused themselves by trying on the broken Angry Bird. 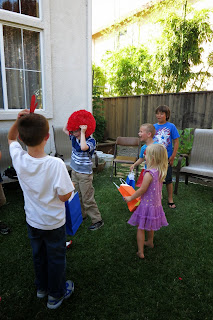 Steve took this picture of Trevor's godfather. I didn't even see him try it on. Love it! 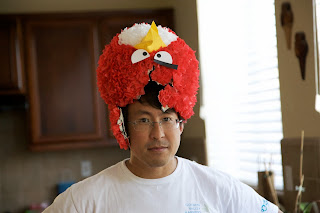 We came back indoors for Angry Birds Pictionary. Each child drew a word related to Angry Birds (pig, mustache, slingshot, etc) and the others guessed. They loved it. 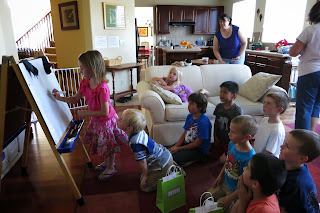 Finally, it was time to open gifts. Check out the backpack that Trevor's godmother made for him.  She said it was her first time doing applique. It turned out so well! 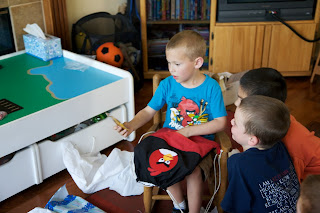 Trevor was absolutely thrilled with his Angry Birds party! I was too. It was a really fun theme and we were able to do it so inexpensively. (We spent about $35 for absolutely everything, including decorations, games, food/drinks, cupcakes, and favors.)

I can't wait to see what Trevor picks for next year's theme. I'd love to do a chemistry/Mad Scientist theme, or a Harry Potter theme, or a camping theme, but he's the boss. Of course, that doesn't stop me from subtly (or not so subtly) making suggestions for the next 11 months.
Posted by Cindy deRosier at 5:00 AM