I'm continuing with my goal to bake my way through the decades of recipes I've torn out of magazines, deciding what to keep and what to recycle. In general, I only share a recipe here on the blog if I've put my own unique spin on it, as is the case today. I came across a recipe for cookies called "Cinnamon Snaps" by Cathy Cain, published in Country Woman (March/April 2001). Basically, they're Ginger Snaps with cinnamon instead of ginger. Intriguing!

I followed the recipe exactly (so totally unlike me) right up until the point where you add the cinnamon. At that point, I split the batter in two, using the kitchen scale to make sure it was evenly divided. I added the cinnamon to one batch (halving it, of course), then baked up the cookies. Delicious! 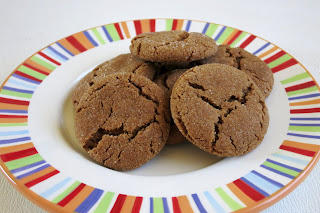 
I went to the cupboard and dug through our spices. Besides cinnamon or ginger, what would be tasty in a cookie? Steve and I had great fun giggling about the possibility of Onion Powder Snaps, Paprika Snaps, Red Pepper Flake Snaps, or Beef Bouillon Snaps. I settled on cloves and measured out a heaping teaspoon into the half-batch of cookie dough. That's a lot of cloves.

I baked up the cookies. Their appearance was identical to the Cinnamon Snaps, as you can see. 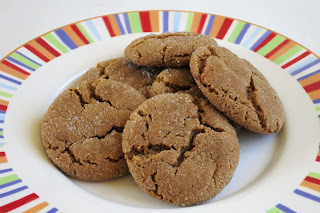 
I brought both sets of cookies to our friends' house. Seven tasters tried each cookie side by side. There was lots of praise for both. Each was tasty and flavorful. The Cinnamon Snaps were far more subtle; the Clove Snaps had a much more pronounced gingerbread flavor (despite having no ginger in them). But as each person announced which cookie they preferred, it was obvious that the Clove Snaps were the clear winner. Here is the full-batch recipe.

Cream shortening and brown sugar. Add egg and molasses. In a separate bowl, combine flour, baking soda, cloves, and salt; gradually add to creamed mixture. Roll into 1-inch balls, then roll in granulated sugar. Place 2 inches apart on ungreased baking sheets. Bake at 350 degrees for 10-12 minutes or until tops are cracked and cookies are set.