If I Were In Charge of the Chopped Baskets...

We are big fans of the Food Network show, Chopped.  Remember the Chopped Challenge I did as part of my 40th birthday celebration?  We still talk about it.  One of these days, we'll do it again since it was totally awesome.  In the meantime, I've become obsessed with thinking about what basket combinations I'd put together if I were in charge.  I've loved the themes they've done recently, particularly the "Wasted" episode from this season.  With that in mind, I've thought of a brilliant (if I do say so myself) idea for Chopped baskets.

My idea was that all four items in each of the three baskets will rhyme.  Seriously, isn't that a great idea?!  All I needed to do was come up with 3 sets of 4 rhymes.  Shouldn't be too hard.  I started brainstorming my list.  At first, it was easy.  I came up with dozens of pairs. These are some of my favorites:


But I hit a stumbling block.  I couldn't think of a third (or fourth) item to go with any of those.  I just kept coming up with more pairs.  For two weeks, new pairs kept popping into my head.  I could not think of a third thing no matter how hard I tried.  I put my list away and stopped trying.  A week later, I thought of my first trio, then another, then another.  Now we're getting somewhere.  Here's two of the trios:


Still, there have to be four items for a Chopped basket.  Three won't cut it.  I kept thinking and thinking and eventually came up with two sets of four.  Then I googled "rhymes with _____" to find a fourth item to go with one of my trios.

I present to you... my Chopped Baskets! 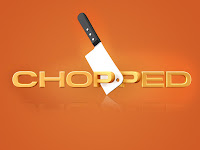 
Something tells me the contestants (and judges) won't be particularly happy about any of them.
Posted by Cindy deRosier at 5:00 AM