Last week, our Cub Scout den leader taught the boys how to cook foil packet dinners (and desserts!) outdoors.  They started by layering a cabbage leaf on top of two pieces of foil, then placed a raw hamburger patty on that.  They added salt and pepper and their choice of onions, shredded carrots, shredded potatoes, and mixed vegetables on top.  (Trevor chose everything except onions.)  They carefully wrapped up their packets, sealing the edges, and then put them on the hot grill for about 30 minutes.

Trevor was so excited to open his up.  It smelled amazing and looked great.  He dug right in and finished the whole thing. 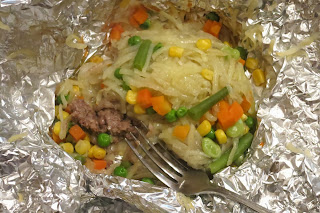 After dinner, they made foil packet desserts.  Each boy put a tortilla on foil, then added either peanut butter or apple pie filling (Trevor chose the apple pie filling), chocolate chips and marshmallows.  They rolled up the tortillas, sealed them in foil, and put them on the grill for about 10 minutes.  They looked, smelled, and tasted fantastic.  Unfortunately, I didn't get a decent picture.

Steve was on a business trip and missed the Outdoor Cooking den meeting.  Trevor begged me to let him teach Daddy how to make them, so right before Steve was due home, we headed to the store to buy our ingredients.  We used the oven to make our "Welcome Home Daddy" meal.  It was a success.

Since Trevor had already tried the apple pie version of the dessert tortilla, he wanted to try the peanut butter version.  It was amazing.  Since then, we've experimented with some other variations.  This is raspberry jam, dark chocolate chips, and two large marshmallows broken into pieces. 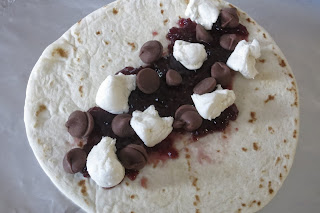 This is peanut butter, raspberry jam, and milk chocolate chips. 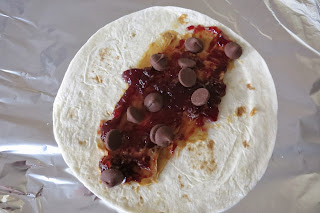 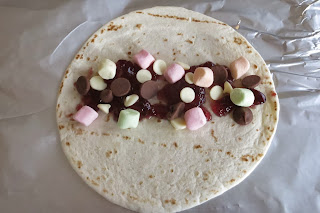