The best part about my job as Editorial Assistant for Fun Family Crafts is getting to see so many awesome and clever craft projects. When I'm reading through blogs, searching through websites, or scouring Pinterest and come across an excellent tutorial that I would like to feature at Fun Family Crafts, the first thing I have to do is search Fun Family Crafts to make sure it (or one just like it) isn't already there. As I scroll through all the projects with the same keywords, my mind is flooded with ideas. Here's one example.

A few weeks ago, I found this clothesline craft at Adventures of an Art Teacher.  It was so cute and each one was so different, which is something I value a lot. I really wanted to feature it. When I searched Fun Family Crafts to make sure we didn't already have something similar, I found this adorable Christmas-themed clothesline craft. I went ahead and submitted the clothesline craft I'd found since it was quite a bit different than the Santa one and now both are on the site.

I was totally inspired to make a Halloween-themed clothesline craft. My friend Kelly was coming over for brunch and a craft morning, so I decided that we could each work on one when she was here. I dug out my scraps and we got to work. Here's what I made: 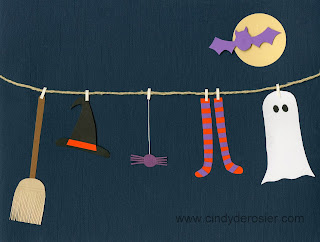 This one is Kelly's: 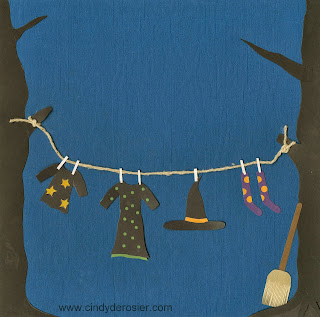 I'd originally planned to have trees holding up my clothesline, but I made my five items first and then didn't have room for the trees I'd envisioned. So I left them out. Kelly took the tree idea and totally made it work. Interestingly, Kelly's turned out much more like I'd originally envisioned the project than mine did!

When he got home from school, Trevor saw my project on the wall and had to put his two cents in. He asked why the witch would hang her broom, why she left space for a spider to dangle down, and why a ghost would hang itself. He was polite, of course, but essentially told me that Kelly's was much better because it made more sense. That's my boy, always logical.

I like them both. And it was really fun. Thanks to Kelly for playing along and allowing me to share her awesome (and logical) artwork!
Email ThisBlogThis!Share to TwitterShare to FacebookShare to Pinterest
Labels: Crafts for Kids, Halloween