When I was a kid in elementary school in the 70's, school lunch meant raising my hand in the morning for Lunch Count, then standing in a long line in the cafeteria, giving the lunch lady the money that I'd carefully kept in my pocket all morning (75 cents, I think, or 25 cents for just milk), and walking along the line as lunch ladies handed me a tired hamburger then scooped ladles of soggy tater tots and grey green beans onto my tray.  I didn't buy school lunch very often.

When I was a teacher in elementary school in the 90's and early 00's, school lunch meant taking Lunch Count each morning, collecting money from the kids ($1.50 for full lunch, 40 cents for reduced lunch and 25 cents for just milk), reconciling the money, and sending the order and money to the office.  I took the kids to the cafeteria, where the correct number of hot lunches and my order form were waiting at their table.  As soon as I passed out the lunches, I was free to leave and eat my own lunch.  I occasionally ate the hot lunch, though not very often.  Some of the items were really good, but most were just ok.  All of them were significantly better than the food from my childhood school lunch experience.

Last year as a first grader, Trevor ate school lunch for the first time.  For him, that meant standing in a line to collect a debit card preloaded with money, swiping it ($2.50 for full lunch, 40 cents for reduced lunch and 25 cents for just milk), and then choosing from one of four entrees.  After collecting an entree, there was a choice of dozens of fruits and vegetables, then a choice of drinks.  He loved everything about it and raved about the food.


After his first school lunch, he came home so excited about it that he asked me to write down how much he loved the chicken with whole wheat roll so that he'd remember to get it every time it was served.  I made a little dot in orange on his menu next to the chicken and shaded in the box.  He thought that was a great system and decided that we'd use green to remember which foods he didn't like.  By April, he'd had school lunch about 45 times (about twice a week) and had only marked a single item green (the whole wheat bagel dog).

Here's the menu from May. 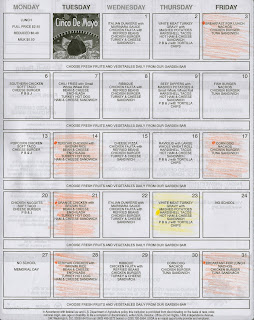 Notice the yellow box?  That is from the day that I ate in the cafeteria with Trevor and his friends.  He'd been asking me to come and try the amazing food, so I did.  We dined on hardshell tacos, an apple and chocolate milk. 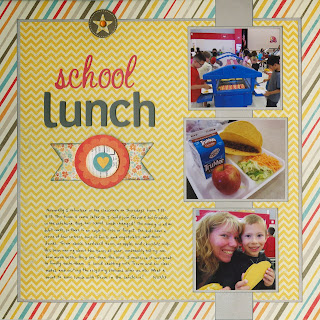 It was really, really good.  I was blown away by the number of choices and the quality of the food.  The produce was amazing.  Now I see why Trevor likes school lunch so much.  Boy, have things changed since I was a kid!
Email ThisBlogThis!Share to TwitterShare to FacebookShare to Pinterest
Labels: Layouts