After all my preparations, I was ready for Day 1 of Lain Ehmann's CreativeLive class, "Scrapbook Your Story." I set my alarm for 4:30 am. No need - my allergies had kept me up most of the night. I showered and dressed, but decided against putting makeup on my itchy allergy eyes. I decided not to style my hair either. There would be plenty of time for both when we arrived at the studio, as we'd allowed nearly 2 hours to travel 32 miles. I grabbed my things and drove to Jennifer's house, 25 miles away.

Traffic was light and I got to her house early. We got on the road toward San Francisco and were making great time. And then suddenly, we weren't making any time at all. The traffic that had been light was suddenly completely stopped. No problem though - we'd allowed PLENTY of extra time. We were 8 miles from our destination with 1.5 hours until we HAD to be there. Thirty minutes later, we hadn't moved an inch and we were starting to worry. The radio announcers were saying it was the worst traffic they'd seen in awhile. We called in to CreativeLive to say that we were stuck in the MacArthur Maze making no progress. Jennifer was calm and collected, but I was freaking out. I HATE being late for anything, but there was nothing I could do about it. Finally things opened up. We got to the parking garage 20 minutes after the absolute latest time we were to be at the studio. Ugh. We parked, grabbed our stuff, and ran. We zoomed into the studio, having missed breakfast, the orientation meeting, and the audio prep. The sound guy grabbed us and put on our mics, then we had 5 minutes before we had to be on set. I ran to the bathroom, threw on mascara, and decided my hair was good enough. I stored my stuff and zipped to Studio D. Whew! Time for a quick selfie before heading in. 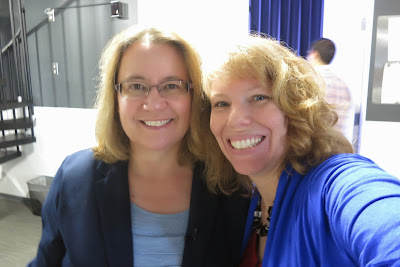 We had assigned seating, so I didn't end up next to Jennifer. The other audience members had met at breakfast and the orientation, but since we'd missed that, I didn't have more than a second to introduce myself to my tablemate Traci. I didn't know it at the time, but she's a big-time designer. Lain calls her "THE Traci Reed." 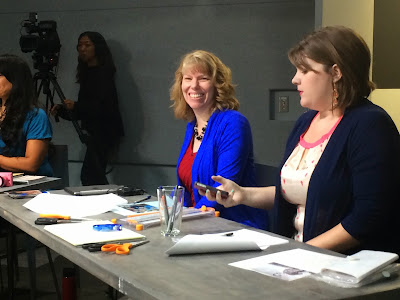 Jennifer was on the far left, seated next to Denise. 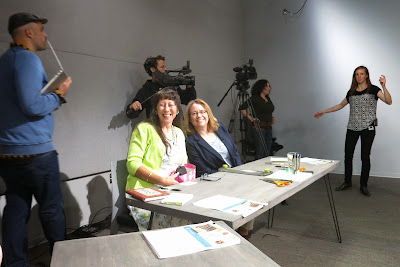 A minute or so later and we were live. The hosts, Chris and Sally, introduced the workshop and then had each of us introduce ourselves. 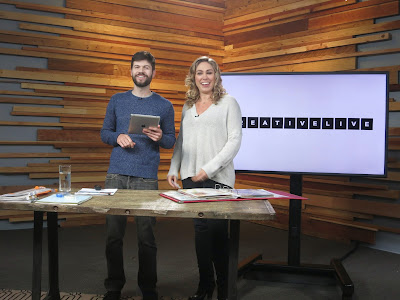 They introduced Lain, then headed over to the host desk to my right, where they monitored the chat room and fielded questions for Lain. 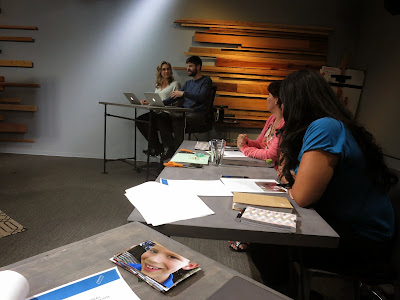 Next, we wrote our scrapbooking mission statement. Mine is: "To me, scrapbooking means creative memory keeping. I scrapbook for myself and my family so that we can remember all the wonderful things we've done, places we've gone, and people we love." I was surprised by the variety of answers. It's fun to hear why different people scrapbook.

I wasn't sure if it was OK to take pictures during filming, but once I saw others doing so, I snapped a few. None of Lain, as I didn't want to distract her, but a few of my fellow audience members. Here is Denise sharing her mission statement. You can see the red light on the camera indicating that it is live. (There were 4 cameras.) 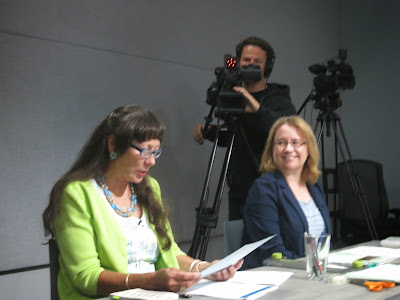 When the first segment ended and a 15 minute break was announced, I headed to the cafeteria in hopes of finding a snack and something to drink, since we'd arrived too late for the amazing breakfast of made-to-order crepes (one of my favorite foods). When I returned, I took this quick photo of the empty studio. 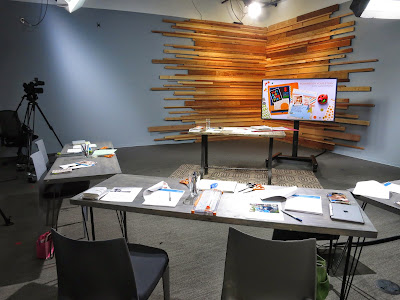 ... and then one of the lobby that we'd ran through earlier that morning. 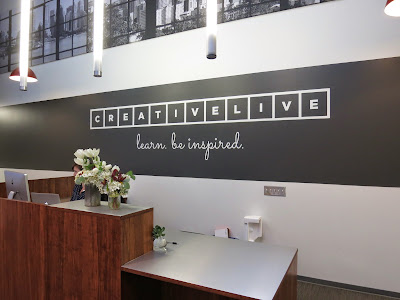 And then it was time for the second segment. I snapped this quick photo of Lain and Chris just before we went live. 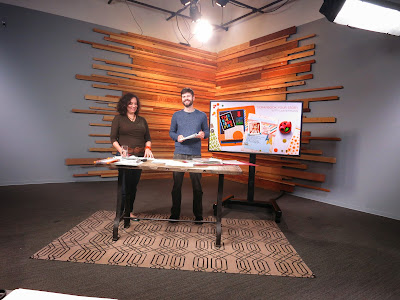 When that segment ended, it was time for lunch. The food was amazing. I had a mozarella and tomato sandwich that was to die for. The salads and homemade potato chips were awesome. It's worth it to be an audience member at CreativeLive if for no other reason than the food! 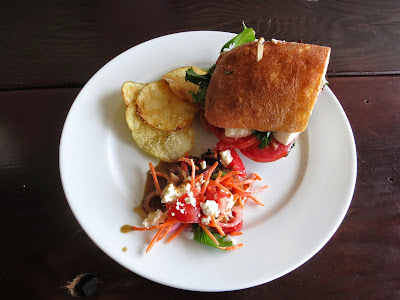 Our next segment was called, "Journaling - The Key to Capturing Stories." I've never had a problem thinking of stories to scrap or what words to use. If anything, I have to edit my thoughts to fit my story on a page. That's part of what I love about blogging - no space limits!

The fourth and final segment for Day 1 was about photography. Our guest presenter was the amazing Katrina Kennedy. Here she is (on the left) with Lain and Chris, minutes before the segment went live. When I think about the components of scrapbooking (photos, design, journaling, etc), photography is my weakest by far. So this segment was especially valuable to me. 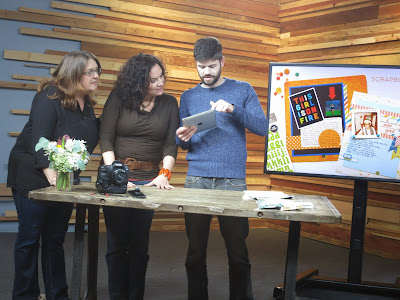 Then, just like that, the day was over. It went so quickly! My mind was a blur - so much inspiration. Lain is an amazing teacher. 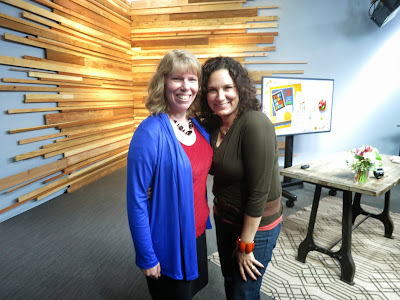 Since this was Katrina's only day with us, we wanted a group photo with her in it. From left: Jennifer, me (Cindy), Jane, Lain, Katrina, Denise, Angela, and Traci. 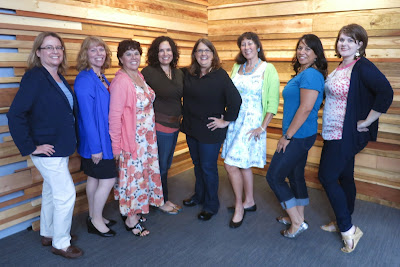 What an incredible day!
Email ThisBlogThis!Share to TwitterShare to FacebookShare to Pinterest
Labels: CreativeLive, Jennifer