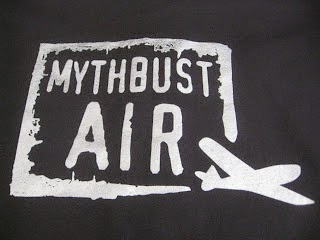 I can't tell you what a thrill it was when our Mythbusters "Traffic Tricks" episode aired last week! We'd been waiting for so long.... 1 year 7 months, to be exact. It was so much fun to watch and even more fun to finally be able to talk about our experience as volunteers. I love that so many of you watched and that some of you even spotted me. If you saw the episode, you might enjoy watching the Aftershow as well. I found it fascinating. And I spotted myself, which made it even more cool.  :)

You may recall that being a Mythbusters volunteer was originally one of the 40 Things I did to celebrate my 40th birthday and that I accomplished that goal in May 2012. The episode we filmed was called "Plane Boarding." It aired in several other countries, but not here. For 2 years 3 months, we have been waiting to see our episode. Finally, FINALLY, I just got an email letting me know that "Plane Boarding" is airing next Thursday!!!

The "Plane Boarding" episode airs Thursday, August 21. According to the website, it will be at 9:00 PM Eastern and 9:00 PM Pacific. Obviously, check your local times, as there appears to be a lot of difference in when things are aired.

After it airs, I'll blog all about our experience with all the behind-the-scenes details. I am so excited!!
Posted by Cindy deRosier at 10:40 AM