Steve and I have been volunteers for Mythbusters twice: first, for an episode called "Plane Boarding" in May 2012 (which has yet to air in the US); and second, for an episode called "Traffic Tricks" in January 2013, which aired last Thursday. It has been torture waiting for so long. We applied for "Traffic Tricks" in November 2012. Steve was accepted; I was rejected. (More about that, and how I was eventually accepted, here.) The good news is that now that "Traffic Tricks" has aired, Steve and I can finally talk about it!

We filmed different experiments and on different days (see link above), so our experiences were completely different. Since Steve went first, I'll summarize his experience before sharing mine.

Steve's day of filming was on January 10, 2013 in Alameda, about 50 miles from home. He reported to the Alameda Naval Air Station (often mentioned on Mythbusters as one of their favorite locations). It was a bit tricky to find the exact location, as they obviously avoid putting up signs that might let the random public know a Mythbusters episode is being filmed, but the directions they provided were detailed and he arrived in plenty of time. After checking in, Steve joined the other cars parked in rows and went to the volunteer tent where they had heaters (his light jacket turned out to be totally insufficient for the really cold and windy weather). A lot of people stayed in their cars instead of going to the tent because it was so cold. Steve joined the few brave souls huddled around the heaters and learned that many had been in the airplane boarding episode with us (as it turned out, at least half of the day's volunteers). They speculated about the day's experiment (something to do with driving, obviously, but that was all they knew). They also wondered whether they'd be working with Adam and Jamie or with Tory, Grant, and Kari.

After a long wait, they found out the answer. Jamie arrived with some crew members to explain that they were doing an experiment about traffic. Each car would be equipped with rooftop brake lights attached to a sensor on the brake pedal. They would also have a magnetic number on the car roof. The crew started installing the equipment. It took a really, really long time. After about 90 minutes of waiting, Steve and some of the other volunteers jumped in to help cover the license plates, logos, bumper stickers, and any other identifying features on the cars with tape. Finally, they were ready to begin. 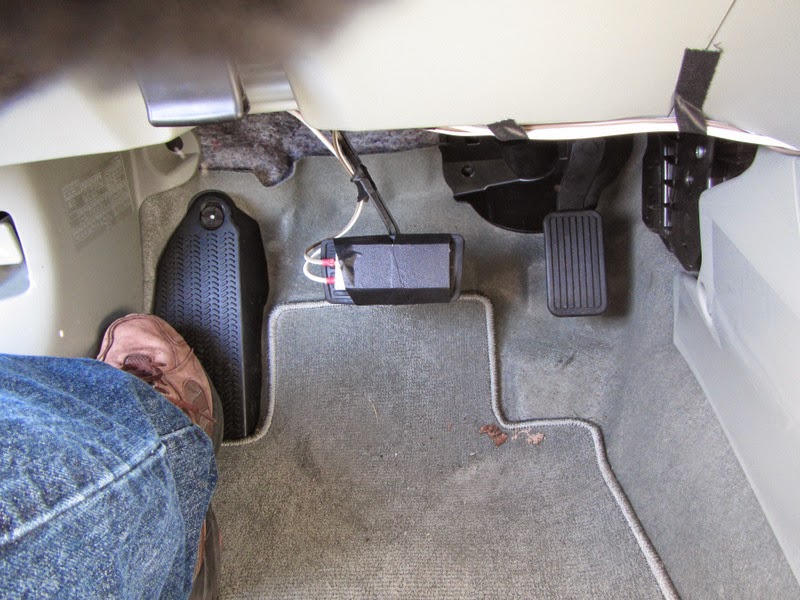 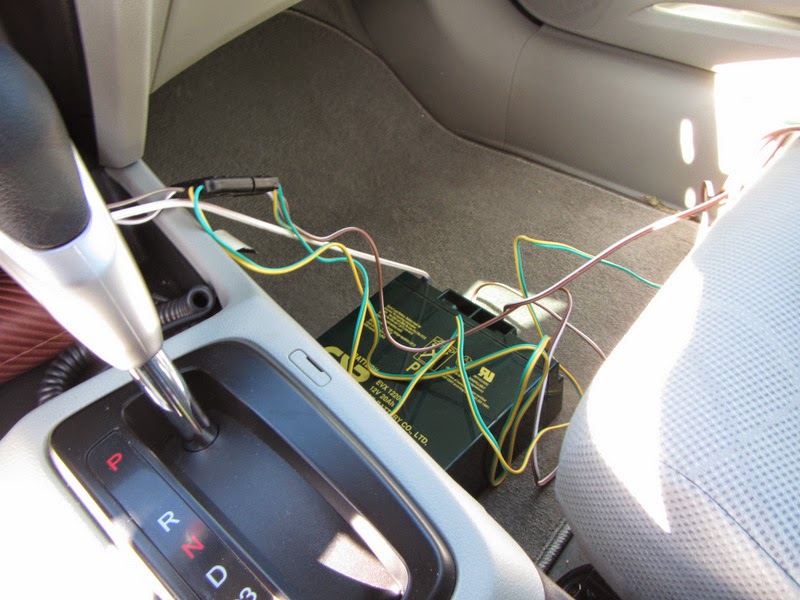 Here's what the top of Steve's car looked like: 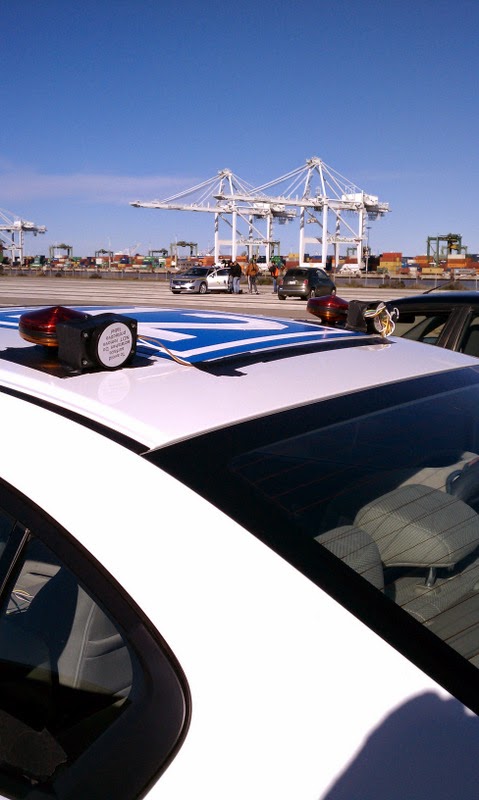 The producers randomly selected a handful of cars to start the first experiment. Unfortunately, that did not include Steve. More waiting. They stopped the experiment and made adjustments to everyone's rooftop brake lights to reorient them a different direction. All of that took so long that it was already time for lunch! The volunteers enjoyed a really tasty and generous spread of pizzas and sides.

After lunch, everyone got in their cars and were directed into one long line behind Jamie, headed down the runway. They waited. And waited. And waited. Jamie got out of his car and chatted with each volunteer down the line. Eventually, Jamie got the word that it was time to begin. The drivers followed him into the circle. They were instructed to reach 20 MPH, but it didn't work. No matter how hard they tried, there were so many cars in the circle that they simply couldn't reach the desired speed. The producers removed a half dozen cars from the circle (not Steve, thank goodness) and tried again. Success! They reached 20 MPH. Steve and the other volunteers had no idea what the experiment was about, beyond the obvious fact that it was something about braking. They were told to drive as fast as possible, without hitting anyone, braking only when necessary. This continued for almost an hour.

When the experiment ended, they filmed a couple sessions of directed honking (one of which was aired). They also did several takes of the cars going around in the circle very slowly, before having the cars filter out and head back down the runway toward the volunteer tent (a good mile from where the experiment took place).

Finally, the volunteers were reoriented so the cars were abreast, then they were directed to drive in a flying V down the runway. Steve was very disappointed that that particular maneuver wasn't aired! Me too - it sounds really cool.

When the filming was done, each person posed for a photo with Adam and Jamie. 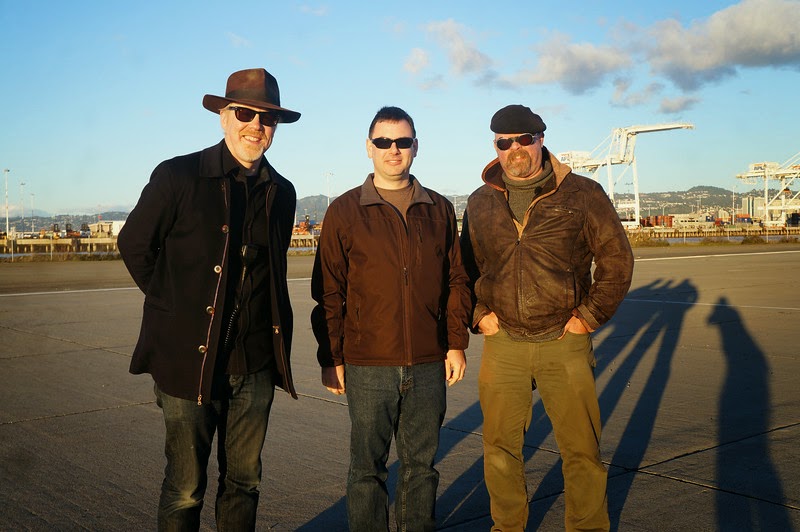 After photos, each volunteer was asked to remove the brake light equipment and tape from their own cars. Steve and the other volunteers were dismissed around 4:00 pm, which put them smack into the terrible Bay Area commute traffic headed home. Ironic!

Overall, Steve enjoyed watching his segment on TV. He was very disappointed that an entire day of filming ended up as only 5 minutes on the show and that cool things they'd filmed were cut. When watching the show live, I thought I'd spotted Steve, but a slow-motion replay on the TiVo proved me wrong. Steve's car got a decent amount of airtime though!

My day of filming was on January 16, 2013 in Benicia, about 20 miles from home. Even though it was a bright, sunny day, I dressed in lots of layers, knowing that it is often very cold and windy in Benicia and that Steve had frozen in Alameda. I made sure not to have any logos or any other forbidden clothing. I arrived to the location (an unmarked huge fenced-in paved area by the refinery) about 10 minutes ahead of the 8:00 am call time. I checked in and headed to the volunteer tent for hot cocoa and treats.

The volunteer tent was on one side of the huge lot. We had some seating and a heater, though it was not large enough nor hot enough. Despite our layers and being in a tent, we were freezing! (Yes, I realize I'm complaining about 45° weather, when that is downright balmy January weather for some of you. Sorry.) We were encouraged to help ourselves to any of the snacks, treats, and drinks, both cold and hot. Everyone was really friendly; we all immediately started swapping stories about previous experiences volunteering for Mythbusters (about half the volunteers were returners) and trying to guess what the day's myth would be. At this point, all we knew was that we needed to have a non-descript car and a valid driver's license. We were all dying to find out whether we would be working with Adam and Jamie, or if it would be Tory, Grant and Kari.

As we were speculating, one of the volunteers standing at the door of our tent told the rest of us to come look. Far on the other side of the lot, we could see people emerging from trailers. Adam and Jamie! Adam zoomed the opposite way on a Segway. Jamie walked our direction, stuck his head in our tent, and shook hands all around. Exciting!

For the next hour, the production assistants went over each of our cars very carefully, using tape to cover all logos, license plates, bumper stickers, and any other identifying marks. Each car was given a magnetic number for the hood or roof. Here's my car, prepped and ready... (actually, it's Steve's car... this was only the third time ever that I'd driven it, including the test drive): 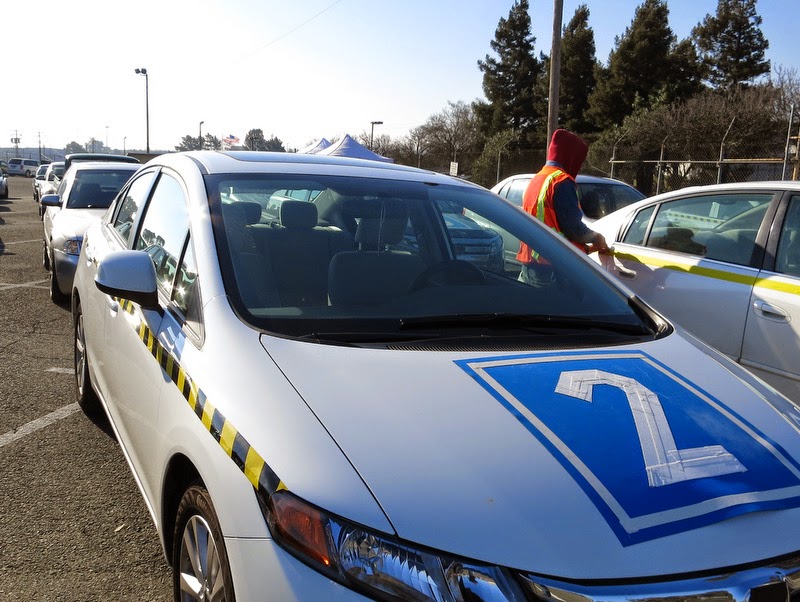 Finally, all the volunteers were called over for a safety orientation. We were given basic instructions and told that we would be doing at least two experiments. We waited and watched while they set up our course and the hosts did some filming.

We were told that we would be testing the efficiency of 4-way stops. We were to drive around the large exterior circle, entering the next street clockwise. When we approached the stop, a flipped sign would tell us whether to turn right, left, or go straight. We would follow that instruction, exit into the exterior circle clockwise, and repeat that for 15 minutes. But first, we filmed an entrance sequence. I was chosen (randomly) to lead the huge line of cars up and over a hill and into the filming area after Jamie announced to the camera that he'd need some volunteers. I was really disappointed that it ended up on the cutting-room floor.

We did a warm-up to be sure everyone understood the directions and to get rid of nerves, then the experiment began. Around and around we went for 15 minutes. It went smoothly and easily. Jamie blew the horn to end the experiment and told us that they'd gotten good data, but wanted to repeat it. We ran the experiment once more and were told the results were almost identical to the first round.

Unlike the first time I was a Mythbusters volunteer, we were not forbidden to take photos. However, we were not encouraged to take them either. I was very careful to not disturb anyone's work or to do anything that might be pushing the limits. Consequently, I only took about 8 photos all day long. Here are a few I took while the hosts were filming and we were told to hang out in our cars: 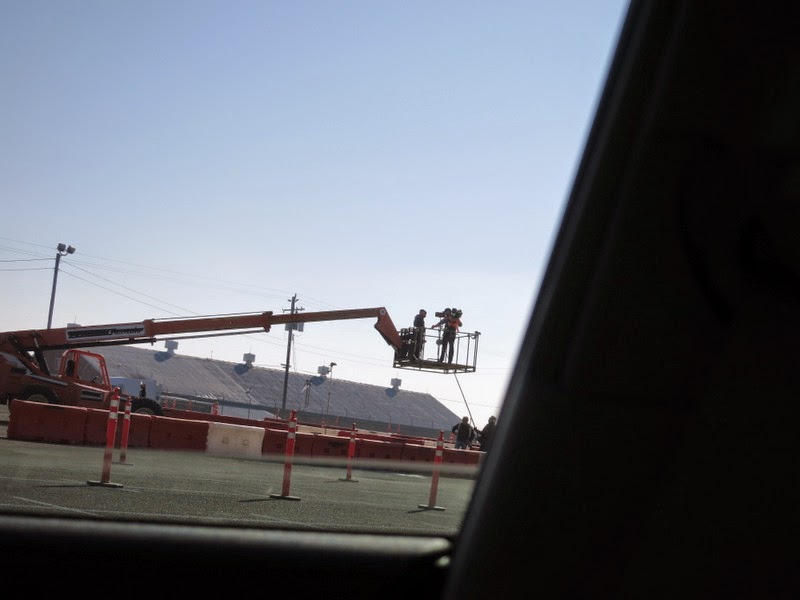 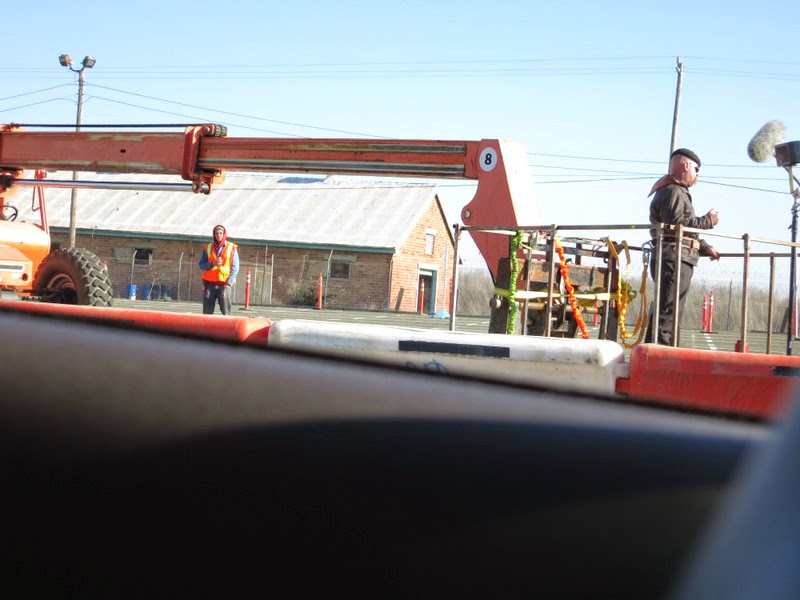 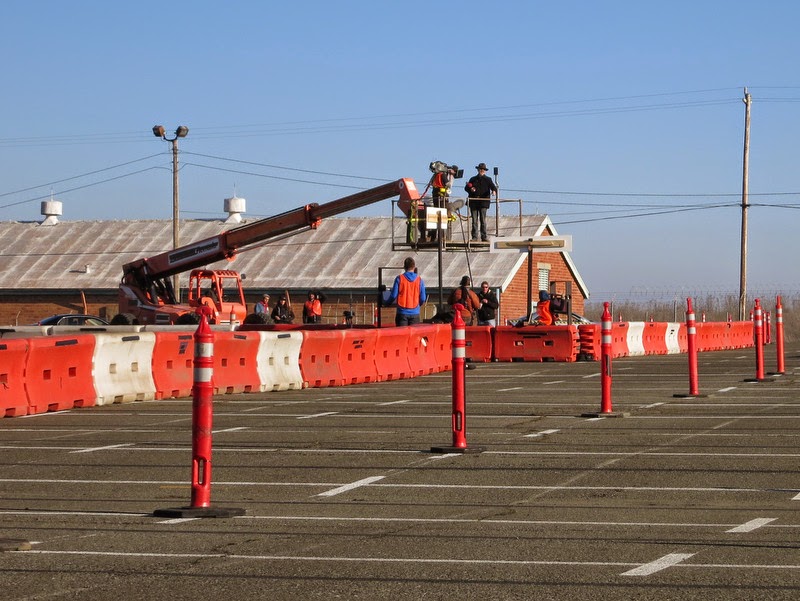 Next, we took a break for lunch. They fed us really good pizza in our tent. Adam and Jamie did not eat with us; I wonder if they had pizza too, or something different. The production assistants each ran in to our tent to grab some pizza before zooming off to prep for the next experiment.

After a long wait, Jamie emerged dressed as a traffic cop. They told us that we'd be repeating the experiment, but instead of following the usual practice of having the first to stop go first, we'd be following Jamie's directions as he stood in the center of the intersection. We practiced, then the experiment started. If you watch the show regularly, you know that Jamie has had many different interesting careers and hobbies over the years and has thousands of talents, but I can assure you that directing traffic is not one of them. He was immediately overwhelmed and became frazzled, which is so unlike him. It was obvious to us all that the proper 4-way stop was FAR more efficient than Jamie's directing. I'm very curious what the results would have been if we'd had an experienced, trained traffic cop directing us.

We waited as Adam and Jamie filmed more, then the producer called us over for photos. She took a photo of each of us with Adam and Jamie, which I just saw for the first time on Thursday (1 year 7 months after it was taken). 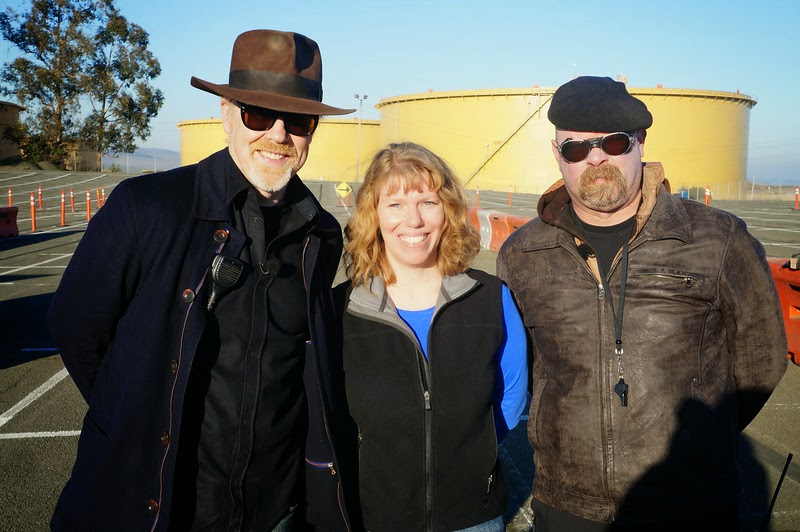 Watching the episode, especially after so much time had passed, was surreal. Our segment went by so quickly. It was shocking how little of the filming actually made it on the show. I did see the car lots of times and even spotted myself briefly.

The whole experience was amazing. I'd volunteer again in a heartbeat.

Any questions?
Email ThisBlogThis!Share to TwitterShare to FacebookShare to Pinterest
Labels: Mythbusters