The deRosier Naan Challenge of 2014

On Friday, Steve's coworkers held an event at the office called "Sides and Wine." Each employee was invited to make a dish to share, which would earn them the right to eat for free. Anyone who didn't bring a dish would pay $5 to eat. Similarly with wine: those who brought a bottle would drink for free and those who did not would pay $10. They also had a 50/50 drawing. All money collected went to the Food Bank. One talented person's food would win the coveted title of Favorite Dish.

Steve was eager to participate. But there was a problem. The event was in Ohio where the office is and Steve (who works remotely 95% of the time) was at home in California. So naturally, we held our own deRosier version of the event to coincide with theirs.

We'd just been to Costco and picked up a pack of their tasty-looking fresh naan bread, so we decided that each of us would create a dish using naan. We did a quick grocery run, then Trevor was up first. He made some failed attempts to slice the naan open like a pita, then eventually cut the naan into squares and popped it in the toaster oven. Then he made some guacamole. Under his direction, I helped him safely slice, marinate, and cook very thin strips of flank steak. 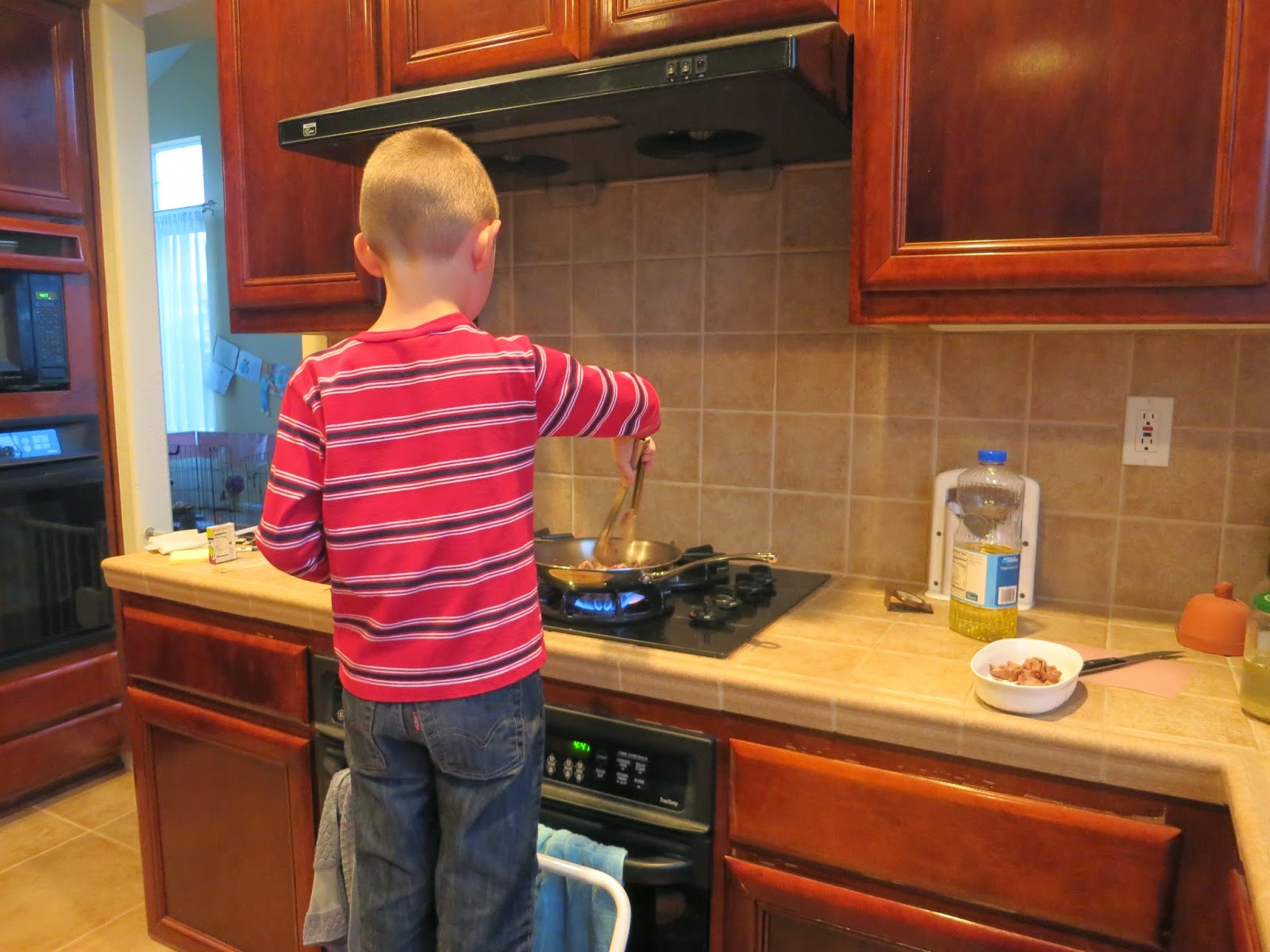 He put down one square of toasted naan, topped it with torn pieces of romaine, put steak on top of that, then added the second square of naan. He decorated the plate with his guacamole, some salsa, and sour cream. 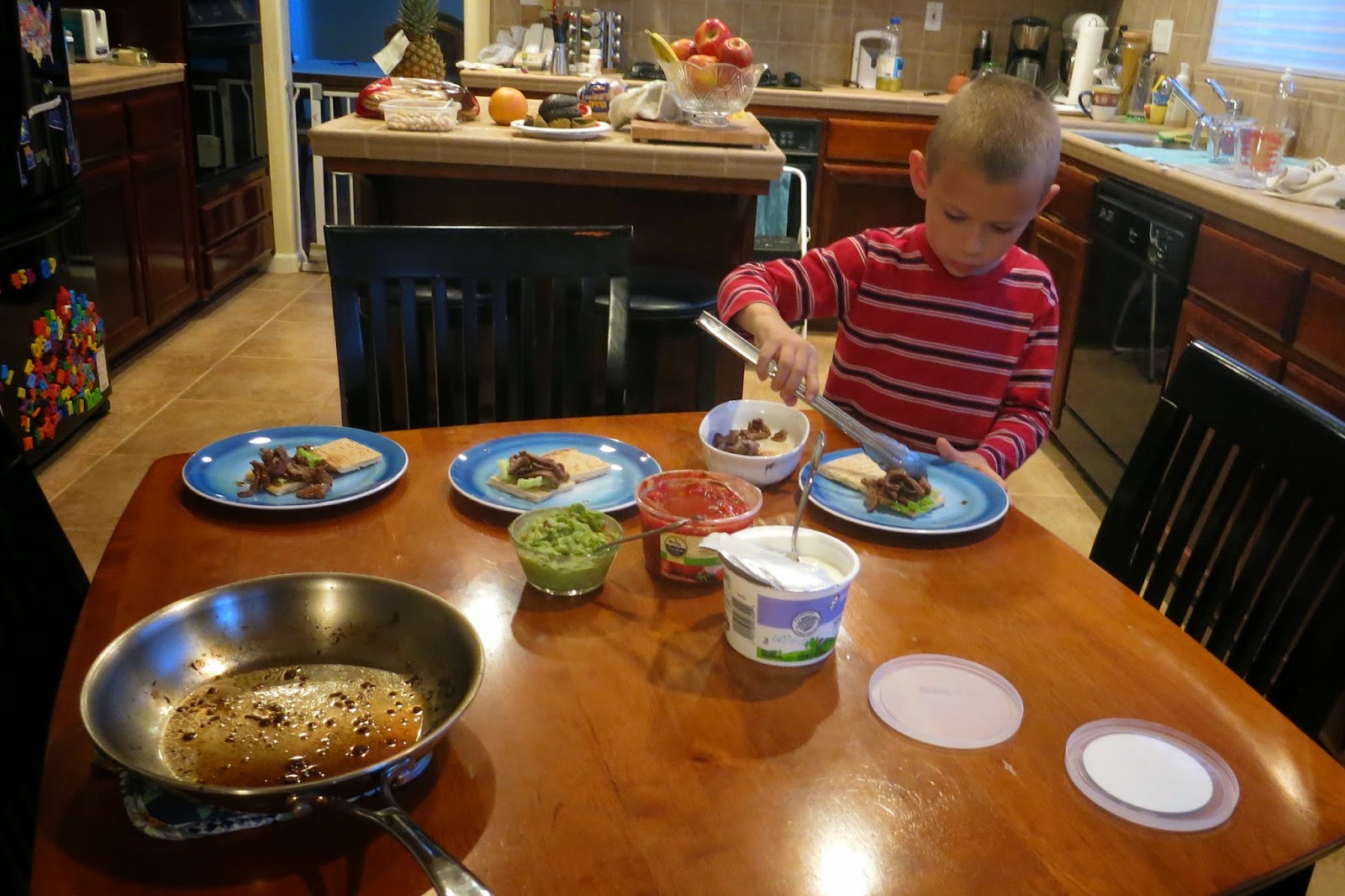 Here's what his Fajita Sandwich looked like. It's a happy face, if you didn't notice right away. (Ignore the glare on the plates. It gets dark well before dinner time in November.) 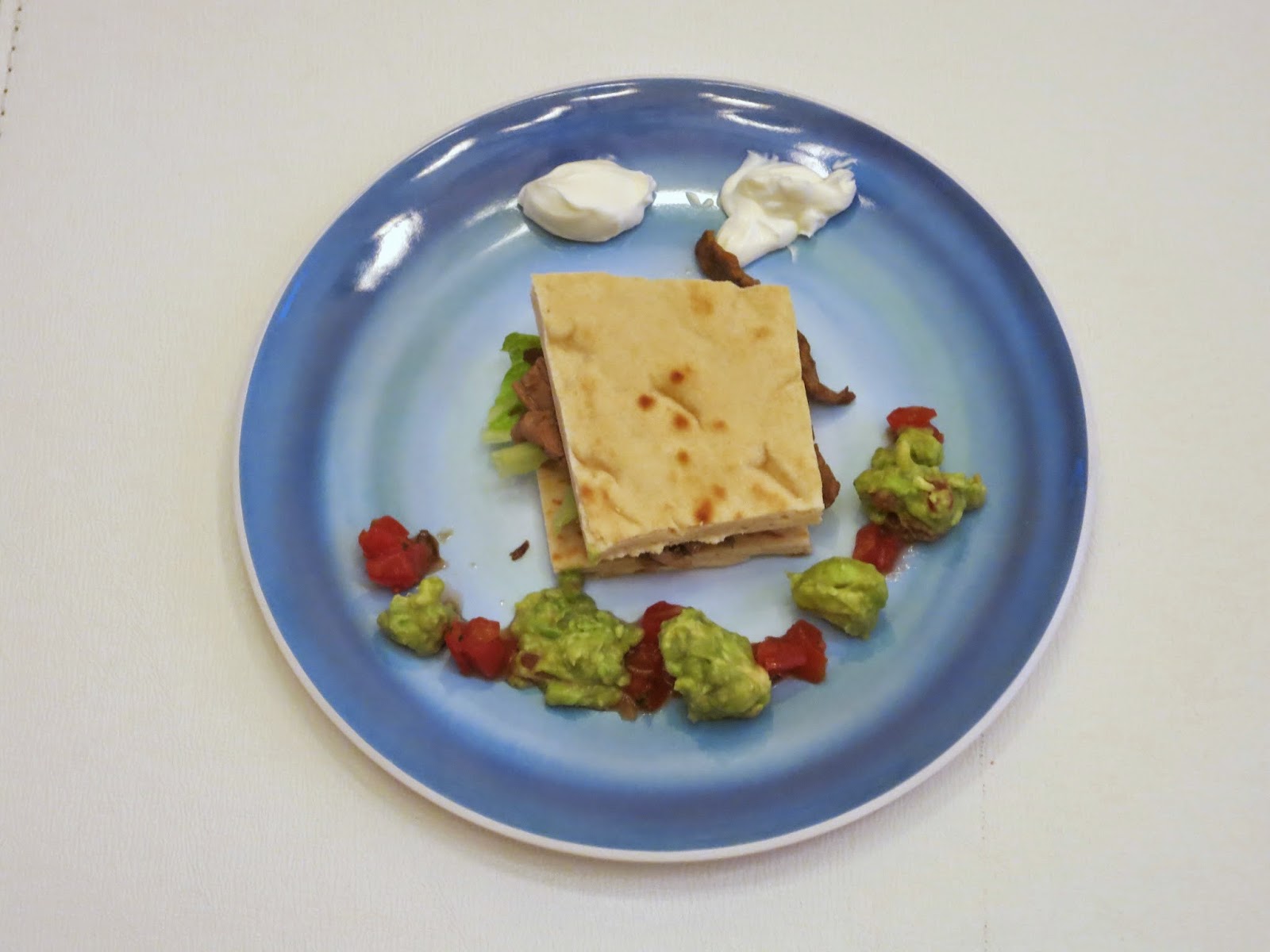 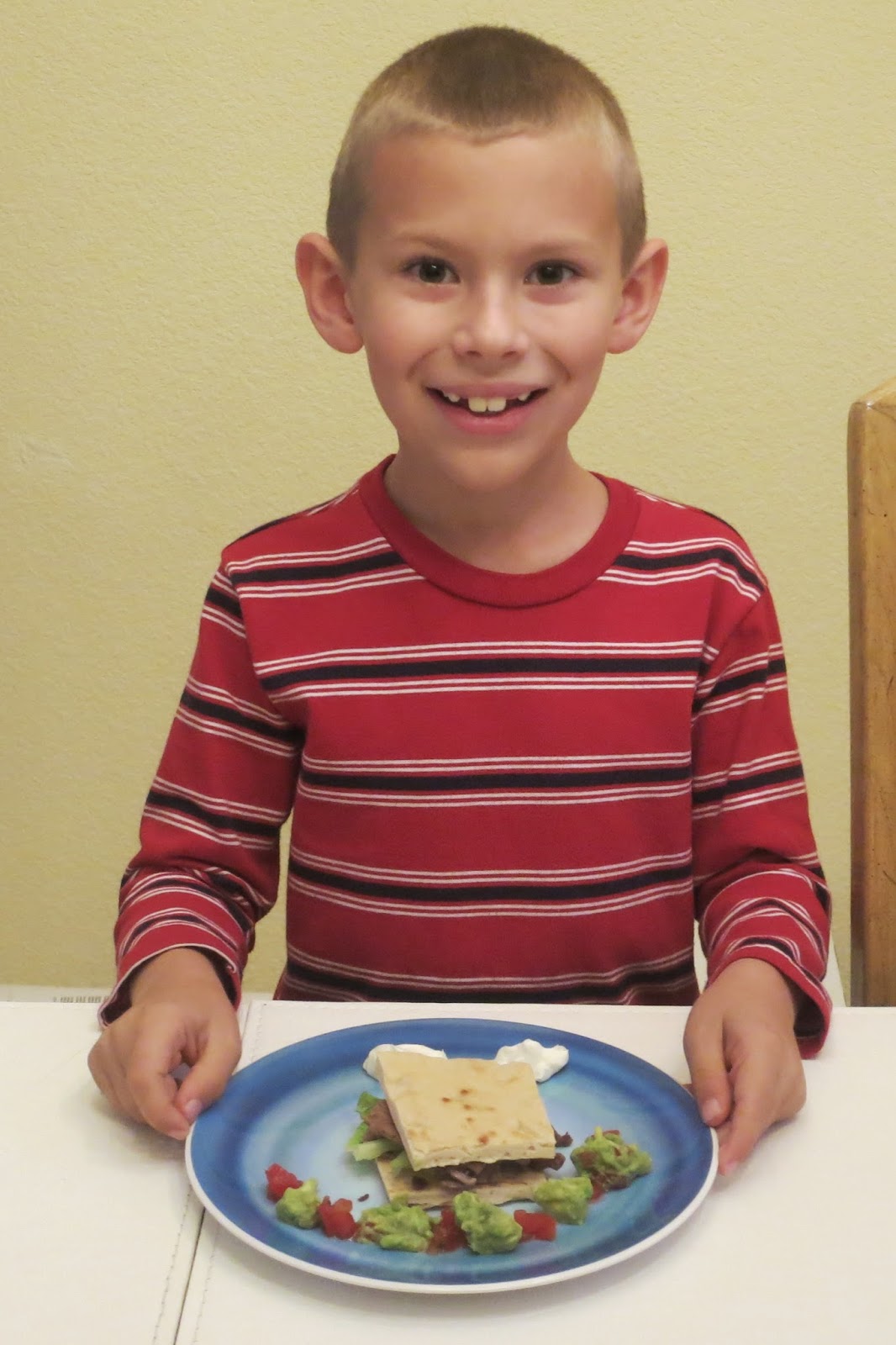 We ate Trevor's course and discussed its merits. Trevor decided that the most fair way to judge this contest would be for the two people who did not make the dish to each give it a number from 0-5, then whoever got the most points from the other two would be the winner. I wanted to give Trevor's a 5 because it was REALLY good, but I wanted to leave some room at the top in case Steve's was even more amazing. So I gave Trevor a 4 1/2. Steve gave him a 4, giving Trevor an impressive 8 1/2.

Next to serve was Steve. I didn't take any photos of him cooking, mostly because I was prepping my dish at the same time. Steve made naan pizzas. There's a whole pizza of ham and pineapple (the only pizza that all three of us like), one with pepperoni on one half and salami, pepperoni, and olives on the other. 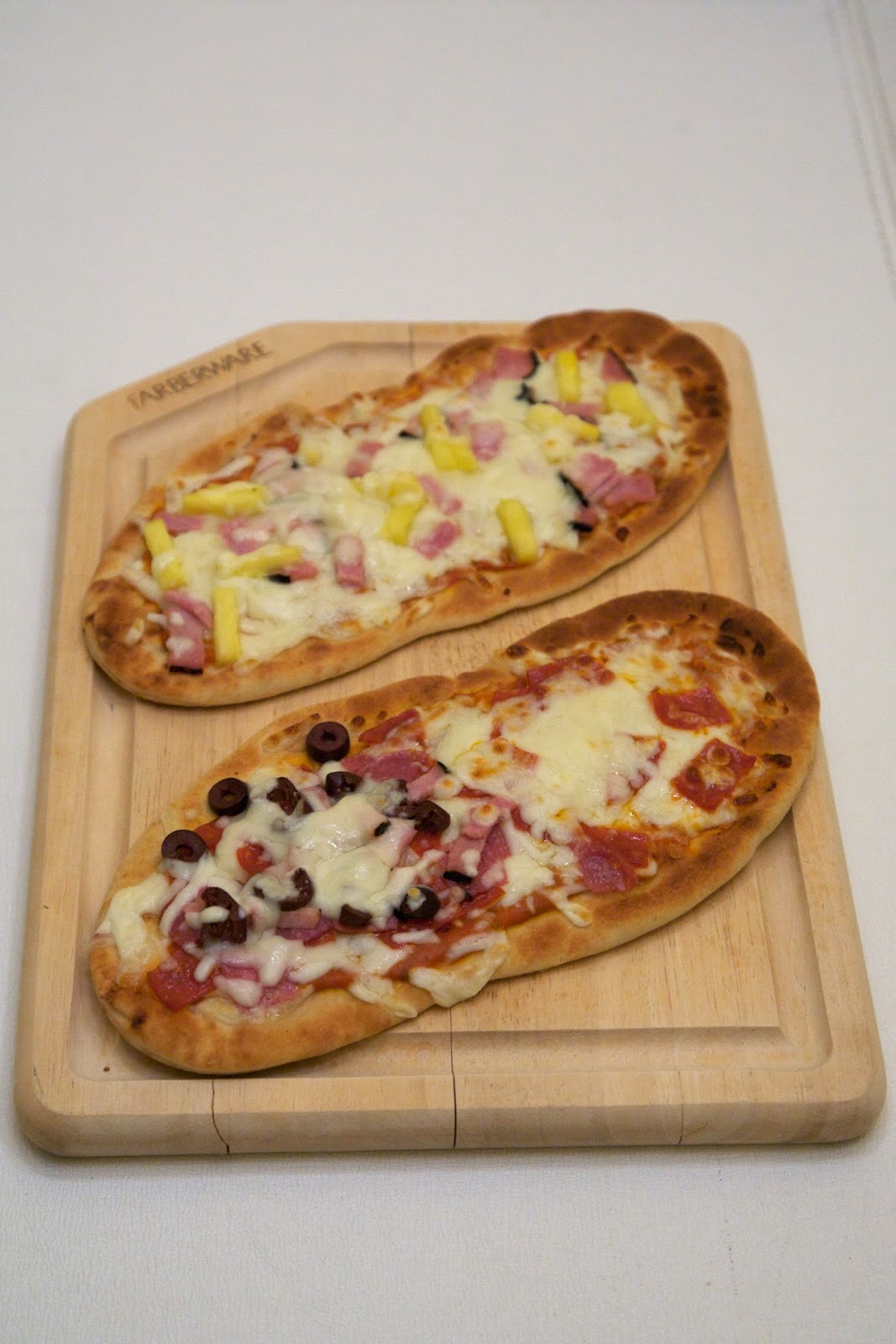 Here's Steve with his pizzas. 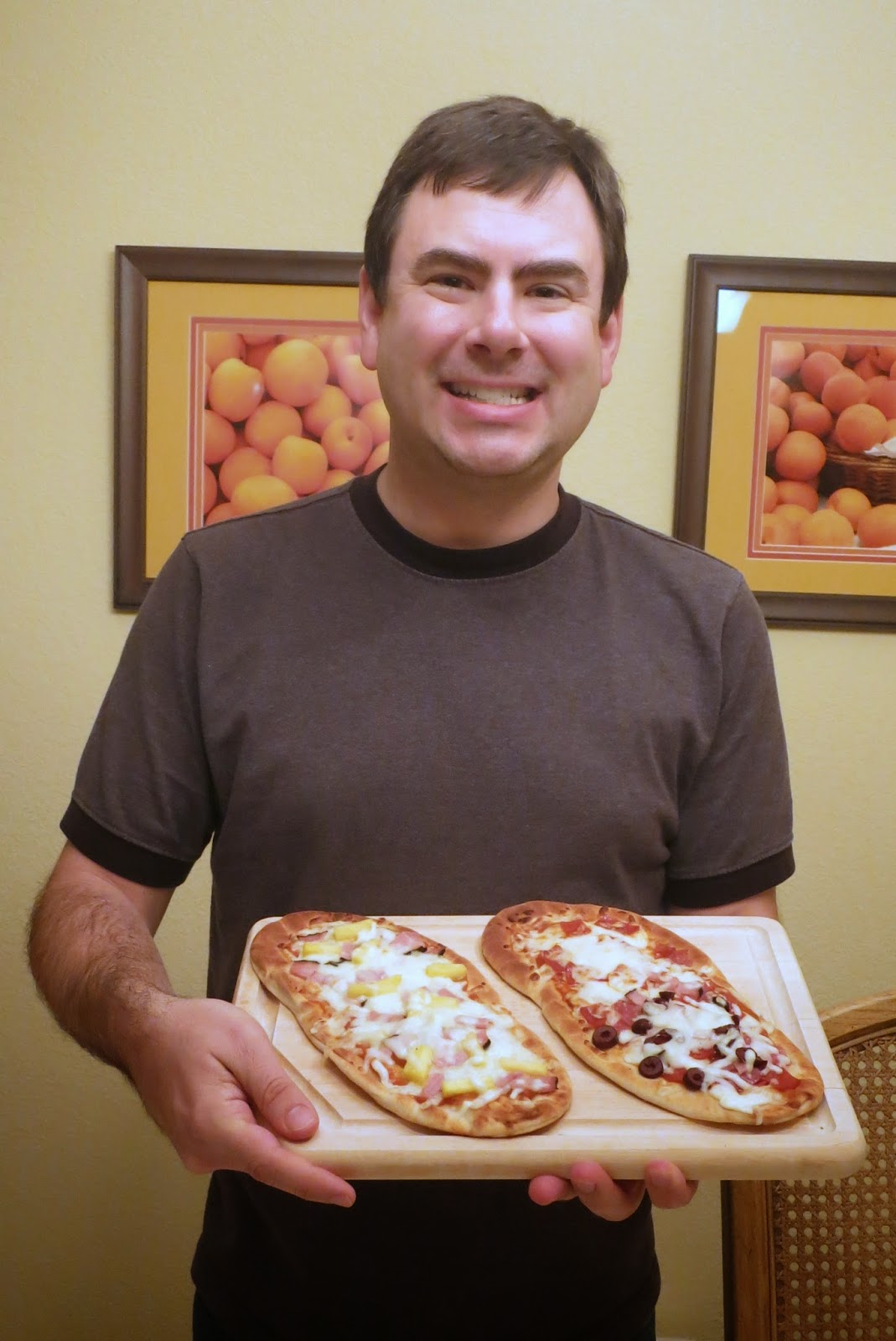 They were REALLY good. I went back and forth deciding if they were better than Trevor's. In the end, I decided that I liked both dishes the same (which is to say, a LOT). I gave Steve a 4 1/2 and Trevor gave him 4 7/8, which moved Steve into the lead. It would be extremely difficult to beat 9 3/8, but I was up for the challenge.


I cut the naan into circles and triangles. I toasted those, then brushed them with melted butter and sprinkled a generous amount of cinnamon and sugar on top. I gently sauteed apples in a little bit of butter, then soaked them in a sauce of reduced apple cider, brown sugar, cinnamon, and vanilla. I added a dollop of whipped cream. 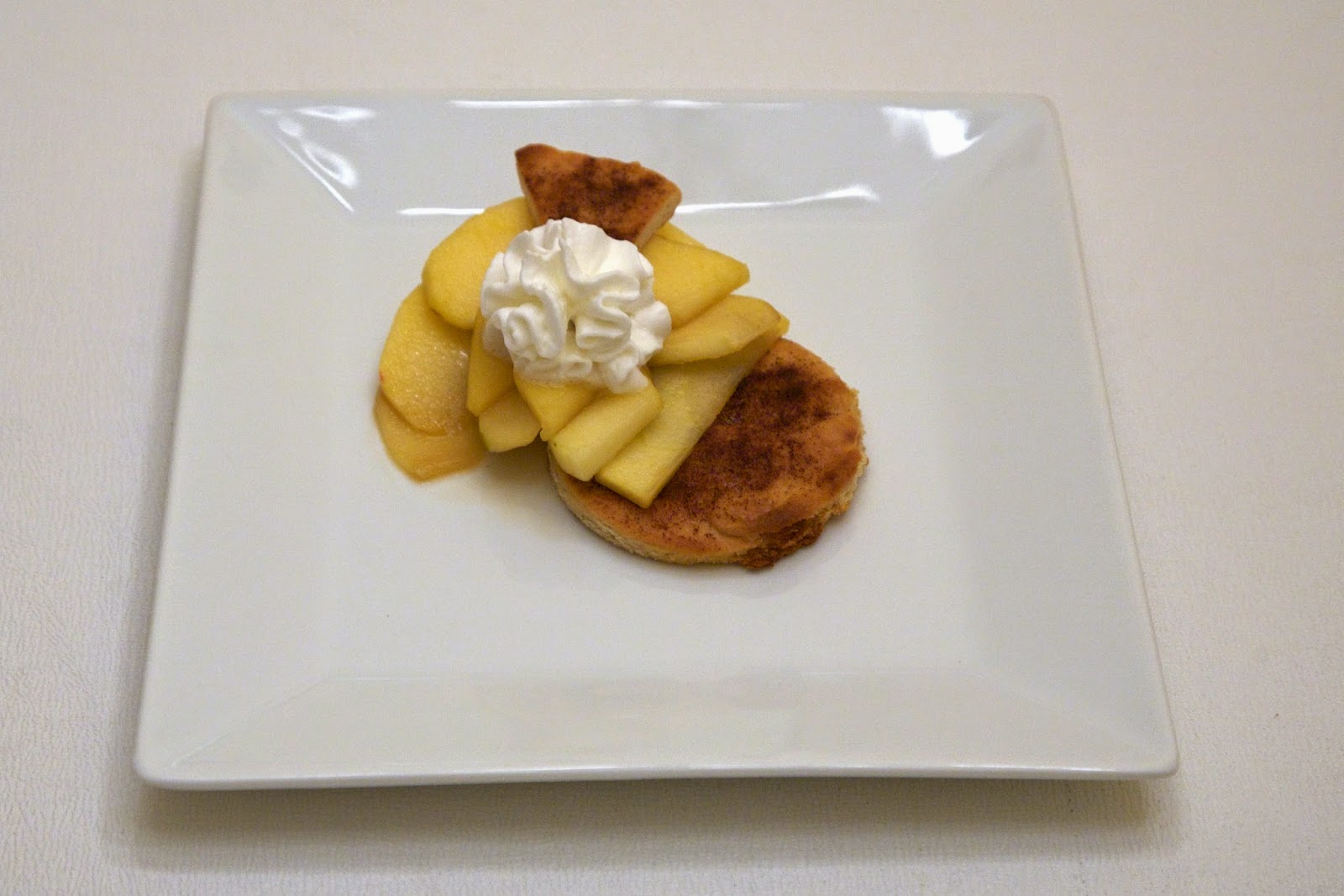 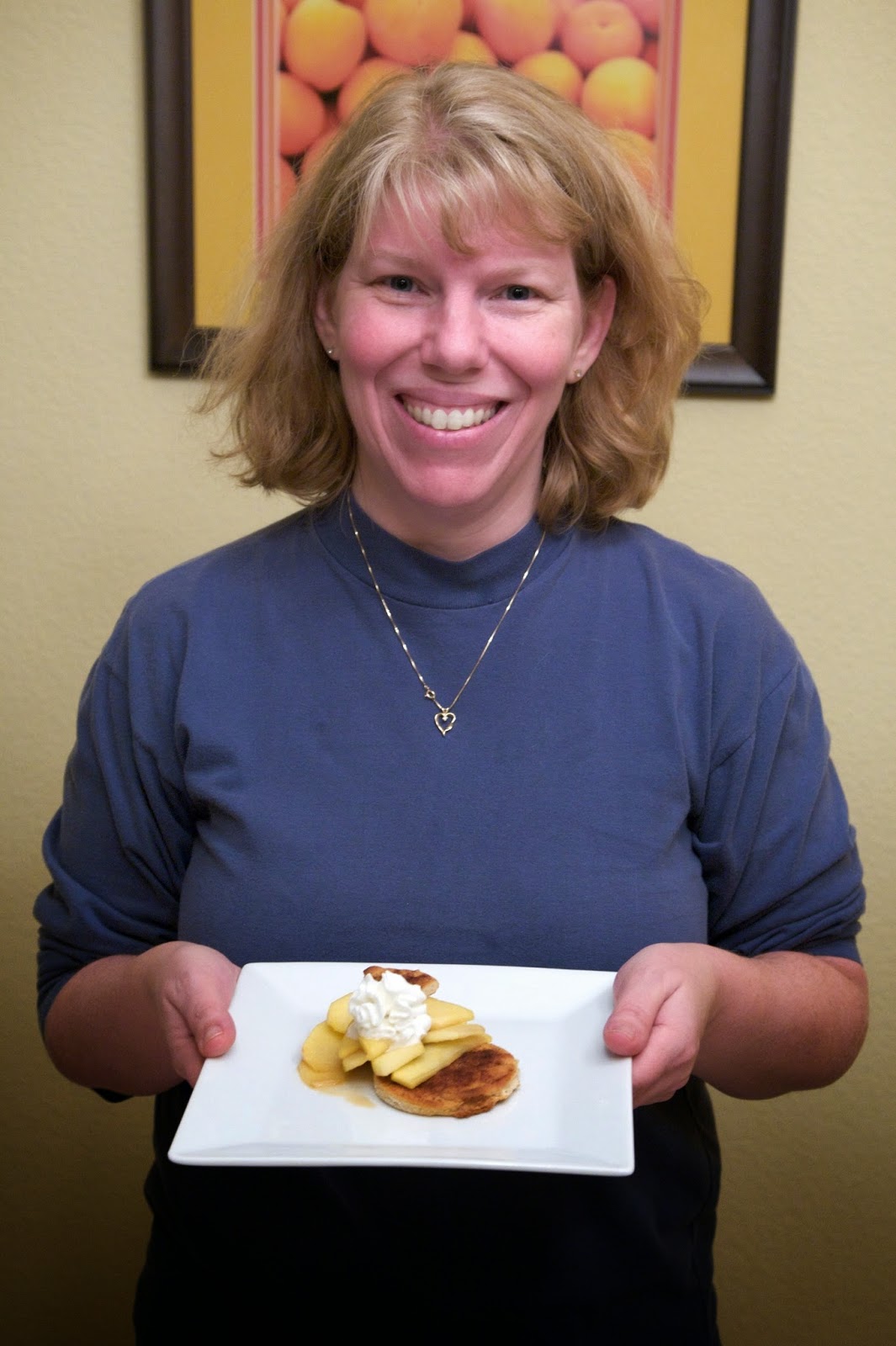 It too was REALLY good. At least the apples and the sauce were. The naan was too thick to function as a substitute for a toile or puff pastry and too toasted to properly soak up the sauce. We all agreed that it tasted excellent but that the texture was off with the naan. Trevor gave me 3 7/8 and Steve gave me a 3.

Congratulations to Steve, official winner of the deRosier Naan Challenge of 2014! To celebrate his victory, we made a donation to our local Food Bank. That way, everyone is a winner.
Email ThisBlogThis!Share to TwitterShare to FacebookShare to Pinterest
Labels: Cooking Competition, Recipes