New-to-me food #16 was actually a gift to Steve and me from his sister's travels. It was a metal can, the size and shape of a tuna can. Unlike tuna, whatever was inside sloshed like a liquid. The label was entirely in German. I recognize about 20 words in German, including birne (pear). It turned out that the can held pear liqueur.

We opened it on the first night of our Easter trip to Bear Valley. The liquid was a beautiful gold color and there was a single cube of pear in the can. It smelled strongly of pear. 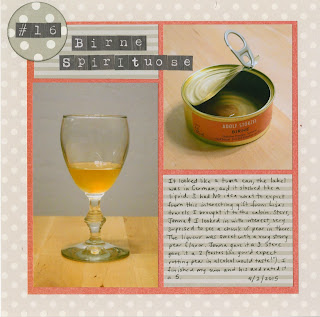 I kinda liked it and gave it a 5. The flavor was strong and tasty, but the chunk of pear and floating bits were off-putting. I think if we'd had cheesecloth or something similar with us to strain out the bits, I would have liked it even more. Jonna didn't like it nearly as much as I did, giving it a 3. Steve gave it a 2 and rejected it after drinking half. I finished his. Maybe I should have given it a 6...
Posted by Cindy deRosier at 5:00 AM