I like to cook and bake. For a long time, I would have said that my specialty was breadbaking (note to self to blog that portion of Memory Lane, which I still haven't done), but now I'd say my specialty is combining random leftovers from the fridge to make a quick and tasty dinner. I do that pretty often.

I had some leftover pie crust, but not enough for a 2-crust pot pie or similar entree, so I decided to make a calzone. They're usually made with pizza dough, not pie crust, but there's no reason it wouldn't be delicious, right? Right. I spread some leftover spaghetti sauce on the pie crust, dug around in the refrigerator and freezer and came up with a single slice of cooked bacon, one slice of ham, a bit of leftover pineapple. I diced everything and put it on the half of the pie crust, along with shredded mozarella, shredded parmesan, and some basil from our garden. 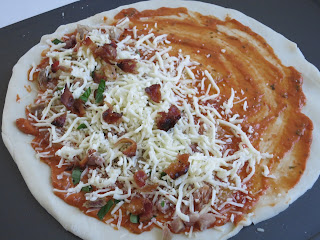 I moistened the edges of the dough, folded the empty side over the full size, and crimped the edges. I cut three slits in the top, then baked it at 425° for about 20 minutes. 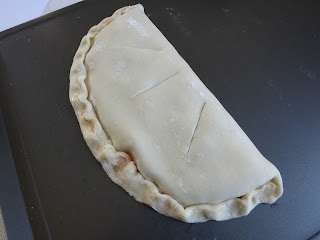 When the calzone is lightly browned, remove it from the oven and let it cool for a few minutes. Slice along the slits and serve! 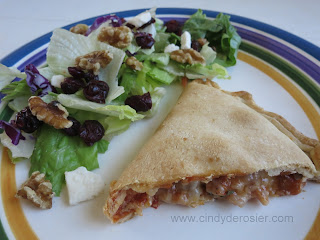 The verdict? Delicious!
Email ThisBlogThis!Share to TwitterShare to FacebookShare to Pinterest
Labels: Recipes