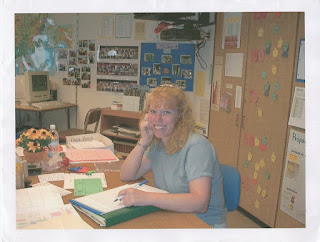 Photos like this show me how incredibly valuable scrapbooking is to me. Having photos is great, but it's the journaling that goes along with them that brings meaning. I can look at this photo and know that it is me, that I'm in Room B-4 at Glen Cove Elementary, and that I was the teacher of either a 4/5 combo or 5th grade class. I recognize almost everything in the picture and know how I used it and when I got it. If Trevor had found this photo after I was gone, he'd probably recognize me, but that might be it. He could guess that it might be my classroom, but he wouldn't know when or where. The next generation probably wouldn't even recognize me, let alone anything else about it. They may not even care, but if just one person appreciates that I've taken the time to record the details of our life in my scrapbooks, then that's more than enough reward for me.
Email ThisBlogThis!Share to TwitterShare to FacebookShare to Pinterest
Labels: My Teaching Days