It's pretty cool when the Little Passports package comes and not only do you recognize the location on the front cover... 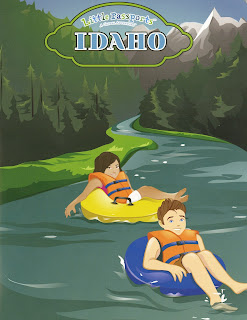 ... but you've been there, doing exactly the same thing! 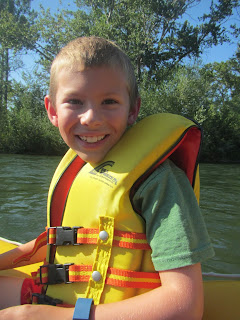 That happened more than once as we worked our way through the Idaho State Journal. We'd visited the almost all of the encoded places listed in the Boise Attractions page. There's a map coordinates activity about the World Center for Birds of Prey - a highlight of our visit to Idaho. Trevor whipped through the math activity to discover Idaho's State Tree, which we'd seen in person at the Idaho Botanical Garden, among other places!

But there were plenty of other activity pages in the State Journal that introduced us to something new about Idaho. It was very interesting learning about the ecoregions of Nez Perce National Historic Park. And the City of Rocks sounds like such a neat place to visit. Maybe someday.

We ate a lot of potato-related foods when we were in Idaho, so it was fun to make Potato Chip Cookies. Check out our finished cookies. Yum! 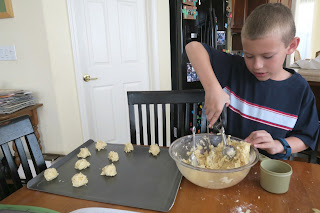 There were two science experiments in the Idaho State Journal instead of the usual one craft and one experiment. The first was inspired by Craters of the Moon National Monument. I've done a fair number of oil/water experiments, but I've never added a fizzing antacid tablet. The results were really cool and mimic the gas-filled molten rock beneath volcanoes. 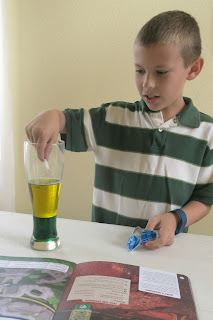 The other science experiment was the classic one where you use a potato to power a light bulb. I've done this successfully before and supervised as Trevor peeled a potato... 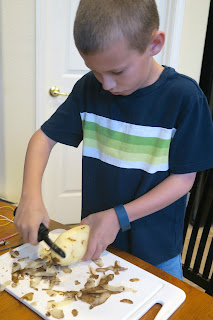 ... and created a circuit with copper wire, a nail, and a lightbulb. 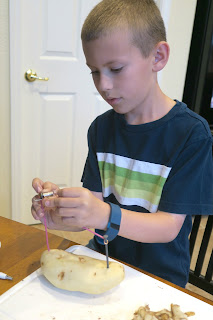 It didn't work. Hmm. The directions suggested using multiple potatoes if the current was weak, so we added a potato and then another. I was stumped. Steve and his multimeter to the rescue! 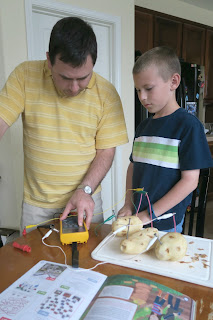 Steve and Trevor tested the lightbulb to be sure it was ok (yes) and then measured the current flowing through the potatoes. They did a bunch of tinkering, extending the activity much farther than the folks at Little Passports ever expected! 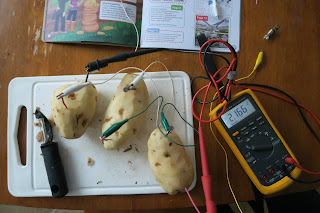 We had a great time exploring Idaho through Little Passports. On to our next state!