It's a big deal for most Cub Scouts to make the transition from the blue uniform the younger kids wear to the tan uniform of the older Scouts. This can happen any time during the 2-year Webelos program. Trevor switched shirts at the end of his fourth grade year, at the midpoint of his time in Webelos. 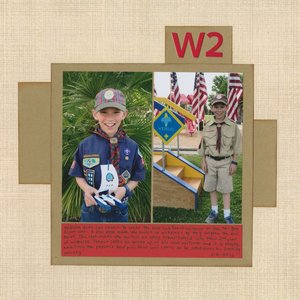 W2 - Tan Shirt (affiliate link)
The two photos were taken about two weeks apart. You can see that Trevor is wearing the same Webelos hat and neckerchief in both photos. We made the decision not to transfer his many patches and other awards off the blue uniform so that he could keep it as a reminder of all he accomplished as a Cub Scout.
Email ThisBlogThis!Share to TwitterShare to FacebookShare to Pinterest
Labels: Cub Scouts, Layouts