We had a lot of things we wanted to do on our last day in Omaha. Our top priority was walking across Bob (aka the Bob Kerrey Pedestrian Bridge). 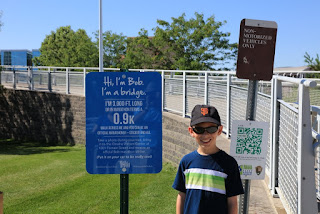 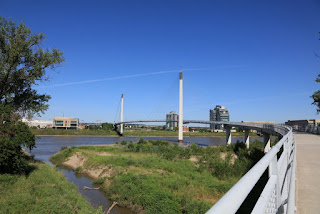 There's something very satisfying about walking from one state to another and back again. 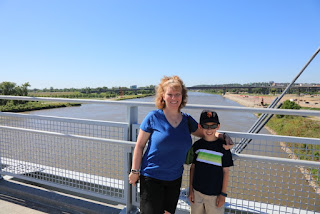 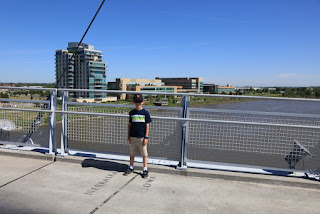 At the base of Bob (on the Nebraska side) is the Lewis and Clark Historic Trail Headquarters and Visitor Center. Trevor earned another Junior Ranger badge. 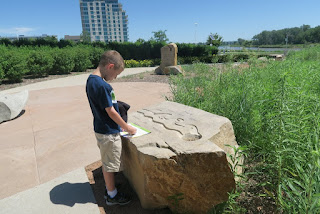 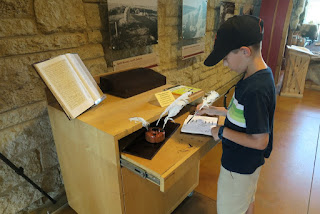 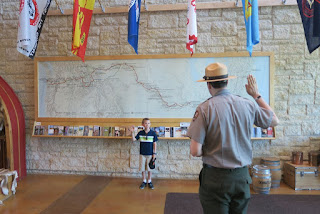 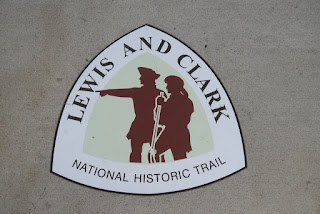 Our next destination was Hot Shops Art Center (motto: Home of All that is Molten). The facility includes four anchor Hot Shops (glass, metal sculpture, pottery, and blacksmithing), 58 studios for artists of all sorts, and three art galleries. The public is welcome to visit any of the spaces where the door is open. 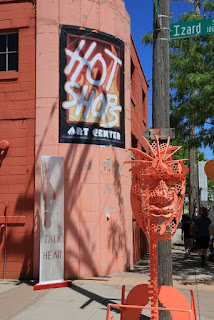 We found about half the spaces open with artists at work. It was great to be able to watch their work and ask questions. 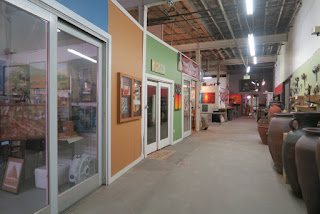 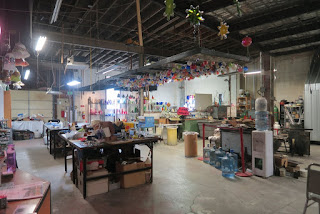 Our favorite space was Crystal Forge. The artwork was beautiful. 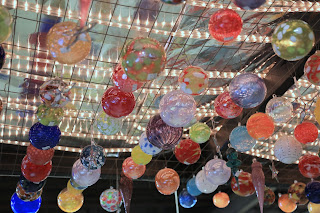 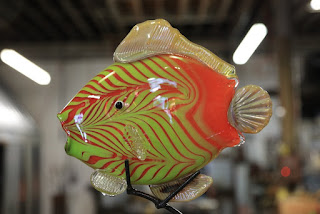 We headed back to the Joslyn (HOW IS THIS FREE?!) to enjoy the parts we'd rushed through before. I had great fun in the exploration area. They had a dress form and a ton of fabrics and accessories for people to drape and design. I sketched three different designs as people were making them, which was very difficult... but so much fun! 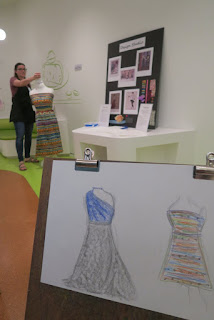 Our next stop was at Boys Town, a village for at-risk children that has been operating since 1936. 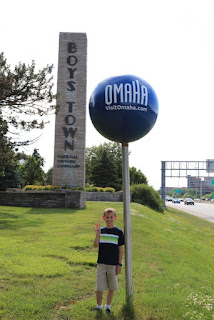 We had about 90 minutes to explore before the buildings closed. We thought that would be enough, but it wasn't. The Hall of History was absolutely outstanding. It was so uplifting and inspirational. We could have spent hours there, watching all the footage and enjoying the artifacts. 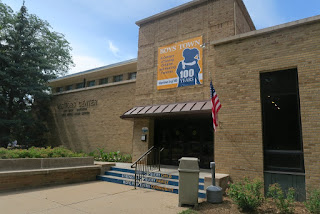 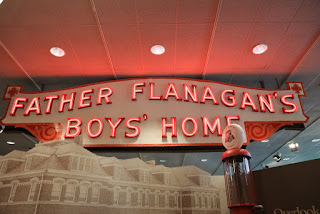 But there was no way we were going to pass up the Leon Myers Stamp Center... 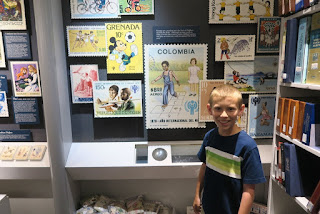 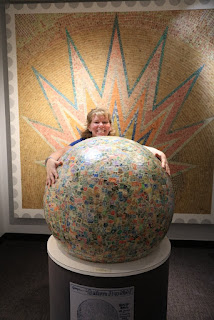 We said a reluctant goodbye to Boys Town and headed to Omaha Tap House. That was the meeting location for the 'Bite of Omaha' tour, conducted by Omaha Culinary Tours. 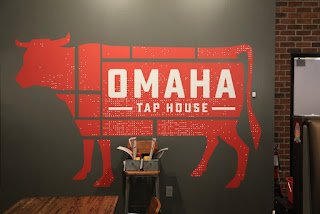 We had a bus tour, guided by the fabulous LeAnn, that stopped at four different Omaha locations. Our group included 15 adults from the Omaha area... plus Steve, me, and Trevor. We'd expected that Trevor would likely be the only child on the tour, but we hadn't expected that we'd be the only tourists! When we've done culinary tours in other cities, the participants have been tourists 99% of the time. But in this case, our fellow foodies were locals who wanted to learn more about the Omaha food scene and get introduced to new-to-them restaurants. I love that!

Before going any farther, I need to let you know that I was given a free ticket to attend. However, I paid full price ($60 each) for Steve and Trevor. And the tour was totally worth it. We learned a lot about Omaha and ate copious amounts of food at three restaurants. At the fourth stop (which was a wine and spirits shop, not a restaurant) we had bourbon and wine tastings... which brings me to my one and only complaint about this tour. While it was an interesting stop, it was my least favorite of the four by far. I was expecting food. Obviously, Trevor could not legally taste any alcohol, so I feel like he should not have been charged the same amount as someone who could participate at all four stops. I imagine there are others who, for a variety of reasons, might not have chosen this tour knowing that one of the four stops is alcohol. We did not have a dessert stop - that would have been a much better choice, in my opinion. 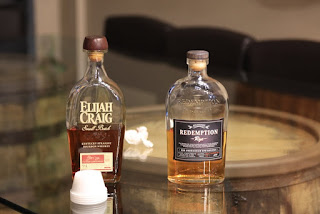 So what did we eat? At Omaha Tap House, we had huge plates of appetizers (onion rings, fried cheese curds, fried pickles, and a few others - all amazing) and four different sliders. I would return for any or all. The food was really, really good. 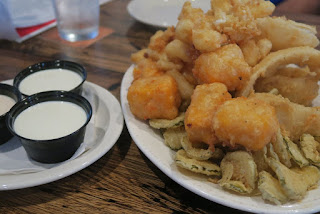 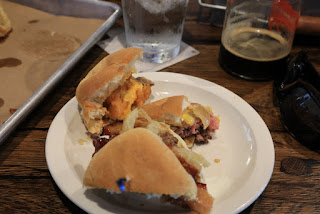 At Pizzeria Davlo, we had three different pizzas, Chicago-style and thin crust. Delicious! 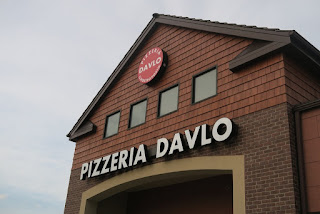 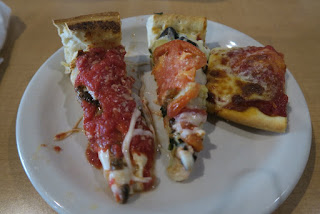 And at Railcar Modern American Kitchen we had pork belly tostadas and short rib flatbread. Fabulous! 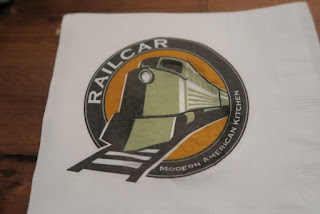 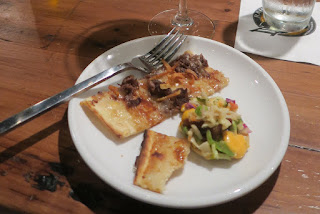 Obviously, I recommend Omaha Culinary Tours for locals and tourists! But consider asking ahead of time where the stops will be if you have any food (or drink) restrictions, just to be sure you don't end up like Trevor at a bourbon tasting. Despite that stop and the fact that he was the only child, he loved the tour and told me he wants to take a different culinary tour by the same company the next time we're in Omaha.

As you can tell, we had a fantastic trip to Nebraska. Before the trip, I had no idea that the Omaha area would be so wonderful. I would vacation there again in a heartbeat. We could have easily spent another week and still not seen and done everything interesting on my list. I strongly encourage you to check out this undiscovered, family-friendly, inexpensive, all-around-awesome area for yourself!
Email ThisBlogThis!Share to TwitterShare to FacebookShare to Pinterest
Labels: Nebraska, US Travel