Steve and I both love musicals. We've seen a ton together, ranging from professional touring companies to community theater to films. One of my goals for the 40-4-Steve project was to see one (or more) new-to-us musicals. Mission accomplished! We saw a total of six in 2016 that neither of us had seen before. 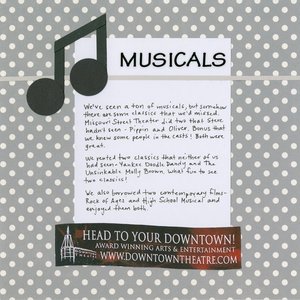 
Once again, I struggled with how to scrap this. Not only did I not have photos, but we saw six musicals in different places and on different dates. I thought about just scrapping the first one, but rejected that idea. I thought about printing out the Playbill logos for each, but that seemed weird and/or impossible for the ones we watched on film. I ended up cutting out the banner from a program from our local community theater where we have seen the majority of the musicals we've seen recently. The page is plain, but it conveys the information and is a rest for the eyes in an album with a lot going on.
Email ThisBlogThis!Share to TwitterShare to FacebookShare to Pinterest
Labels: 40-4-Steve, Layouts