Our next virtual adventure through Little Passports took us to West Virginia. We've never been there and had a great time learning more about it!

The first activity was about Bridge Day. On the 3rd Saturday of October, the New River Gorge Bridge closes to cars to allow people to rappel or parachute from the bridge, or launch themselves as human catapults into the river! Good grief. We were fascinated reading about it, but Trevor and I are about as risk-averse as people can be and have no interest in trying any Bridge Day activities!


West Virginia is the home of Marble King, which makes more than a million marbles a day. Trevor dug out his huge collection of marbles so that we could make some neat marble art, inspired by West Virginia. Trevor was only 5 the last time we did marble art. Tomorrow I'll show you how we turned our art into birthday cards. 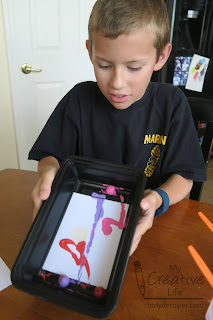 We were intrigued by the West Virginia cooking project, Pepperoni Rolls, and decided to have them for dinner. Here's Trevor kneading the dough. 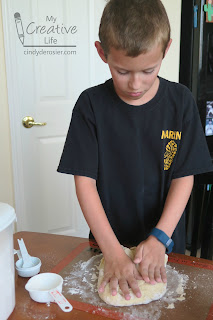 Next was a challenging maze that taught about summer activities in the Appalachians. (Trevor LOVES mazes.) The pages about winter in the Appalachians included a word search and a cool science experiment involving flour. The flour was already out from making Pepperoni Rolls, so that was perfect! We filled a tray with flour to simulate snow. Little Passports suggested using clay to make a boot and cardboard to make a snowshoe, but we improvised with a transformer character and a mini paddle. First, Trevor dropped the transformer into the 'snow' from a standard height. Then he taped his feet to the paddle and dropped it from the same height. He repeated the steps several times. Trevor was able to see how snowshoes' larger surface area distributes the impact of a person's weight, preventing them from sinking deep into the snow. Try it yourself! 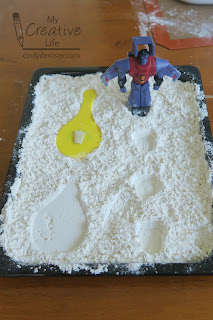 We played with the flour for a good 30 minutes, trying all sorts of variations and designing our own experiments. It was a lot of fun and a great way to pass the time while we were waiting for our dough to finish rising. 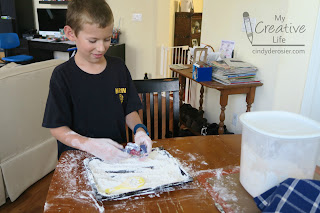 Trevor hates for his hands to be dirty, but he was all smiles this time. 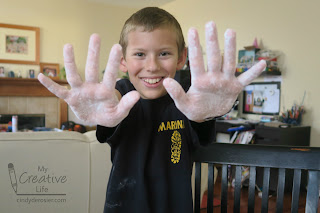 We cleaned up the flour just in time to finish our Pepperoni Rolls. We made five large rolls with pepperoni and three with cheese instead. We curved the cheese ones into C's so we could tell them apart. Both were delicious! 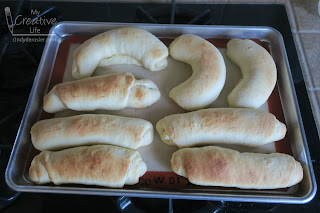 Another great adventure with Little Passports!