A Gift of Money: The Euro Gyro

I’ve been doing money gifts for my nephew, Timothy, twice a year for six years. I enjoy the challenge of coming up with clever ways of giving him money, but there is some pressure when gift giving time is near and I still haven’t thought of something unique. Planning a money gift for Timothy's birthday at the end of October isn’t too bad, because I have 10 months to think of something. But designing his Christmas gift just 8 weeks later always proves more stressful. And now that he lives out of state (Idaho), it’s way more complicated than before. Last year, he came to California for Christmas, so I was able to give him an elaborately wrapped money gift (in this case, Air Force One), which he dismantled and flew home with just the cash. This year, I had to design a gift that could go into my suitcase and through airport security before it was opened (alas, no more Money Trees).

In a few months, my parents are taking Timothy’s family and our family on a European cruise to celebrate Timothy’s high school graduation. Naturally I wanted to give him euros for his Christmas gift. But I couldn’t think of a clever way to package them. I was brainstorming at the dinner table and Trevor thought I was talking about gyros instead of euros. Once we realized what the other person was talking about, it was obvious that I’d need to invent the euro gyro. Affiliate links below. 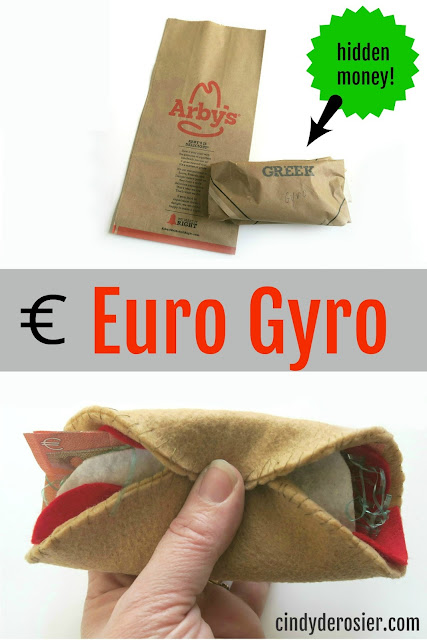 Procure euros. I went to my bank, which does not charge fees to buy foreign currency. They keep euros on hand, so I did not have to order ahead or make an appointment. Quick and easy.

Procure a gyro wrapper and bag. I wanted my gift to look like I’d literally bought Timothy a gyro for Christmas, so I did a little research and learned that Arby’s sells gyros. So Steve, Trevor, and I had dinner at Arby’s in early December (turns out their gyros are quite delicious) so that I could ask for a clean wrapper and a bag. Also quick and easy. (As an aside, I was looking on Amazon just now to see if I could link to something Arby's related in my materials list and found this fabulous gem. It took me a long time to realize they were referring to a golf driver and not a roast beef delivery person.)

Cut two pieces of tan felt into a circle the size of a pita. Use a quick whipstitch to connect them, leaving a small opening for stuffing. 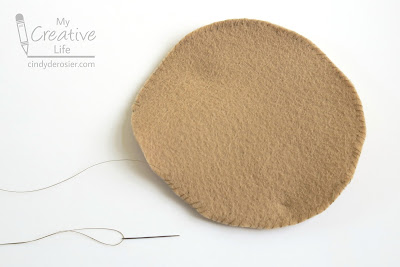 Add a little bit of Polyfil at a time until the pita has the appropriate puffiness. Sew the opening closed.

Cut a couple of red felt tomato slices and some white tzatsiki. Fold the euros in half lengthwise and add some Easter grass. 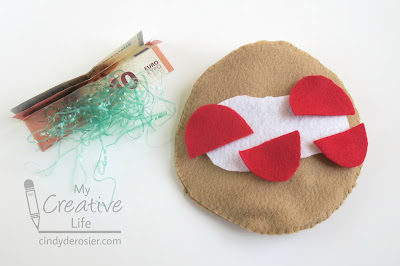 Layer the euros (which represent the meat in a gyro) with tomato, tzatsiki, and lettuce inside the pita. 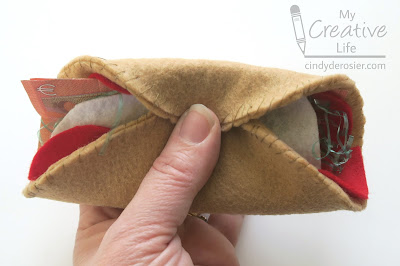 Fold it over and wrap it with the gyro wrapper. Alternatively, you can wrap it in foil. 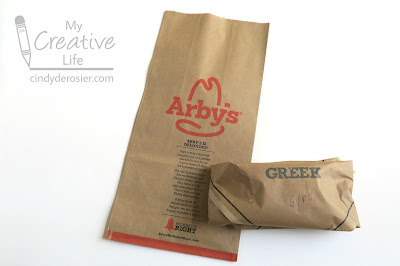 Muss up the bag a bit, then put the euro gyro inside. Your gift is ready! 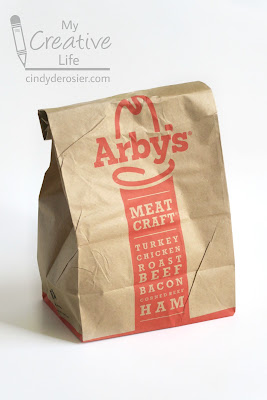 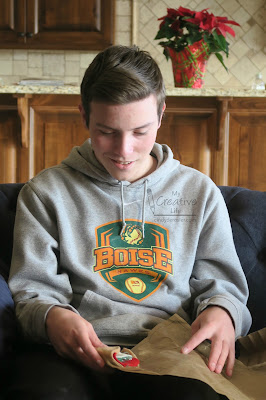 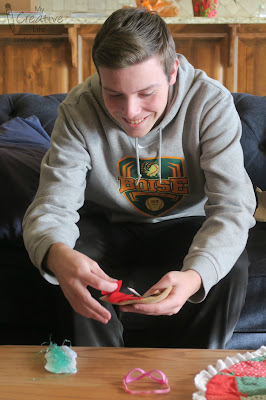 I’ve done foreign currency for Timothy twice before: first, when he took his Make-a-Wish trip to Australia, then again when I turned colorful foreign bills into flowers. It's fun to mix things up a bit.

Any ideas for his birthday? I only have 10 more months to come up with a clever idea!
Email ThisBlogThis!Share to TwitterShare to FacebookShare to Pinterest
Labels: Crafts for Kids, felt, money gift, sewing, Timothy