This cactus name art started with a random question: Could I stand magnetic letters on their end and do something artistic with the shadows they create? Yes, but it took me awhile to figure out what to do and how to do it! Affiliate links below. 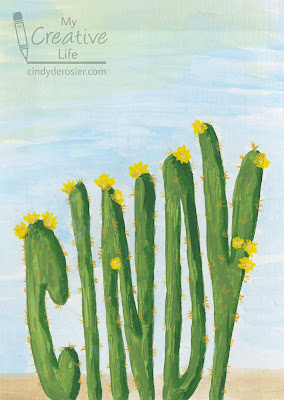 I had no idea where I was heading with this project when I started. I certainly didn't have cacti in mind as spelled out my name in magnetic letters. and tried to balance them on a piece of chipboard (painted black). I quickly discovered that some letters would balance and others wouldn't. I put a Glue Dot on the bottom of each letter (easily removed, so the letters could go back on the fridge when I was done), which worked like a charm. With my letters secured to the black chipboard, I put second piece of chipboard (painted white) next to it and set them both on the floor in front of a sunny window. I was hoping to cast long shadows onto the white paper, which I could then trace. 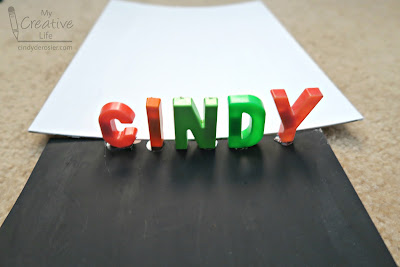 After rotating my artwork and waiting for later in the afternoon so the shadows would be longer, I still wasn't getting what I wanted. Time for artificial light, in the form of a flashlight. There are the long shadows I wanted! 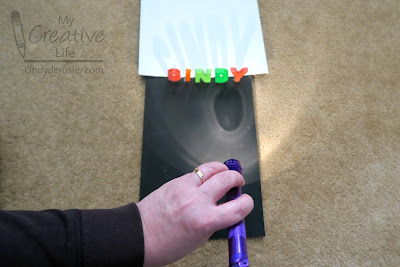 It took a bit of coordination to hold the flashlight steady and trace the shadows at the same time (without casting additional shadows that would cover the ones I was trying to trace). This would work much better with a partner.

When I looked at my finished shadows, I saw cacti. I painted them green (using my favorite acrylic paints, of course)... 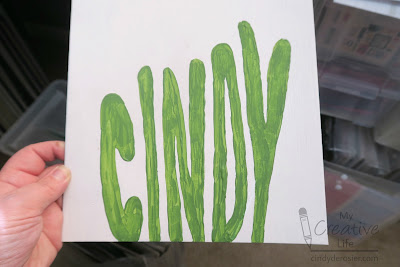 ... then added darker green shadows. When that was dry, I watered down some blue to make the sky and a light brown to make the sand. When those were dry, I added flowers, spines, and a wash of yellow in the sky.

This was a really fun experiment. I'm definitely going to play with shadows again and see what artwork it inspires.
Email ThisBlogThis!Share to TwitterShare to FacebookShare to Pinterest
Labels: Arizona, cactus, Crafts for Kids, name art, paint, Plaid