You guys, I am ridiculously pleased with myself because this pig turned out even better than I'd planned. It's inspired by friend Doreen. Doreen has a pet pig (Hamlet) and she is constantly showing off yummy desserts on her blog.

My pig is made of Rice Krispie Treats and is sitting in chocolate mousse. Hamlet is black, not pink, and is a house pig, so I don't think he does much mud-wallowing. So I took some artistic license with my creation. 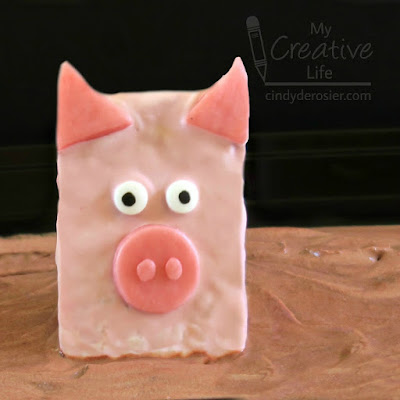 But I didn't forget the curly tail. 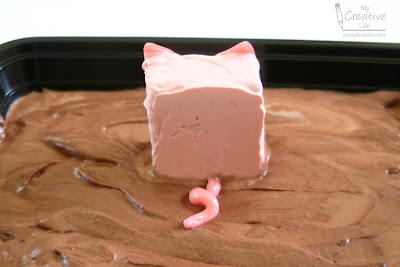 Read on to learn how I made it. Once I figured everything out, it was actually quite easy. (And delicious.) Affiliate links below.

Put 1/2 c. cream into a bowl and gently warm it (I did 30 seconds in the microwave). Use a serrated knife to chop the chocolate. Put half of the chocolate into the warm cream and let it sit for about two minutes, then whisk it together. Add the rest of the chopped chocolate and whisk until it is smooth. (Congrats - you've made ganache!)

Pour the remaining 1/2 c. cream into a large bowl and whip it to medium peaks. Gently fold half of the cream into the chocolate mixture. Fold in the rest of the cream. (Congrats - you've made mousse!) Gently spread the mousse into a shallow container and put it in the refrigerator to set up.

Unwrap a pink Starburst and roll it out on a clean surface. 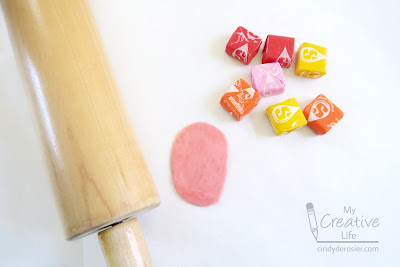 Cut out a snout and two ears. I used a knife for the ears and an ancient cookie cutter for the snout (but I totally want this set. Imagine the possibilities!!) Don't eat the Starburst scraps (yet). First, roll a snake then twist it into a tail. Roll two itty bitty balls, then flatten them and put them on the snout to make the nostrils. Now you can eat the scraps. 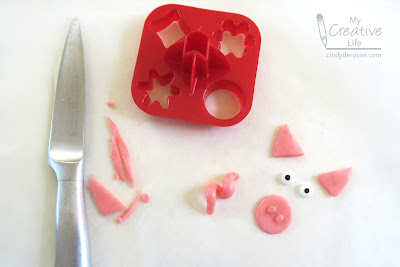 Now it's time to coat the rice krispie treat to make it pink. I melted 8 white Candy Melts with 1 red Candy Melt and it was the perfect amount for a single pig. (I did 45 seconds at 50% power in a glass container and then stirred, but every microwave is different).

The easiest way to get good Candy Melt coverage without too much waste or too much mess is to insert a stick into the short end of the rectangular rice krispie treat and spread the melted candy on using a knife. When it is covered on all sides, set it down on a piece of parchment paper. 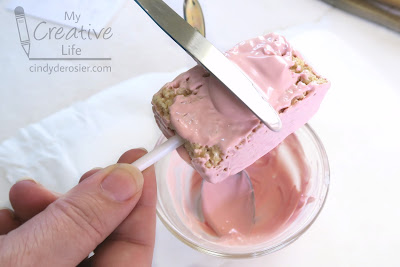 Let the candy set up for a minute or two, then place the snout, eyes, and ears in position. Let the candy firm up completely, either at room temperature or in the refrigerator. (Don't put it in the freezer, as it turns out that the condensation makes the eyeballs run when it comes to room temp.) Peel the pig up from the parchment paper. It would make a fun treat just like this, but the mud/mousse makes it more awesome. 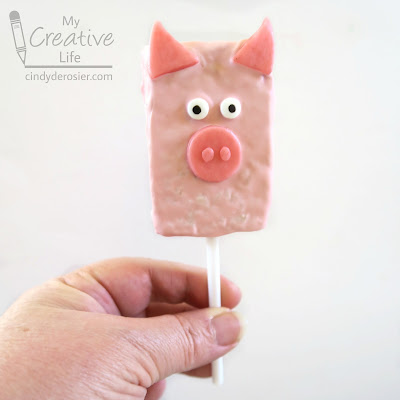 Remove the mousse from the refrigerator. It should have set up considerably so that it holds the pig upright without slumping. (If not, return the mousse to the fridge sans pig and try again later.) 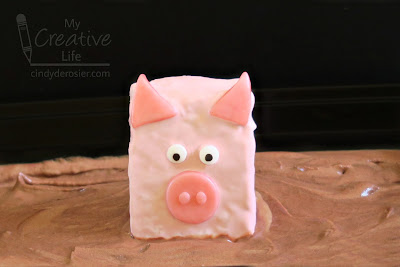 Finally, nestle the pig's tail behind the pig into the mousse.

Adorable, if I do say so myself! And sooooo yummy!
Email ThisBlogThis!Share to TwitterShare to FacebookShare to Pinterest
Labels: candy melts, chocolate, Crafts for Kids, edible, mousse, pig, rice krispie treat, starburst