Trevor joined his school's Robotics Club when it began a few months into 7th grade. The fledgling club met after school twice a week for an hour. Trevor enjoyed it and learned a lot. When it was time to pick electives for 8th grade, the Robotics Club advisor asked the 7th graders if they would like for Robotics to become their official elective the following year. They would work independently in the back of the room while she taught a STEAM class to younger students. Trevor and seven other rising 8th graders were interested.

The eight kids in the Robotics elective divided into two four-member teams to design robots based on the 2019-2020 VEX challenge, Tower Takeover. However, their building materials were very limited, their computer equipment was old and kept crashing, and it wasn't until November that they received a single sample of the block for the Tower Takeover challenge to share between the two teams. They continued to tinker, with hopes of entering a middle school competition.

After some very frustrating issues with the district, we received word in mid-January that their advisor had finally successfully registered Trevor's team (who named themselves The Whales "because we like whales") for their first competition..... on February 1. The team of neophytes had only a single sample block, no towers, no testing arena, and only two weeks to get ready to compete. They worked hard and were so excited.

We showed up to the competition and saw that many of the teams had matching shirts covered with logos from corporate sponsors. That might have discouraged some kids, but The Whales ignored the other teams and used every second before the competition to practice and improve. Their first match came very early in the competition. I can't tell you how exciting it was when they scored their first points! 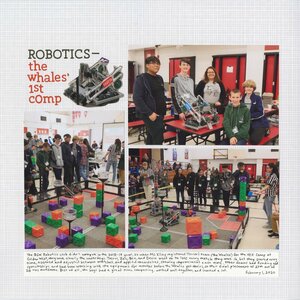 
The Whales went on to lose that first match, as well as the rest of their matches that day. But after each match, they tinkered and practiced, and showed significant improvement over the course of the day. They watched and learned from their competitors. They finished the competition 27th out of 28 teams, thrilled with how well they had done in what was not only their first competition, but the first for their school.