Each year around Thanksgiving, I begin impatiently awaiting the announcement of the Pantone Color of the Year. Except this year. The COTY hasn't even been on my radar. For the first time in 8 years, I haven't been stalking Pantone's site waiting for the big reveal. Other things have kept me busy and drawn my attention elsewhere. My routines are off and my sense of time is all screwed up. In past years, December means prepping for an in-person trade show in January (where I scope out the Color of the Year). This year Creativation+ will be virtual and was moved to March, so I'm not in trend-spotting mode yet.
Traditionally, Pantone selects the Color of the Year from its Spring/Summer palette, announced in the fall. Here are the contenders:

I love Marigold, Cerulean, Illuminating, French Blue, and Amethyst Orchid. I kind of like Mint and Raspberry Sorbet. I do not like Rust, Green Ash, or Burnt Coral. Appropriately, I'm neutral on the neutrals.
You might remember how annoyed I was when Pantone chose two colors for 2016. Well, guess what? I'm annoyed again. 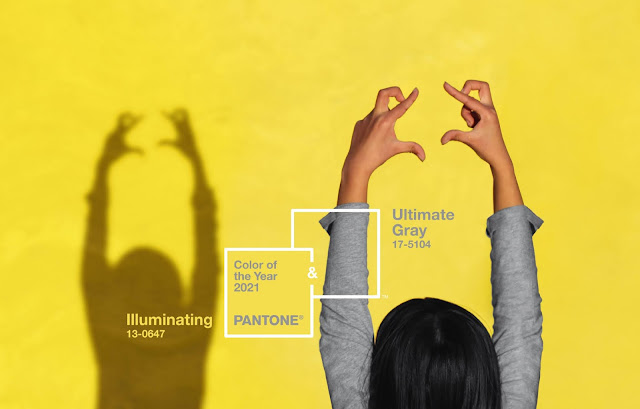 Personally, I think the color used in the background of the quote would make an outstanding 2021 COTY. As would either Illuminating or Ultimate Gray or literally any other single color. Emphasis on single.
As always, I'll be on the lookout for the C(s)OTY. I don't expect them to have much of an impact in scrapbooking or in the general craft market, but perhaps I'll be proven wrong. It will be interesting to see if the color combination appears more often than either color on its own in 2021.
Posted by Cindy deRosier at 5:00 AM
Email ThisBlogThis!Share to TwitterShare to FacebookShare to Pinterest
Labels: Pantone