Trevor and I both love pens, so when I see a set I want that I know he'd like too, I buy it as a gift for him ("To Trevor and Mom, From Mom"). Such was the case for Crayola Sweet and Stinky Scented Markers (affiliate link here and throughout the post). 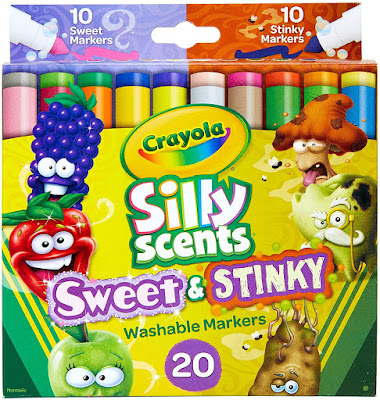 I fell in love with Mr. Sketch markers when I was a kid and I introduced them to my own kid at a young age, so I was eager to see how these Crayola markers compare. I was careful not to read the box or even do more than glance at it before trying them for the first time so that I could test the scents with an unbiased nose.
When I opened the outer box, I discovered two inner boxes- one stinky and one sweet. 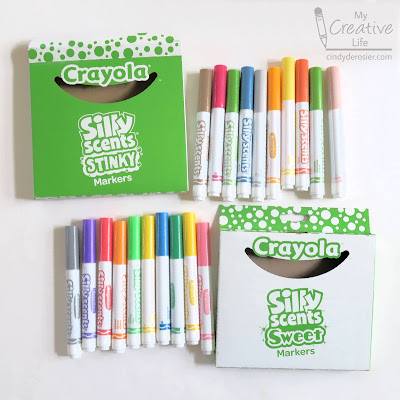 I discarded the inner boxes, mixed up the pens, then organized them by color. I made a chart, then tested them one by one. 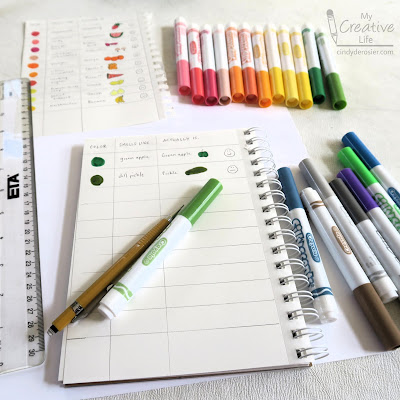 First up, a pure red that smelled just like strawberries. Delightful! Then a pink that smelled like watermelon candy. Not my favorite, but fine. The fuschia color smelled like overripe fruit. Not BAD, per se, but off just a bit. And then, I removed the cap on a pale peach marker and was met with an overwhelmingly bad smell. I couldn't place the smell - it was medicinal and rotten and horrifying - but eventually labeled it "awful diaper rash ointment." I was VERY surprised to learn it was supposed to be mushroom.
Fortunately, what turned out to be my very favorite scent in the whole box was next - orange. I followed that up with what I thought was "rotten lunchmeat" but turned out to be Cheese (really?), then "smoking sugar" (Pizza), "lemon soap" (Lemon), "garlic + exhaust" (Onion), and "marshmallow" (Banana). 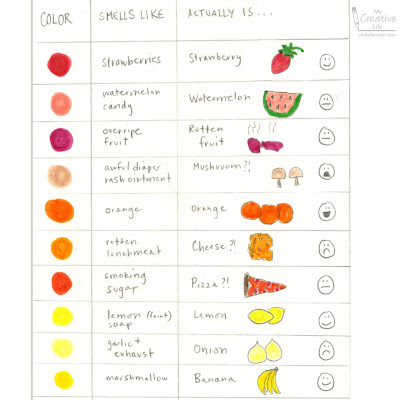 The mushroom was the only scent in that bunch that was truly horrifying. Not only that, it performed the worst as a pen. As you can see, most of the colors above are rich and uniform. The mushroom marker didn't color as nicely as the rest.
Moving on to the cool shades. I started off on a roll, correctly guessing both Green Apple and Pickle. However, what I thought was "spoiling chives" turned out to be Old Rotten Tooth. Never would have guessed that! It was unpleasant, but not awful. I guessed "lime soap" for lime, then got three in a row - Blueberry, Smoke, and Garlic. I guessed "hair conditioner" for Coconut.
I was not prepared for the next marker. It ranks among the worst things I've ever smelled in my life. "How bad could it be?" you might be thinking. Bad enough that my guess was "dirt + death = grave." When I rotated the pen to read what it was, I was fully expecting it to be corpse or gangrene or something. Nope. Dirty Potatoes.
Let me make something clear: dirty potatoes do not smell like this. We grow potatoes, which I harvest from dirt. During my biweekly shift at the Food Bank, I divide tons (literally) of fresh-from-the-dirt potatoes into portions suitable for families. I know dirty potatoes. They smell nothing like that pen.
I ended on a sweet note, as the final pen was Grape. Phew! 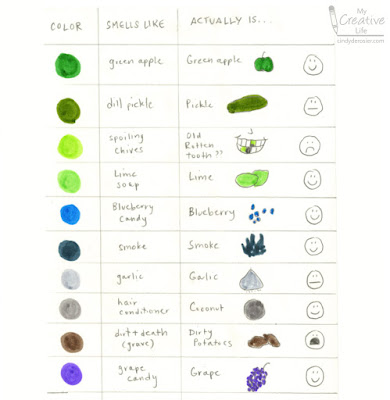 Overall, I'm very happy with our new set of markers. Other than the Mushroom pen, the quality is what I expect from Crayola. I will never willingly open Mushroom or Dirty Potatoes again, but I'll be holding onto them solely to make people smell them once we're back to having visitors in our house. While I was surprised there isn't a black marker in the set, I appreciate having three different gray shades, which is quite unusual.
I highly recommend getting a set of Crayola Sweet and Stinky Scented Markers for the child (or pen-loving adult) in your life!
Email ThisBlogThis!Share to TwitterShare to FacebookShare to Pinterest
Labels: Crayola, Product Review