There are a lot of decisions to make when planning an Eagle Scout Court of Honor, but the color scheme isn't one of them. They are always red, white, and blue. These are the colors that appear on the Eagle patch, neckerchief, and medal.
Our troop has two big tubs of supplies for Eagle Courts of Honor that previous Eagle families have donated after their big events. It was wonderful not to have to reinvent the wheel for every element of Trevor's ceremony. These seven blue felt banners, with large patches of each of the Scout ranks, are part of every Troop 482 Eagle Court of Honor. The large battery-operated candles decorated with red, white, and blue ribbon, as well as the smaller tea lights, also belong to the troop. 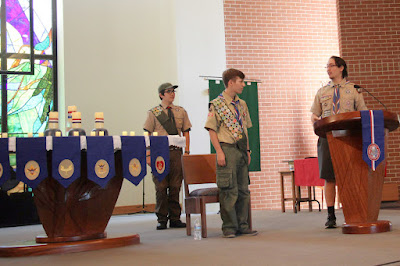 An Eagle mom from years ago made this decorative tablecloth that covered our greeting station. 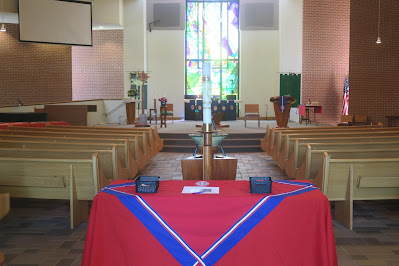 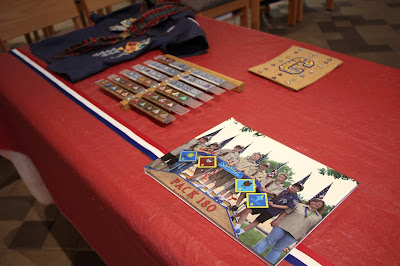 I made my own contribution that future Eagle parents can use, created from two items I found in the troop bins: red, white, and blue artificial flowers, and a huge amount of confetti. Apparently, a lot of people have bought confetti, came to their senses at the last minute and didn't use it at the ceremony, and then tucked it into the tub. This decoupaged flower pot was my way of using some of that confetti in a way that wouldn't require any clean-up. Making it was really easy. Affiliate links below. 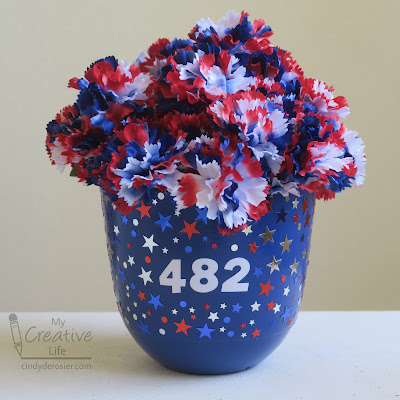 Adhere the numbers to the flower pot, either by sticking them on or by using Mod Podge if they're cardstock. Working with one section of the flower pot at at time, add a coat of Mod Podge, then apply the sequins. Continue working all the way around the pot until the entire area is covered the way you want it. Let the Mod Podge dry completely. Add a second coat of Mod Podge over the entire surface. When that is dry, add a third coat. Finally, arrange the flowers in the pot.
Here's how it looked at the ceremony: 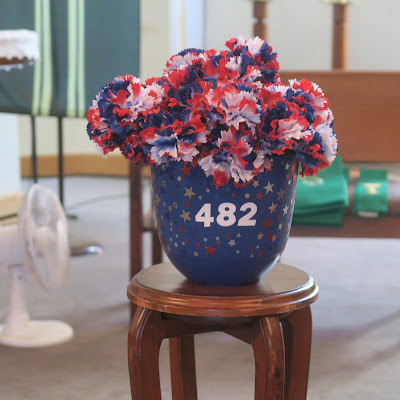 I made another project using Eagle Scout confetti, but that one didn't go into the troop tub. It's for Trevor to keep. I'll show you that tomorrow.
Email ThisBlogThis!Share to TwitterShare to FacebookShare to Pinterest
Labels: Boy Scouts, Eagle Scout, Trevor