I attended my first Eagle Scout Court of Honor in January 2012, about six months before Trevor became a Scout. I knew next to nothing about Scouts, but since the Eagle in question was our nephew Ian, I didn't think twice about bringing a gift. Of course we did! 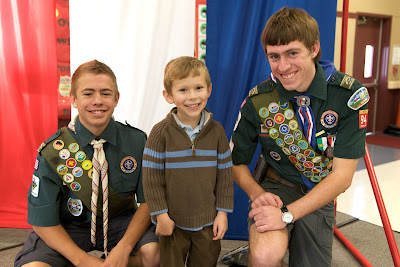 Fast forward five years. Trevor bridged from his Cub Scout pack to his Boy Scout troop. At our second-ever meeting with the troop, one of the moms gave us an invitation to her son's Eagle Court of Honor. We didn't know her or her son, but appreciated the invitation and were eager to attend. I had the vague idea that we should probably bring a gift, but what do you give a literal stranger? Money, obviously. But how much? I asked around and the general consensus was that within our troop, most families gave $20 to an Eagle.
Over the past 5 years, we've attended an average of 3 Eagle Courts of Honor a year, so $20 per Scout is reasonable (particularly when you consider that we often donate toward their Eagle projects). This year, in addition to Trevor's, we've been to the Courts of Honor for eight Eagles and sadly missed another while we were on vacation. (Six of those were earned during COVID and they held a combined delayed ceremony.) I imagine that in a very large troop with multiple Eagles each year, gifts may not be expected from those within the troop. Regardless, a card is always nice.
I have dozens of creative ideas for giving money as a gift, but there's nothing wrong with just putting cash into a card. Most Eagles are 16-17 years old and can definitely use spending money. Some may be saving for college. Gift cards are great, too. Places like Amazon, Target, or Walmart are popular, as are places that sell outdoor gear, like REI or Bass Pro Shops.
If you prefer to avoid a money gift altogether and want something that can be opened and kept, I have a few ideas for you. Click on the links below the photos to see the items. Affiliate links below.

*  Eagle Figurine  *  Eagle Scout Centennial History  *  Eagle Scout Compass  *  Legacy of Honor Book  *
If you want to buy a gift rather than give money or a gift card, I suggest checking with the parents first. A compass is handy, but not if the Eagle already has one they use and really like. Same with knives, survival tools, outdoor equipment, etc. These can make wonderful gifts that are cherished, of course, but it's best to check.
If you happen to be the Eagle reading this post, remember to properly thank everyone who gives you a gift. Trevor had a LOT of thank you notes to write, so we kept the design really simple. (I say "we" because I made the cards - after he approved my design - then he wrote the notes and I addressed the envelopes.) I used the header of the program for the main part of the card, with strips of patriotic washi tape above and below. 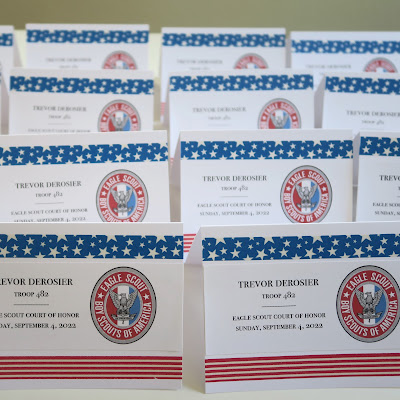 If you have any other suggestions for great gifts for Eagle Scouts or want to share what your troop does, please tell me in the comments!
Email ThisBlogThis!Share to TwitterShare to FacebookShare to Pinterest
Labels: Boy Scouts, Eagle Scout, Gifts