If you were to run into Trevor, chances are almost 100% that he'd be wearing one of three things: a Scout uniform, a bunny t-shirt, and something with a raptor on it. I raided his dresser when he was on a Scout trip and photographed all of his rabbit and raptor shirts. It turns out he has ten rabbit shirts (8 short-sleeved and 2 long-sleeved). He only has two raptor shirts, but he also has a raptor hoodie, a raptor raincoat, and a raptor jacket. I didn't include those in this layout. 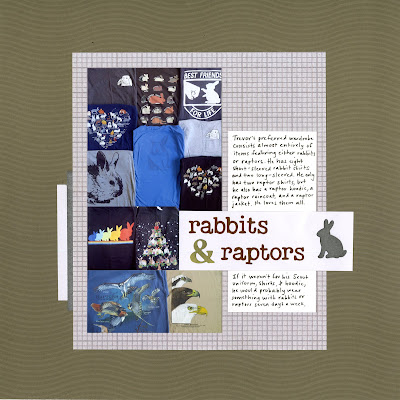 Rabbits and Raptors (affiliate link)
I enjoyed putting this page together. I don't usually make layouts without at least one deRosier in them (human or rabbit), so it's fun to do something different.
Email ThisBlogThis!Share to TwitterShare to FacebookShare to Pinterest
Labels: Layouts, Trevor