On Monday, I celebrated my 40th birthday. 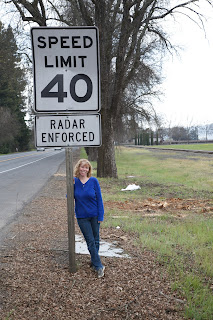 First, what I will not be doing:

So what will I be doing?  Most of my items are very simple and totally ordinary things that I have never done but have always wanted to try.  They are mostly inexpensive and are things that Steve and Trevor and/or friends can do with me.  You can see the beginnings of my list here.

I wanted to start my 40 Things off with a bang, so on the morning of my birthday we headed out to accomplish the first item on the list.

This was a suggestion from my friend Michelle.  We got in the car, set the trip odometer to 0, and drove until we hit 40 miles.  Here's the scene, exactly 40 miles from our house: 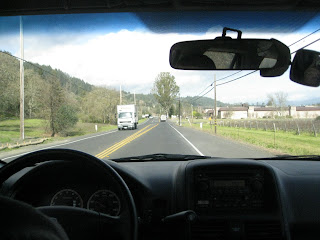 FYI, I took this picture leaning forward from the back seat.  Steve was driving.  It looks like no one is driving, but
you can see his shoulder in the corner of the picture and the top of his head in the rearview mirror.


We hit 40 miles just a few yards past the Culinary Institute of America at Greystone.  I've been there several times and ate lunch there for my 31st birthday (YUM!), so while it is an awesome place, it didn't fit the criteria of somewhere I'd never been.  We continued on and stopped at the Petrified Forest in Calistoga, CA.  I've never been there, but have always wanted to.  Perfect! 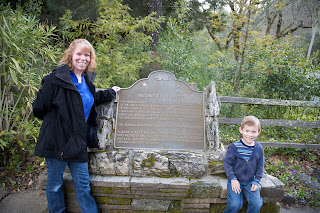 Over 3 million years ago, a volcanic eruption 7 miles to the northeast leveled the trees here.  Water holding silicates from the ash seeped down into the gaps of the tree fibers.  Over time, each cell of wood was replaced by crystalized silica and the trees became stone.

This place was totally cool!  The 'trees' (now stone) were so beautiful and so interesting.  Steve got some great pictures, including this one: 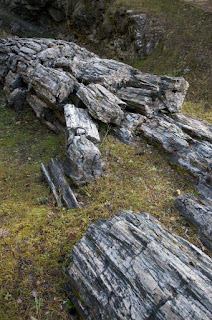 During the rest of our 40 Mile Adventure, we did some geocaching, searched for an appropriate sign and took the "40" picture at the top of this post, browsed at Dean and Deluca, ate an amazing lunch (more on that later), played at a park, and visited an iconic statue I'd never seen up close (more on that later too).

OK, so the original goal on my list was to eat at The French Laundry, probably the most famous and well-respected restaurant in the United States.  We did not do that.  Steve had offered to take me there for my birthday (before we knew about the layoff), but I turned him down.  My Irritable Bowel Syndrome (IBS) is under control with medication, but I still have to be very cautious about what and how much I eat, or I end up with unbelievable pain that lasts for days.  The French Laundry has a prix fixe menu, so I wouldn't be able to order just a small amount of food.  Reservations need to be made far in advance, which doesn't work well for me anymore either.  I never know when flare-ups will come and I'll have no interest in eating.

So instead of The French Laundry, we ate at Thomas Keller's OTHER famous California restaurant, Bouchon.  I am so glad we did!  The food was amazing.  Since it was lunchtime, it was more affordable than dinner would have been.

Our waiter made Trevor an off-the-menu sparkling lemonade concoction that was so delicious and refreshing!  I couldn't resist sharing. 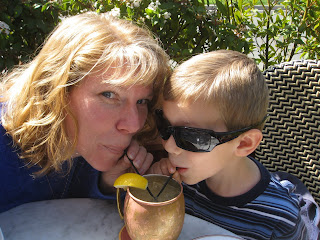 For the three of us, we ordered one appetizer, one bowl of soup, and one entree.  It was the perfect amount of food.  Our appetizer was a potato gratin with bacon and reblochon cheese.  It was piping hot, gooey, rich, and amazing. 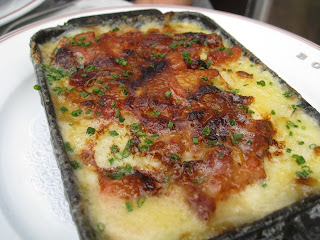 Our soup was cream of onion and mushroom.  It was perhaps the best soup I've ever had... and I don't even like mushrooms! 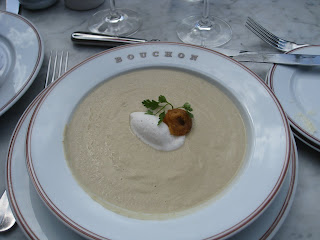 Our entree was a pan-seared flatiron steak with carmelized shallots and a herb butter.  Oh my gosh.  So good. 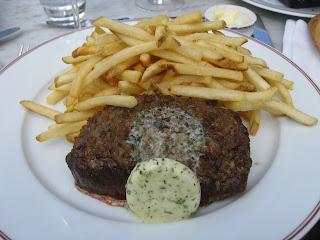 It wasn't The French Laundry, but now I can say I've eaten one of the best meals of my life at a Thomas Keller restaurant.


3. Try a Macaron
Next door to Bouchon is Bouchon Bakery.  Among other things, they are famous for their macarons.  My friend Amanda suggested I add "try a macaron" to my list of 40 things, so we picked up three macarons from the bakery.  We were way too full to eat another bite, so we got them to go.  We got chocolate, raspberry, and salted caramel. 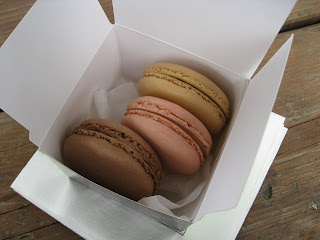 We ate them a few hours later.  Yum!  They weren't quite what I was expecting, but they were definitely good.  We each tried all three.  My favorite was the raspberry, Steve's was the caramel, and Trevor's was the chocolate.

As we were driving, I mentioned how I've never stopped at the Grapecrusher Statue at the intersection of Hwy 29 and Hwy 128, despite driving past it hundreds of times.  So we stopped!  Now I can say that I've been there.  I learned that it was made by Gino Miles and erected in 1987.  It is dedicated to workers who labor in the vineyards. 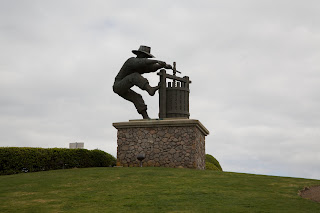 It was larger than I thought! 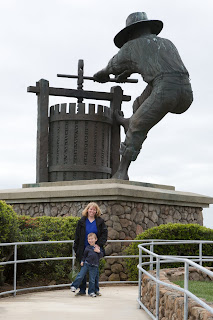 5. Eat at an Afghan Restaurant

After our amazing lunch and macarons, I wasn't very hungry at dinnertime.  But we'd already made plans to accomplish another item on my list- eat at an Afghan restaurant.  I've read several books about Afghanistan in the past few years and realized I don't know as much about it as I should.  We have an Afghan restaurant in town that always seems to be bustling, so when I started brainstorming my list it was one of the first things I added.

We met our friends Carl, Courteney and Kylinn at the restaurant.  My thought was that we'd order a few entrees and eat family style so that I could try as many different things as possible.  I didn't really know what to expect.  As it turns out, much of the food was familiar to me.  Some dishes were very similar to Indian food, while others had a lot in common with the Greek and Lebanese foods I've had before.  We ended up ordering chicken tikka masala, chicken tandoori, eggplant, and naan.  It came with saffron rice and salad. 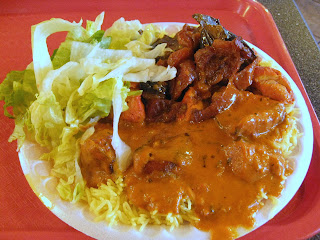 It turns out that I like Afghan food!  It was flavorful and well-seasoned, but not one bit spicy.  It was piping hot and perfectly cooked.  We'll definitely be back.

I've created a new page on my blog to track my 40 Things.  I'll post as I accomplish more items.  And I'm still looking for suggestions of things to add to my list!  I have 40 on it, but it never hurts to have extra ideas in case some become impossible.  One of the top items on my list was to finally take the tour at Scharffen Berger Chocolate, which has been on my to-do list for years.  Alas, they no longer offer tours.  So keep the ideas coming!
Email ThisBlogThis!Share to TwitterShare to FacebookShare to Pinterest
Labels: 40 Things