Have you ever had an Egg Cream?  I've asked a bunch of people that question recently and not one of them had.  Most had never heard of it.  According to Wikipedia:

An egg cream is a beverage consisting of chocolate syrup, milk, and soda water, probably dating from the late 19th century, and is especially associated with Brooklyn, home of its alleged inventor, candy store owner Louis Auster. Modern versions of the drink contain neither eggs nor cream, although earlier versions did include eggs in the ingredients.

The egg cream is almost exclusively a fountain drink. Although there have been several attempts to bottle it, none has been wholly successful, as its fresh taste and characteristic head require mixing of the ingredients just before drinking.

I don't know when I first heard about this classic drink, but I do know that it was at least 15 years ago.  When I find interesting things in magazines or newspapers, I tear them out and file them in folders labeled Stuff to Do, Places to Go, and Cooking Ideas.  If I hear about a neat idea, I write it on a post-it note and throw it in the appropriate folder.  Every once in a while, I go through my folders to see what's there.  A lot of the ideas for my list of 40 Things came from these files.  Including "Try an Egg Cream."
By happy coincidence, Food Network Magazine (which I LOVE, by the way) published a recipe for an Egg Cream in their March issue.  You can find the recipe here: Chocolate Egg Cream Shooter.  Basically, you make chocolate syrup (sugar, cocoa powder, vanilla and salt), freeze it in a glass, then add half-and-half and seltzer.  Here's my Egg Cream: 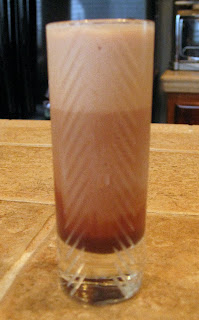 It was so good!

As it turns out (again, according to Wikipedia), March 15 was National Egg Cream day.  If I'd known that earlier, I would have celebrated on the proper day instead of 6 days late.  Oh well- there's always next year!

Goal #11 accomplished!  (Yes, I do realize I posted Goal #12 before Goal #11.)
Email ThisBlogThis!Share to TwitterShare to FacebookShare to Pinterest
Labels: 40 Things, Recipes