The Fiskateers' March color challenge was an easy one- create something green.  I decided to tell the story of how we chose Trevor's name. 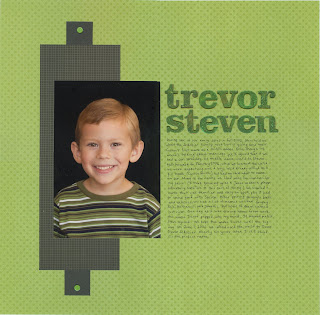 Journaling:
During one of our early dates in fall 2002, Steve told me about the deRosier family tradition of giving sons their father's first name as a middle name. Even though we weren't talking about marriage yet, I agreed that if we had a son someday, his middle name would be Steven. Fast forward to January 2006, when we learned the child we were expecting was a boy. We'd already settled on a girl name (Carissa Nicole), but had no idea what to name our son. Many of the names we liked were too common for my taste. (I think growing up as a Jones makes a person extremely sensitive to this sort of thing.) We wanted a name that was familiar and easy to spell, plus it had to sound good with Steven. After pouring through books and websites, we had a list of names we liked: Gregory, Erik, Nathaniel, and Dominic. But none of them seemed just right. One day as I was driving home from work, the name Trevor popped into my mind. It seemed perfect. Steve agreed. We kept the name secret until the big day. On June 7, 2006 we introduced the world to Trevor Steven deRosier. Nearly six years later, I still think it's the perfect name.
........


Here is the sketch I used.  I actually made it the same day I made my first sketch, but it's taken me this long to create a layout from it! 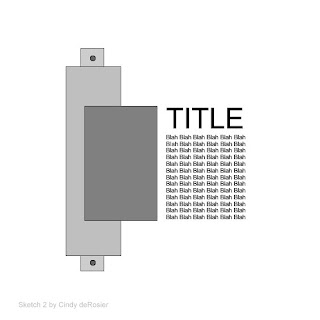 I have a few more completed sketches that I'll be revealing soon.  Stay tuned!
Email ThisBlogThis!Share to TwitterShare to FacebookShare to Pinterest
Labels: Fiskateers, Layouts, Sketches