Are you familiar with the campfire treat of a cupcake baked in an orange?  I've never actually tried it, but it popped into my mind as I continued to think up uses for the oranges from our extremely prolific tree.  I thought it would be fun to try, though we have no camping plans in the near future and building a campfire in our backyard would be inappropriate.  I vaguely recalled reading that you could make them on a backyard grill.  I checked Cupcake Project for a recipe - success!

At the end of the recipe, there was a brief note that you could bake them in an oven.  Well, that sounded even more appealing than firing up the grill.  The recipe was for a vanilla cupcake, but I decided that I'd make chocolate.  I like orange with chocolate, plus it seemed more creative than actually following a recipe.  (Savvy readers will note the use of foreshadowing.)

I began by choosing three huge oranges.  (Imagine grapefruits instead of oranges.  That size.)  I washed them, cut off the top third or so, then removed the pulp using the Avocado Cutter, which worked very well. 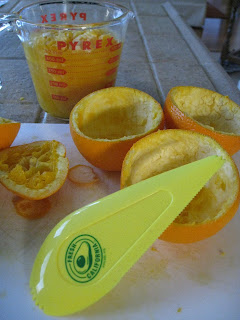 Trevor helped me make chocolate cake batter.  I strained the juice from the orange pulp I'd removed, so that we could replace the liquid in the cake with orange juice.  Because why not change all sorts of variables when you try something new?  (A bit more foreshadowing....) 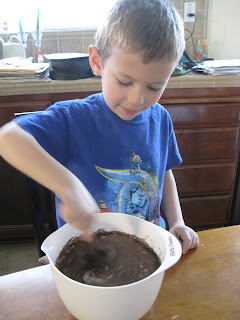 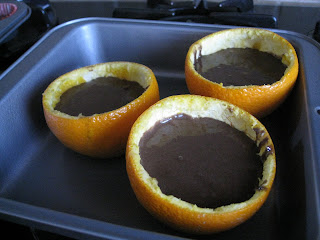 Apparently that was too full.  Or maybe the spillage was because of the orange juice in the batter.  Or the size of the oranges.  Or the fact that I didn't provide a support to prevent the oranges from tipping.  It's unclear.  Cupcake fail! 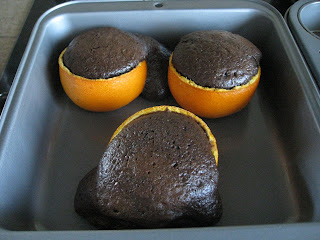 Well, perhaps not a total fail.  I cut the excess off.  Tasty!  The chocolate had a subtle, yet delicious, orange flavor to it. 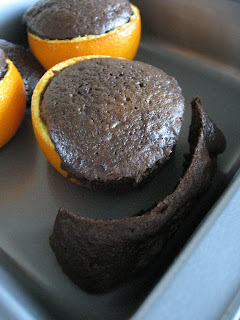 I topped each orange with chocolate syrup and whipped cream.  They were pretty good.  Not amazing, but good.  And if I hid the cut side, they looked pretty good too. 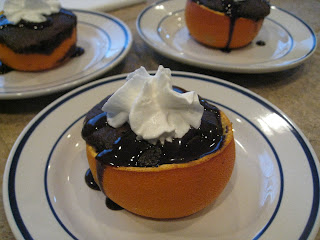 I'm not going to include a recipe, since mine didn't really work all that well.  (Follow the Cupcake Project link for an actual recipe.)  I'm not sure exactly what my problem was, but regardless it was a very fun experiment.
Email ThisBlogThis!Share to TwitterShare to FacebookShare to Pinterest
Labels: Recipes