One of my favorite ways to celebrate New Year's Eve is to invite friends over and cook a big, fancy dinner.  Back in 1999 when I was single, childless, and on a six-week break from teaching year-round school, I made this crazy, over-the-top six course formal meal for 12 that took me three days to make.  It was totally awesome.  Needless to say, I don't have that kind of time (or energy!) any more.  But I still love to throw fun dinner parties.

A few weeks ago, I decided that I wanted 2012's New Year's Eve dinner to have a theme. Going with the obvious, I chose the word "New."  All the foods and drinks I would serve would have the word "New" in them: New York steak, new potatoes, and... um... well, surely there must be a bunch of others!  I began my research.

As it turns out, there aren't all that many foods with the word new in them.  I was committed to New York steak and new potatoes.  But what about a vegetable?  I didn't really want to do green salad with Newman's Own salad dressing.  That doesn't really say "fancy dinner party" to me.  And what about a soup course?  New England Clam Chowder fit the theme, but I don't eat clams.  Dessert?  I couldn't exactly open a package of Fig Newtons for a dinner party.  Or could I?

Fortunately, our guests (Trevor's godparents) understand me well and wouldn't have blinked an eye at me serving a packaged cookie I don't even like in order to stick with my theme. 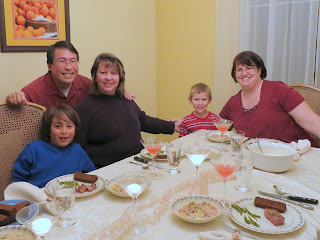 But it would have totally bugged me to do that.  Time to get creative.  I started with the clam chowder.  What if I took out the clams and replaced them with ham?  I could totally get behind New England Ham Chowder!  Turns out it's delicious.  See those potatoes?  They're new potatoes, of course. 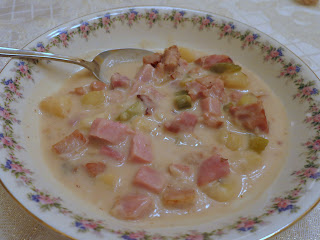 I also made some New England Brown Bread.  Are you familiar with it?  You're supposed to steam it in a can.  I didn't have the right size of can, so I steamed it in a loaf pan.  It wasn't round, of course, but other than that it came out just right. 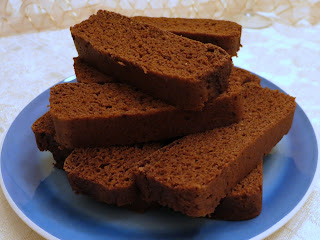 During my research, I kept coming across Lobster Newburg.  Shrimp Newburg.  Crab Newburg. All unacceptable, since I don't eat any types of seafood.  Would Newburg sauce work on a vegetable?  Maybe asparagus?  As it turns out, yes! 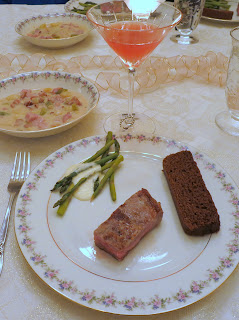 But what about drinks?  I was happy to see that there are a lot of cocktails with the word new in them.  Steve made us three different cocktails over the course of the afternoon and evening: a New Orleans Buck, a New York Cocktail, and a New Moon.  (The kids had mocktails, obviously.)  That's the New York Cocktail in the picture.
After dinner, we played a rousing game of Disney Apples to Apples.  I highly recommend it. It's a great party game. 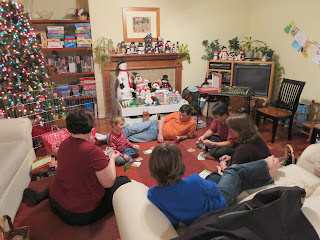 Then it was back to the dining room for dessert. So, after all my research, did I manage to find a dessert with the word New in it? Sadly, no.

I reluctantly bought Newtons.  But I didn't get the Fig Newtons I don't like.  Instead, I bought the Triple Berry Newtons (raspberry, strawberry and blueberry).  Much tastier.  I made a triple berry ice cream using the same three berries, then mixed in chopped up Newtons.  The Newtons froze a bit and added a delicious graham cracker taste to the ice cream.  Here's our Triple Berry Newton Ice Cream. 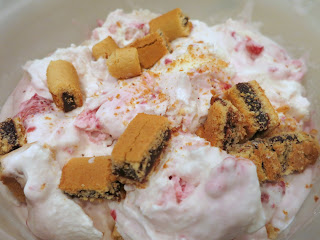 Here I am with my New Moon.  It was not the tastiest of the three cocktails (turns out I'm not a fan of gin), but it was a lot of fun trying it. 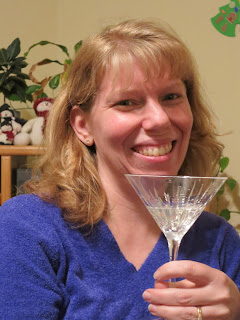 All in all, my "New" Year's Eve Dinner was a great success!  2013 is off to a fantastic start! Thanks to Jonna, Larry, Suzzi, Ronan, Steve and Trevor for an awesome night.  I wouldn't have wanted to spend it any other way.
Email ThisBlogThis!Share to TwitterShare to FacebookShare to Pinterest
Labels: Cooking Competition, Parties