Snake Cake and a Future Project

Trevor's Cub Scout Pack held their Blue & Gold this week.  Since we're relatively new to this Pack, this was our first Blue & Gold with them.  (We attended two different Blue & Gold celebrations during Trevor's Tiger Year, one I planned for the Pack we left, and one with the Pack that temporarily took us in.)  So it was a surprise to us when each of the boys was asked to bake and decorate a cake for a silent auction at the Blue & Gold.

Trevor wasn't sure what to make, so he and I sat down at the computer and scrolled through a bunch of images of decorated cakes, seeing if anything would inspire him.  He fell in love with this image of a snake cake.  It seemed manageable.  We'd bake a bundt cake, cut it into chunks, and arrange them to form a snake's body.  Then Trevor would pipe the frosting, add marshmallow eyes, chocolate chip nostrils, and a fruit leather tongue.  With a plan in place, we bought our supplies and waited until the big day.

We ended up having to have a much shorter snake than Trevor had planned, due to the fact that all completed cakes had to fit in a 13 x 9 inch cake box and we hadn't made a template ahead of time to test for size.  Oh well.  Despite being a bit stunted, it was still adorable.  Here is the Snake Cake just minutes after Trevor put it on the auction table.  Two bids already! 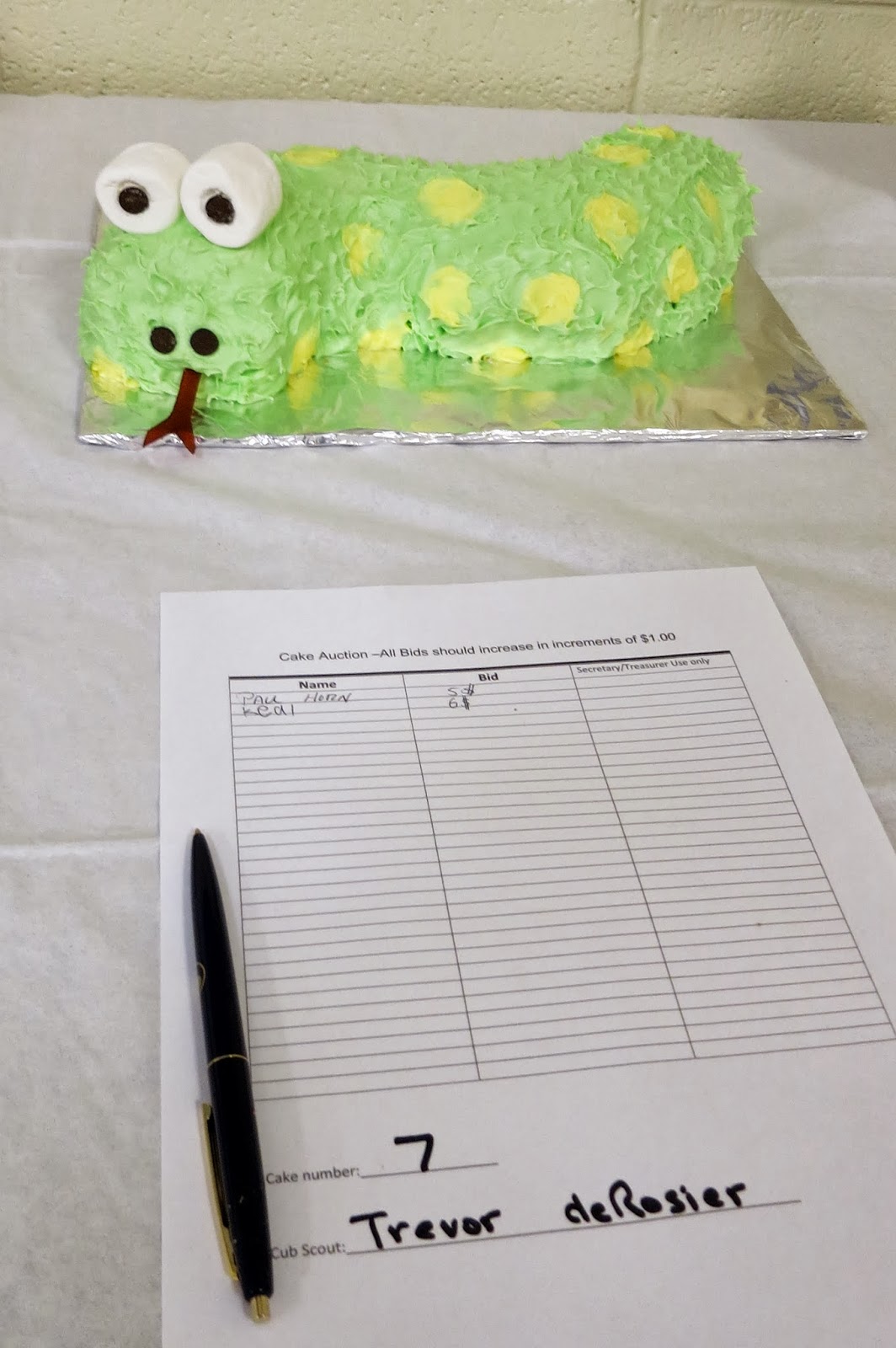 Here's a closer look from the top and the front: 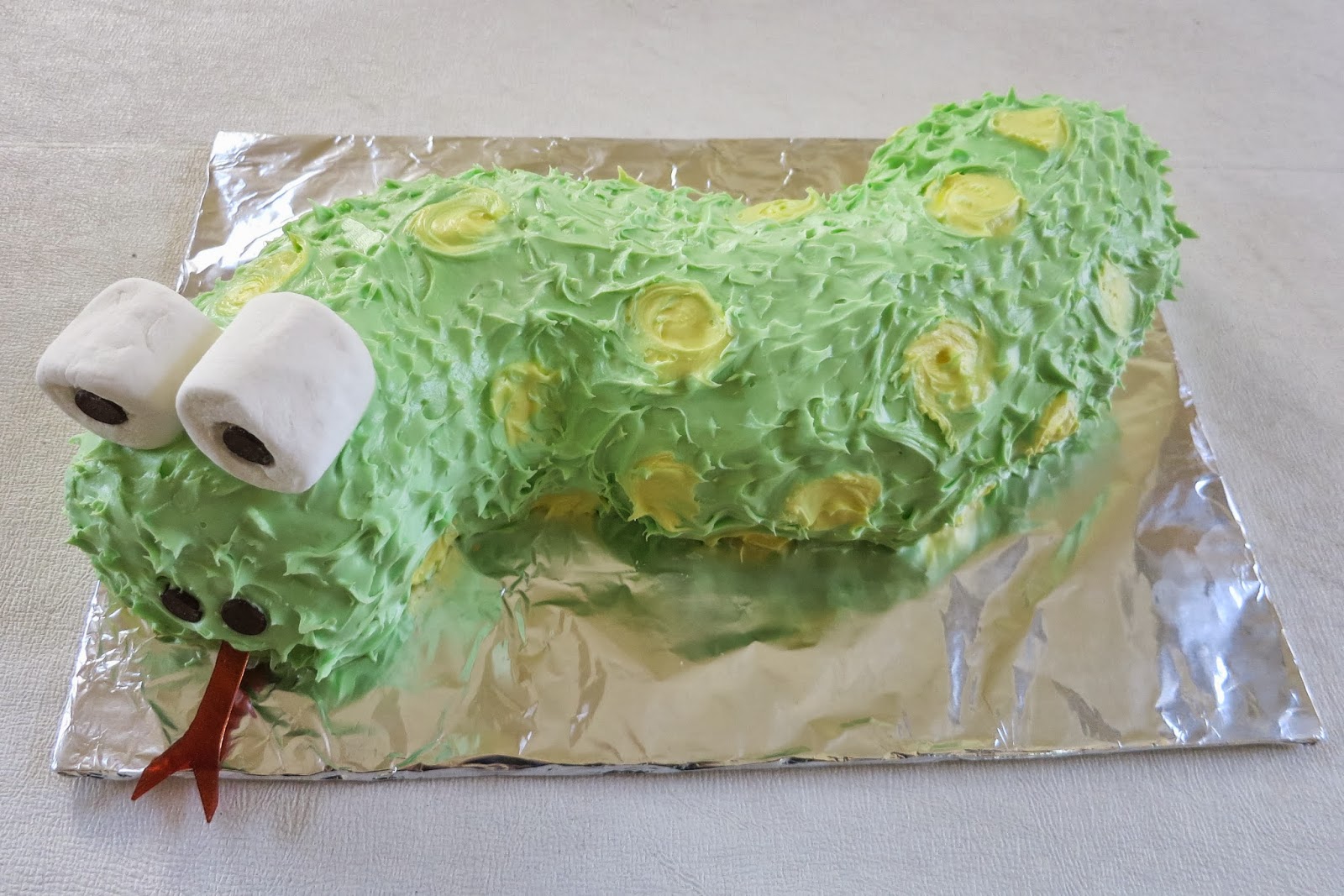 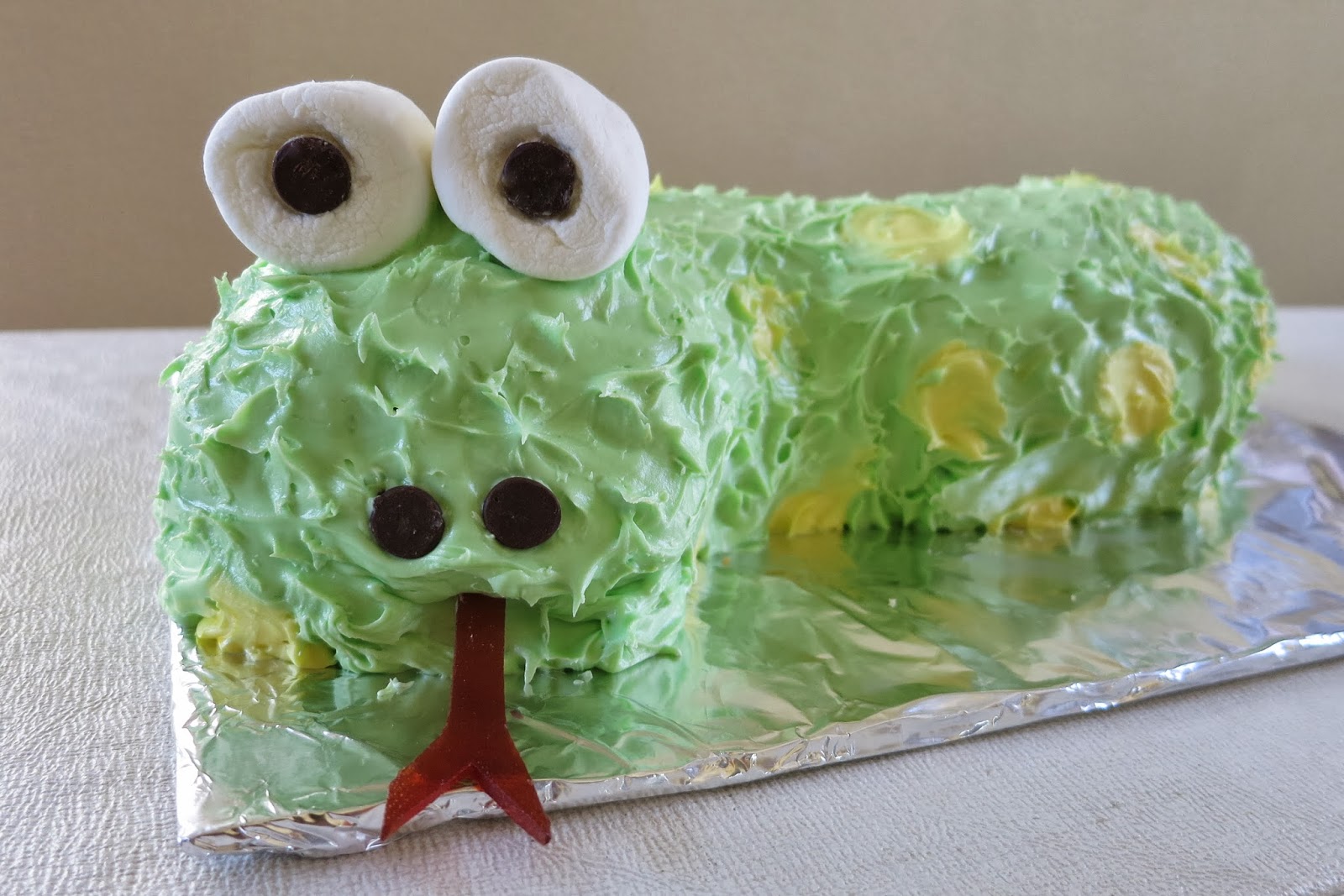 Trevor was thrilled with how his cake turned out and proud that it brought in a good amount of money for the Pack.

The cakes were fun and dinner was very tasty, but the highlight of the Blue & Gold was seeing the boys who had made rank go through their ceremonies.  Trevor and six other boys in Den 1 were awarded their Wolf.  During the ceremony, a red paw print was painted on their right cheek to signify their achievement. 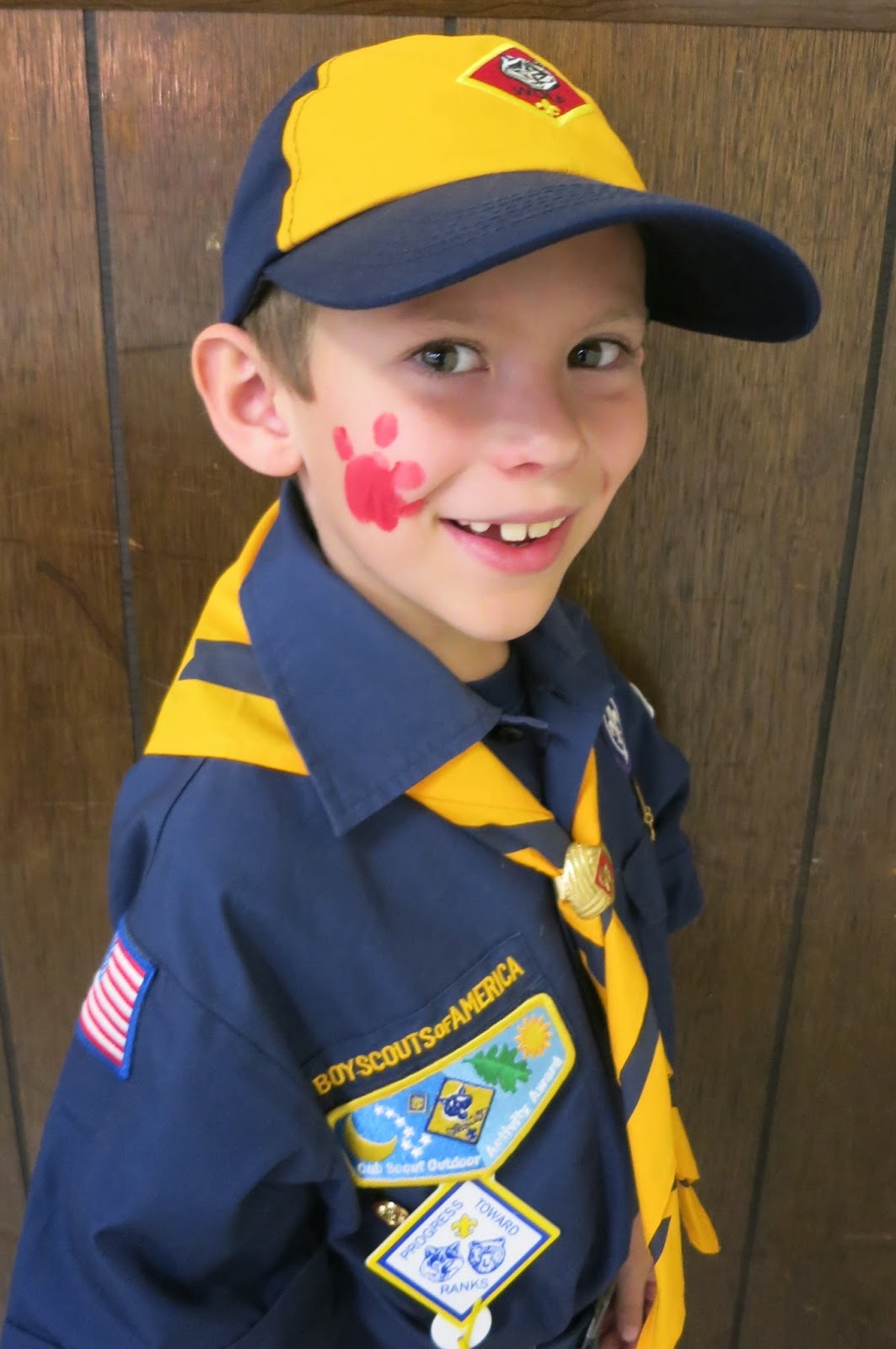 When a Cub Scout earns a rank, he receives a corresponding pin to give to his parent (traditionally, his mother) as an acknowledgement of the role that (s)he plays in supporting him through Cub Scouts.  Steve and I share Cub Scout parent duties, but I'm the one who gets the pins. 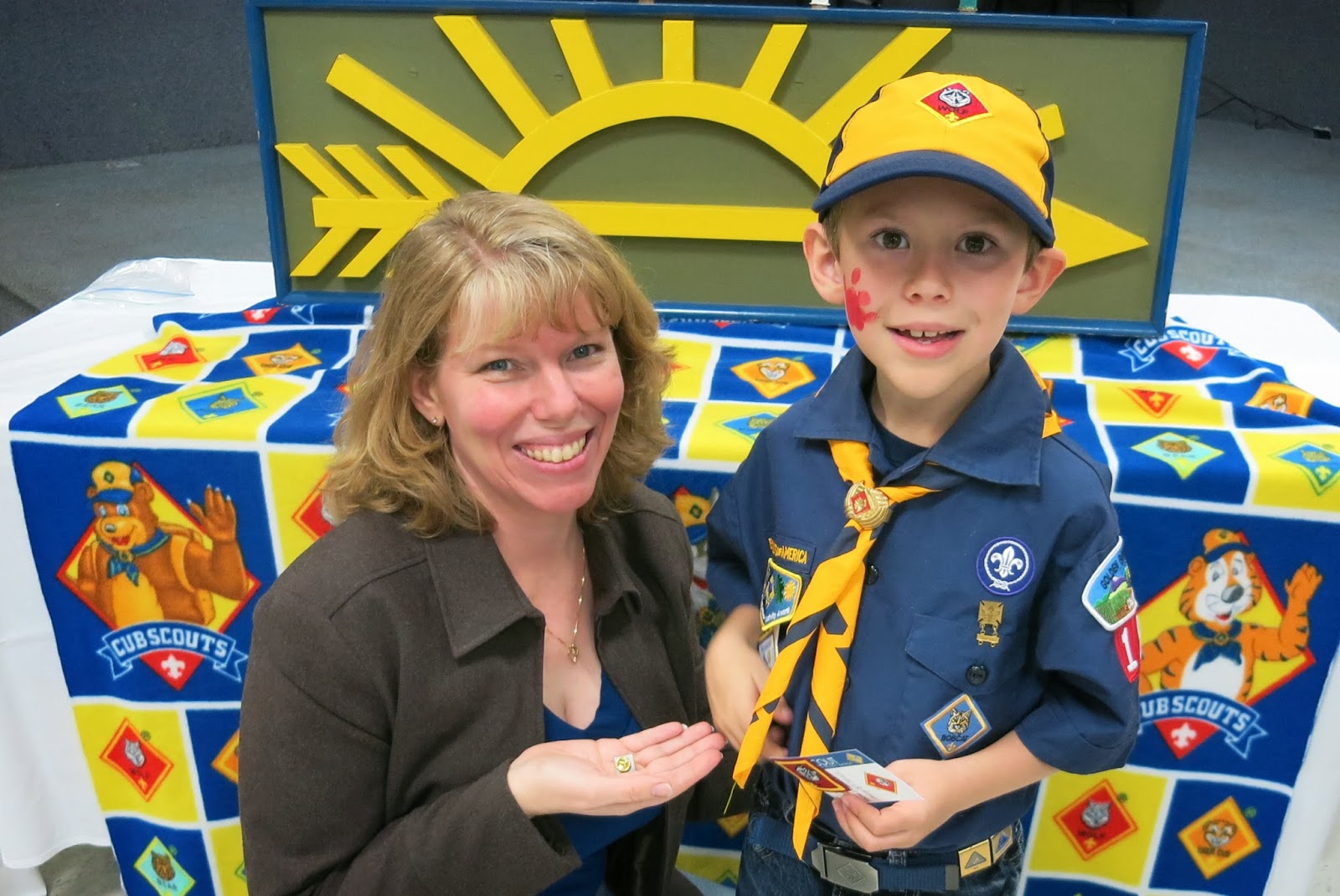 I've been storing my pins with our other Cub Scout stuff and wasn't sure if I was supposed to be wearing them or displaying them somehow.  After a quick search, I found a tutorial to make a pin necklace that looks great and seems easy enough for a sewing novice like me.  I love that it incorporates both the Cub Scout and the Boy Scout colors, with room for all the pins as Trevor moves up the ranks.  I have high hopes that in about ten years I'll be adding an Eagle pin to my collection.
Email ThisBlogThis!Share to TwitterShare to FacebookShare to Pinterest
Labels: Cake, Cub Scouts