Trevor has been having great fun taking cake decorating classes for the past 18 months or so.  So when he suggested having his birthday party at Every Baking Moment, I was totally on board. Not only would it be a lot of fun, it would be much easier than hosting a party at home like we usually do.  This year, Trevor's birthday fell on the same day as our Cub Scout Pack's Bridging Ceremony and BBQ, which meant that we wouldn't even be home most of the day to prepare for the party.  Plus, an indoor party meant not having to worry about the weather.  Last year's Angry Birds party was over 100°, which meant last-minute changes to move as much as possible indoors.  Three years ago, we had to move our Zoo Party indoors because of rain!

We arrived at the bakery about 30 minutes ahead of our guests to set up. 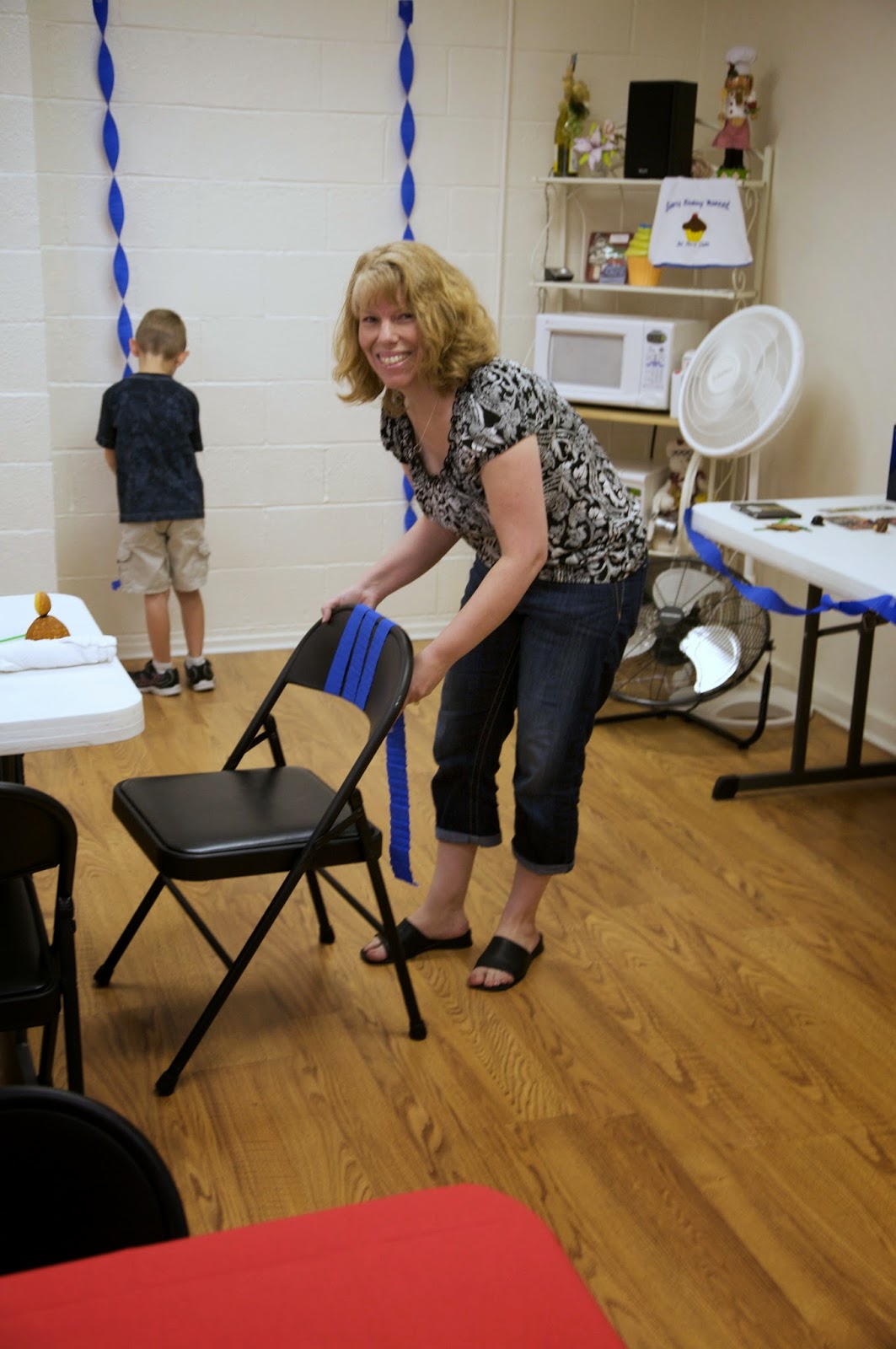 As the kids arrived, Trevor invited them each over to a craft table to decorate a white bag to hold their goodies. 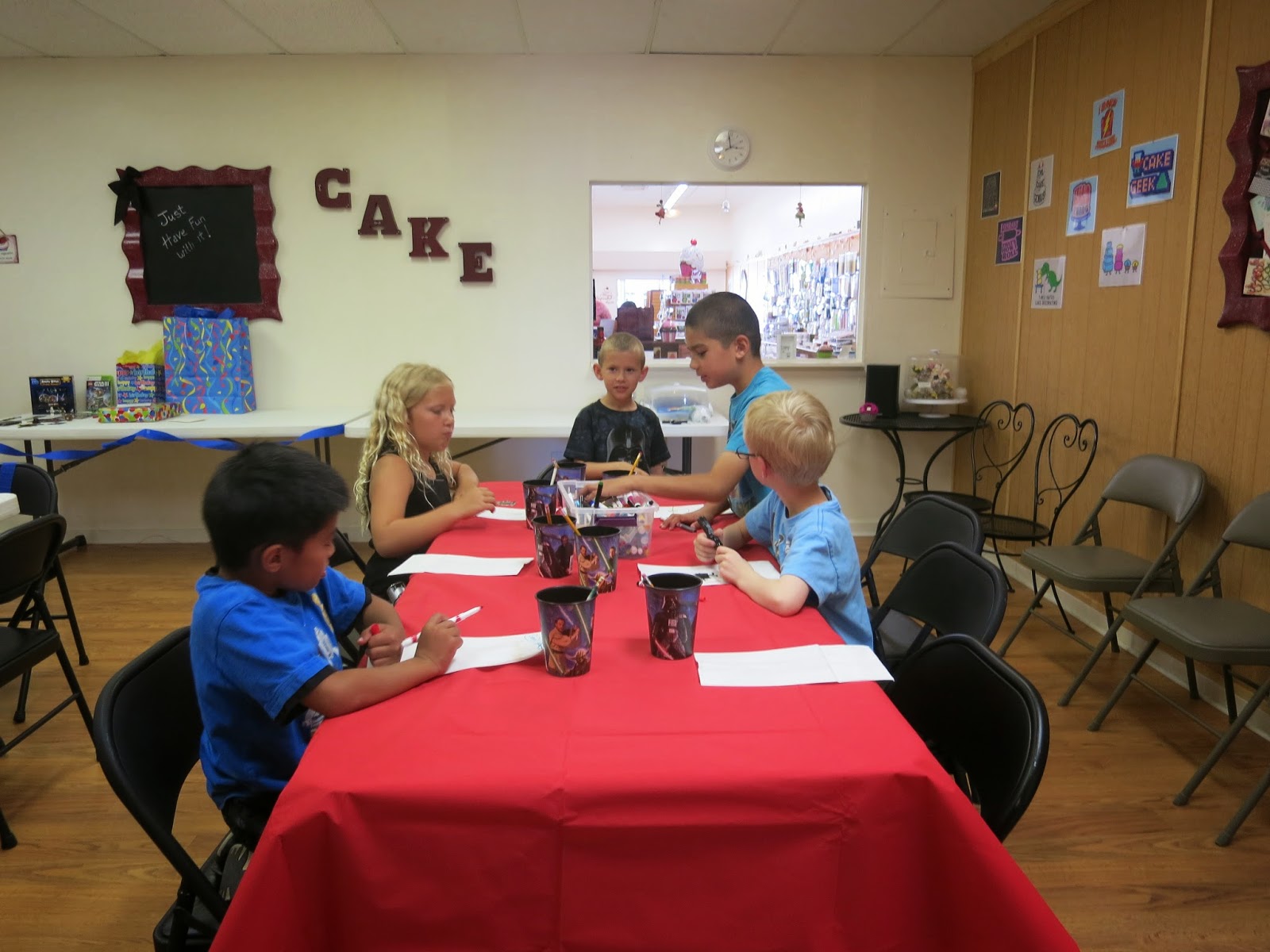 When everyone had arrived, Janis taught them how to pipe frosting, roll fondant, and decorate their cakes to look just like Yoda. 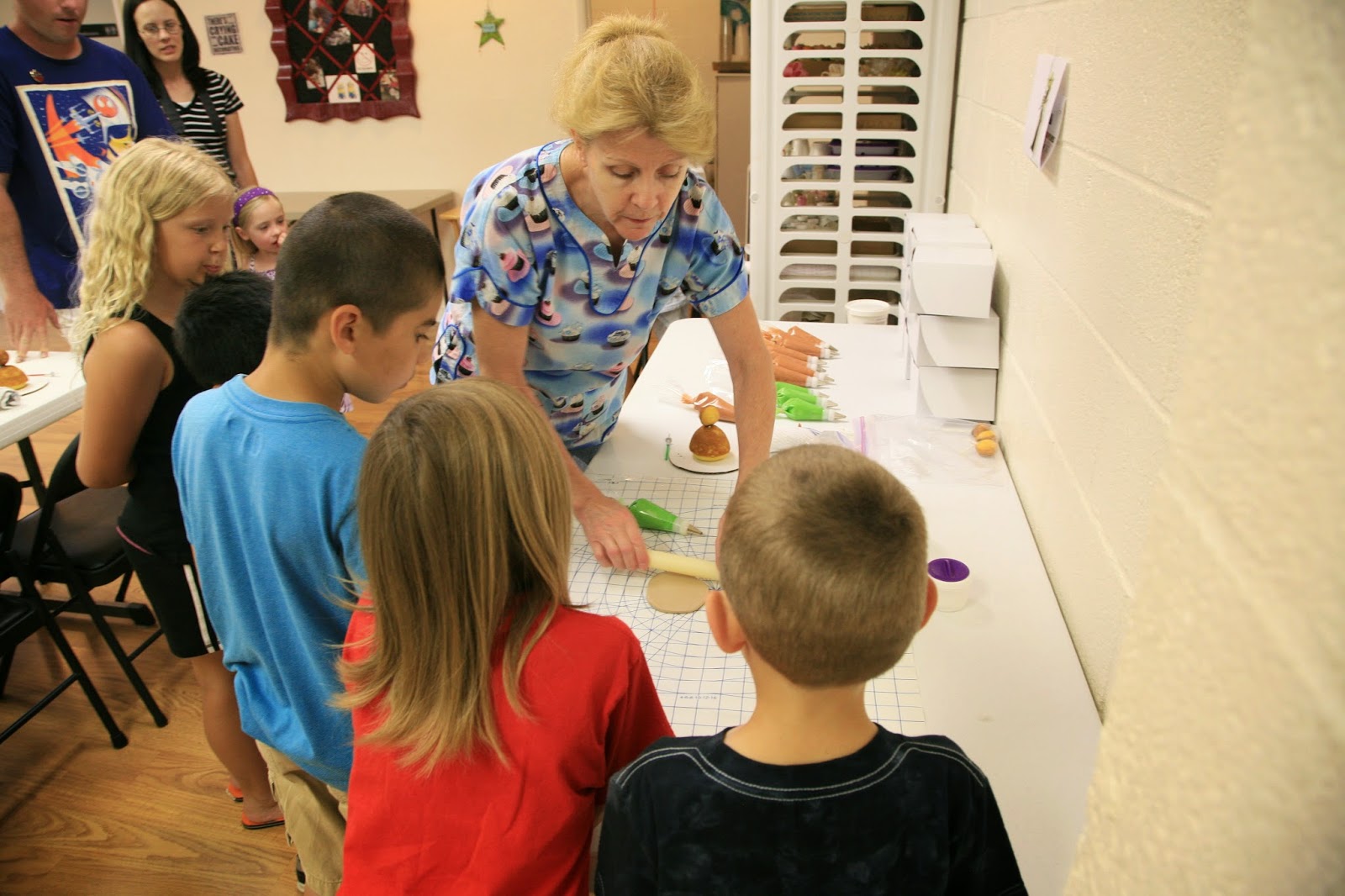 The kids went right to work.  Such concentration! 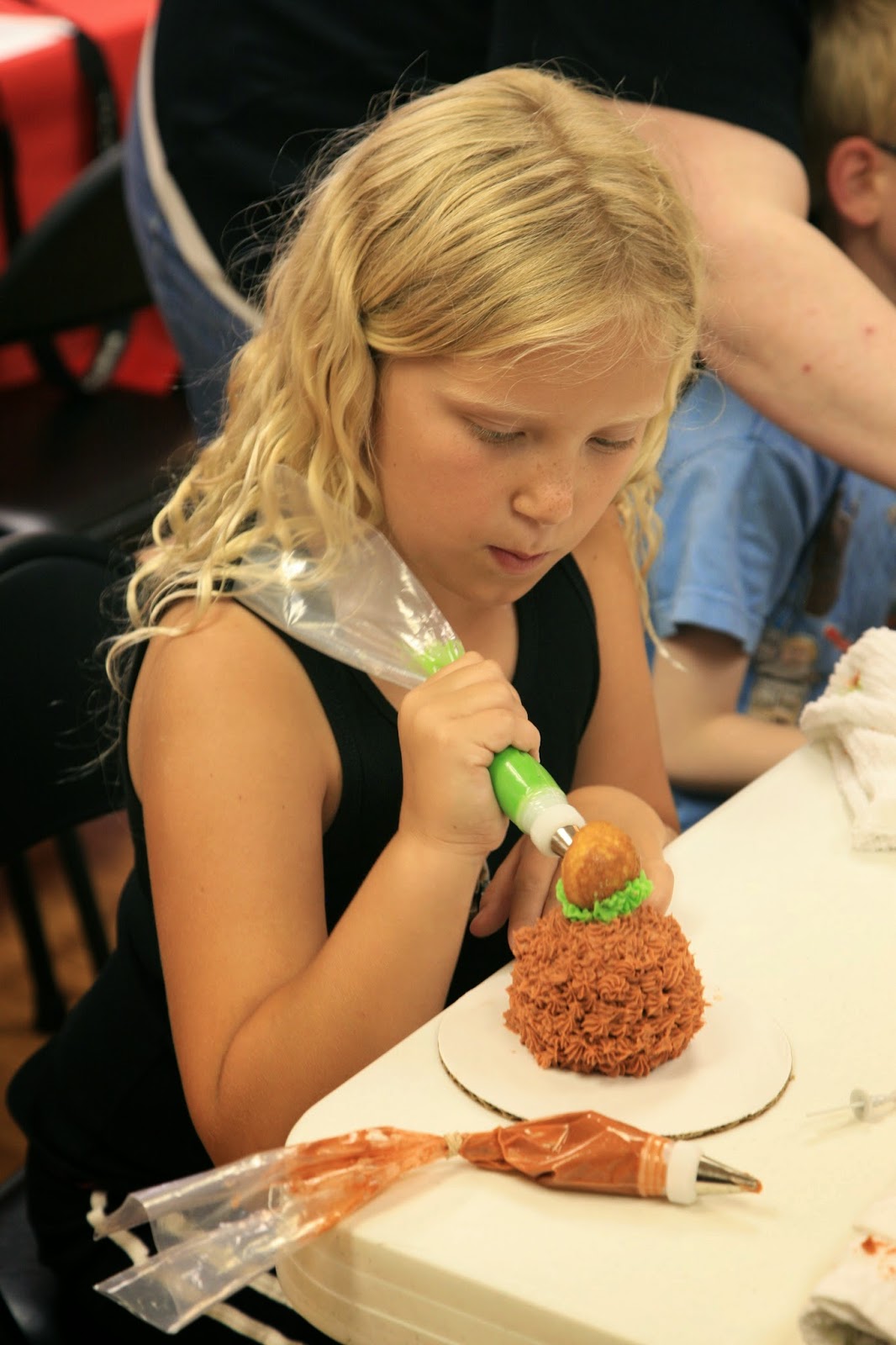 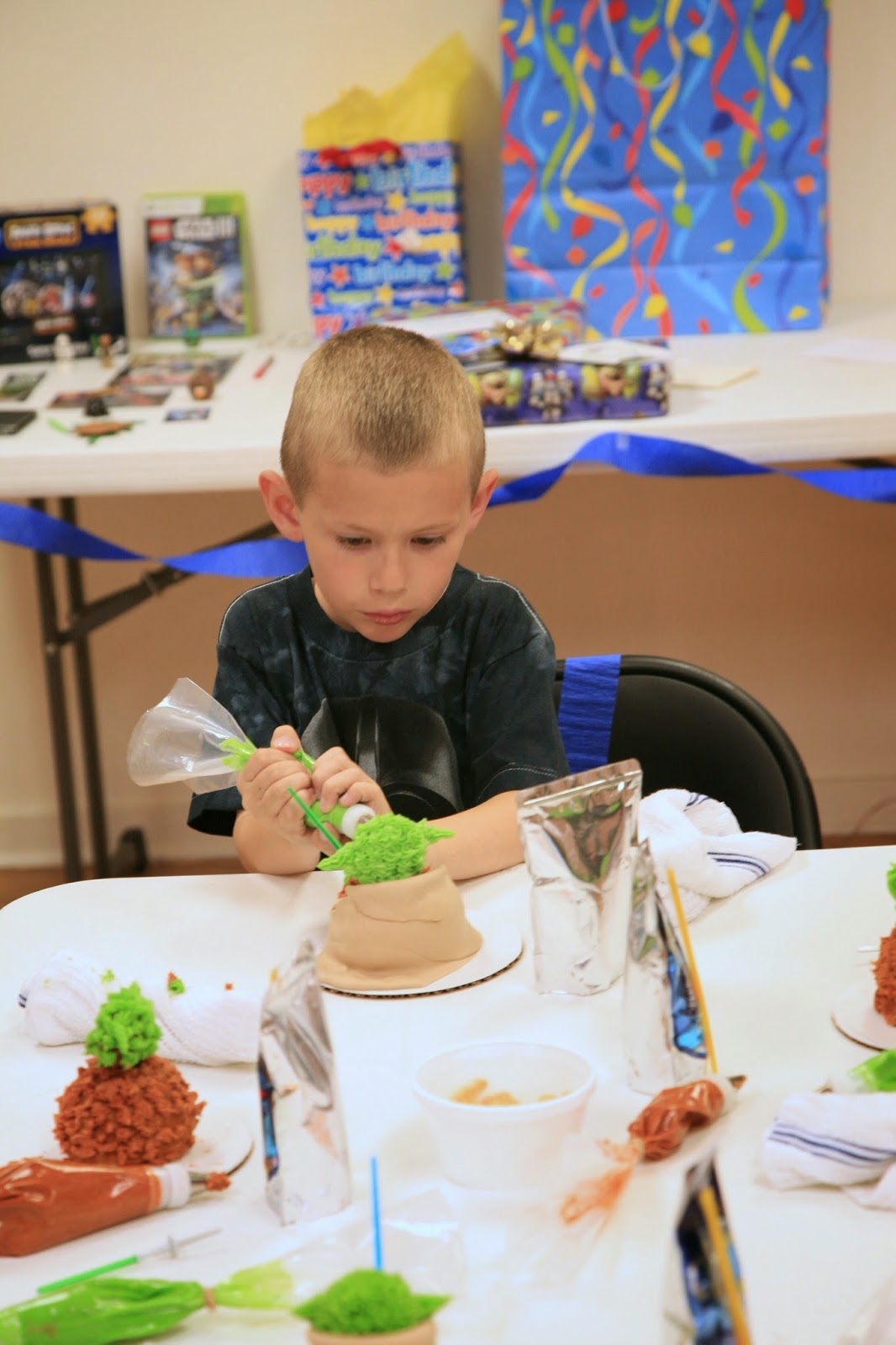 As each child finished, Steve took their picture individually with their cakes.  They all turned out so well!  Here's the birthday boy with his Yoda cake. 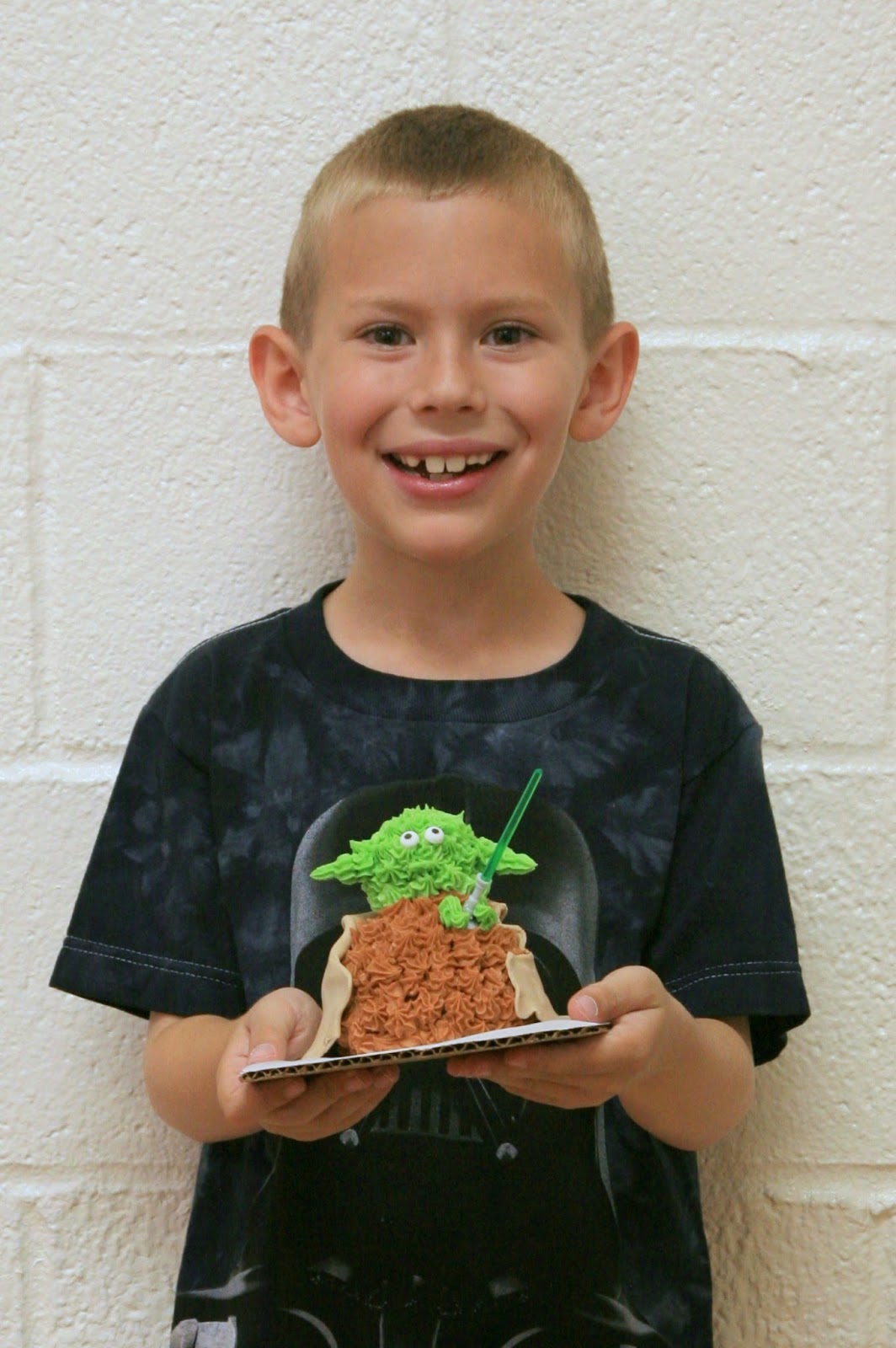 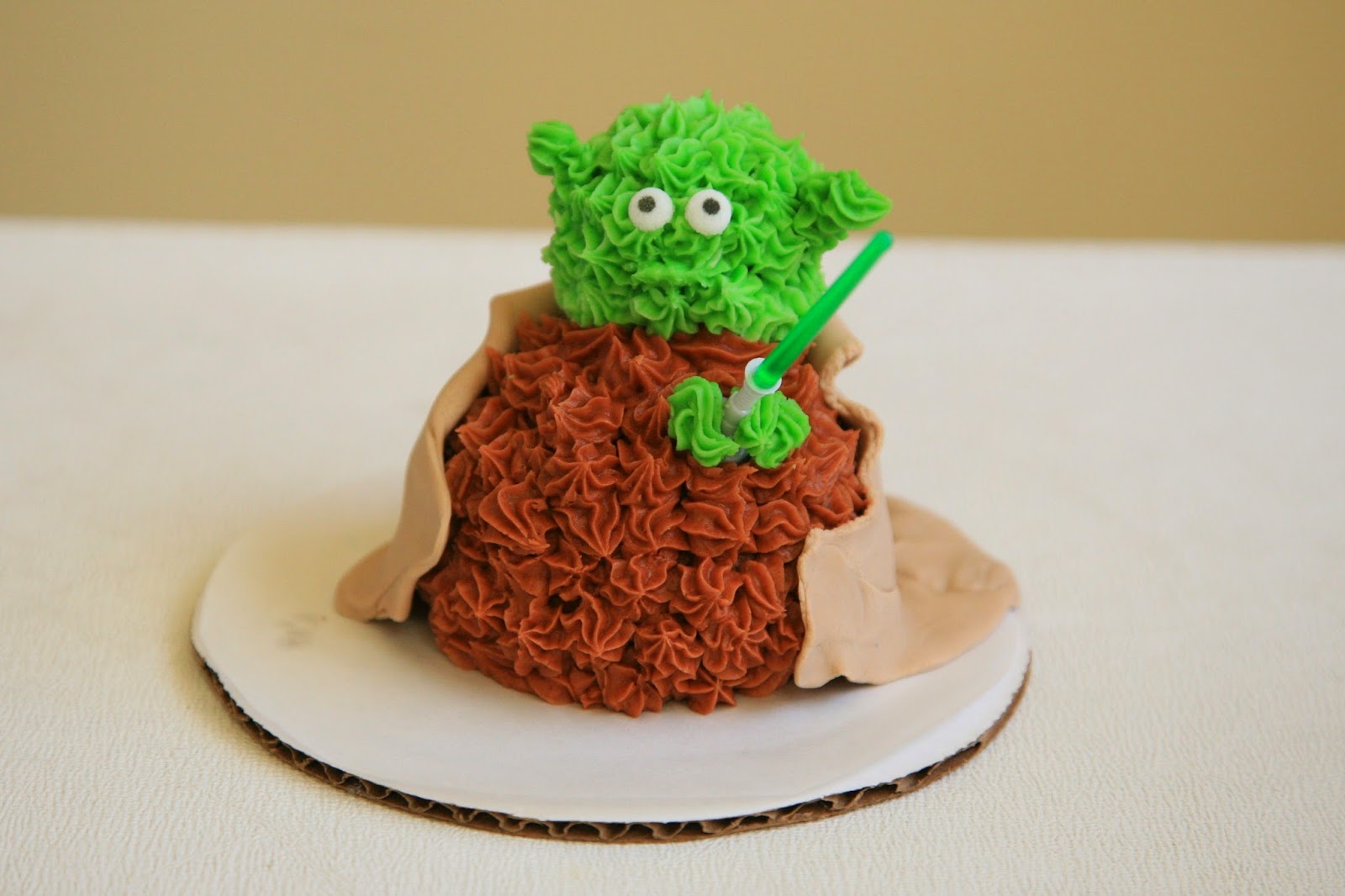 After having their picture taken, the kids headed back to the craft table.  I'd prepared a packet of Star Wars activities (word search, complete the drawing, maze, etc) from activities I found at starwars.com.  This kept everyone engaged while waiting for the slower decorators. 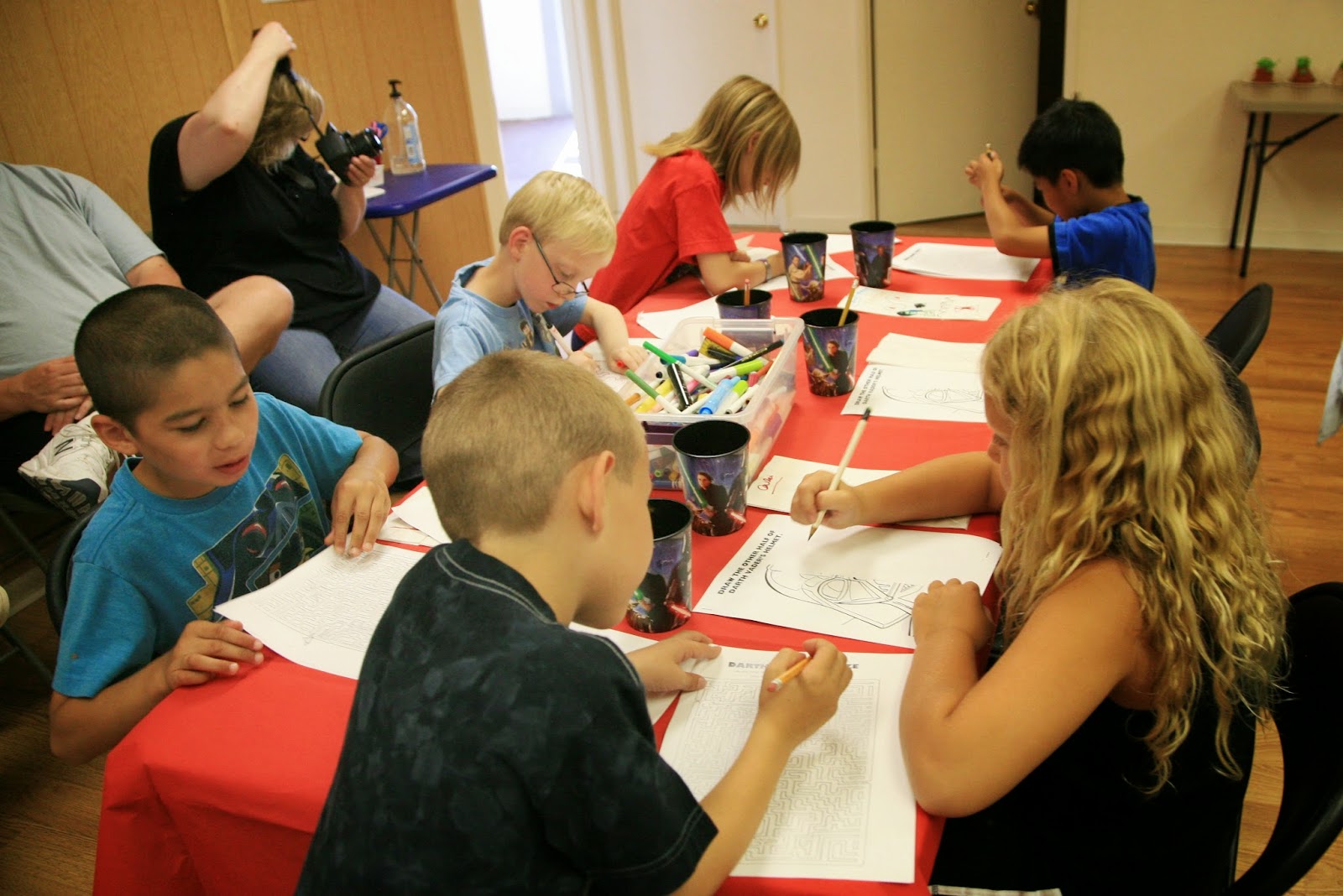 I moved the Yoda cakes off to a side table where they'd be safe.  They looked so cute all lined up!

Next, we played Star Wars trivia, using questions from starwars.com.  Since not all of Trevor's friends are into Star Wars (just like his mother), the kids worked together as one big team to earn points.  After I asked a question, they had to discuss it amongst themselves and come up with an answer.  If they got the correct answer without hearing the multiple choice possibilities, they earned 2 points.  If they needed to hear the multiple choice, then a correct answer was worth 1 point. 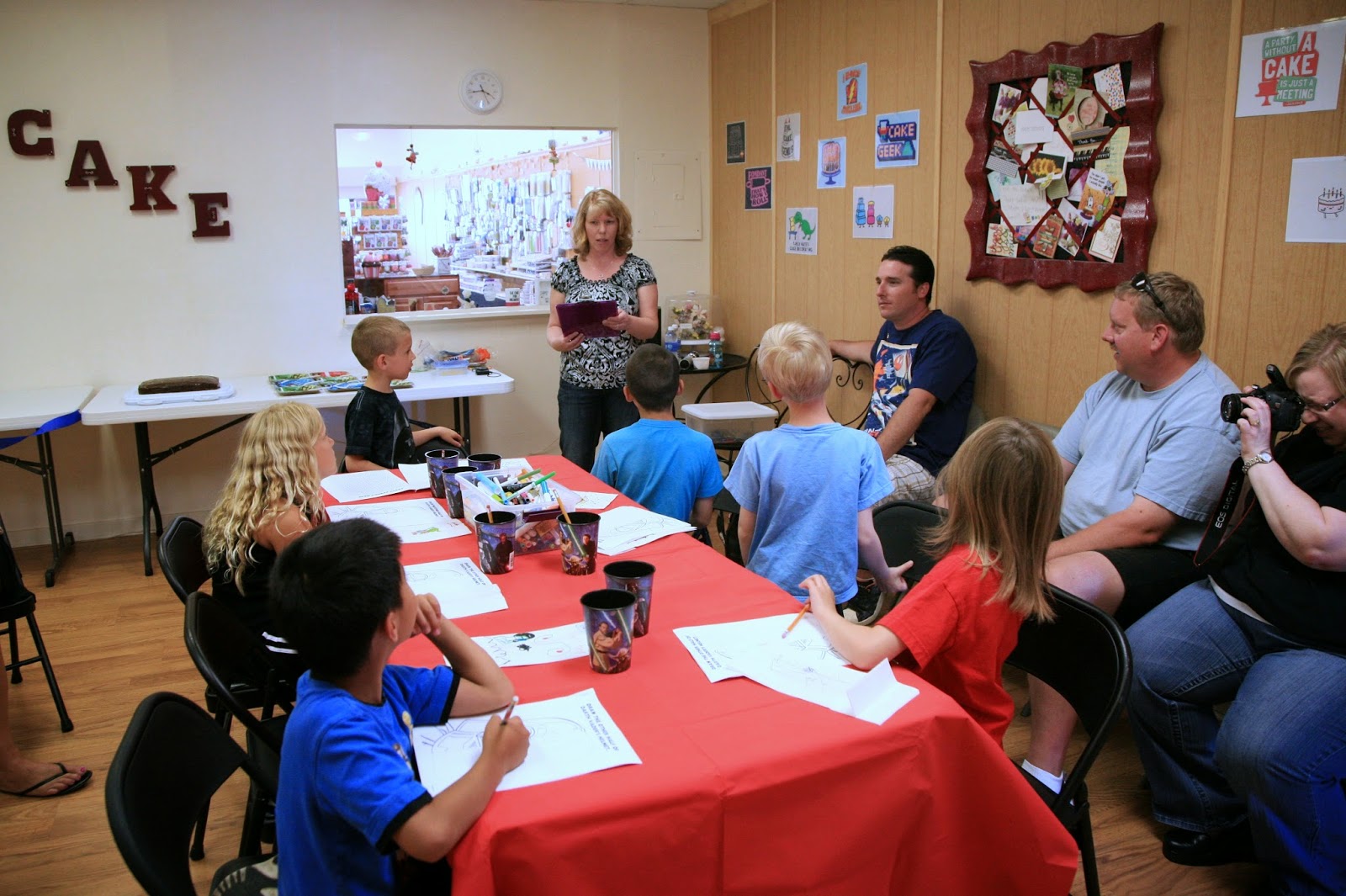 For the next game, I led the kids over to a display of random Star Wars related items that Trevor owns.  I gave the kids two minutes to work together to memorize the items. 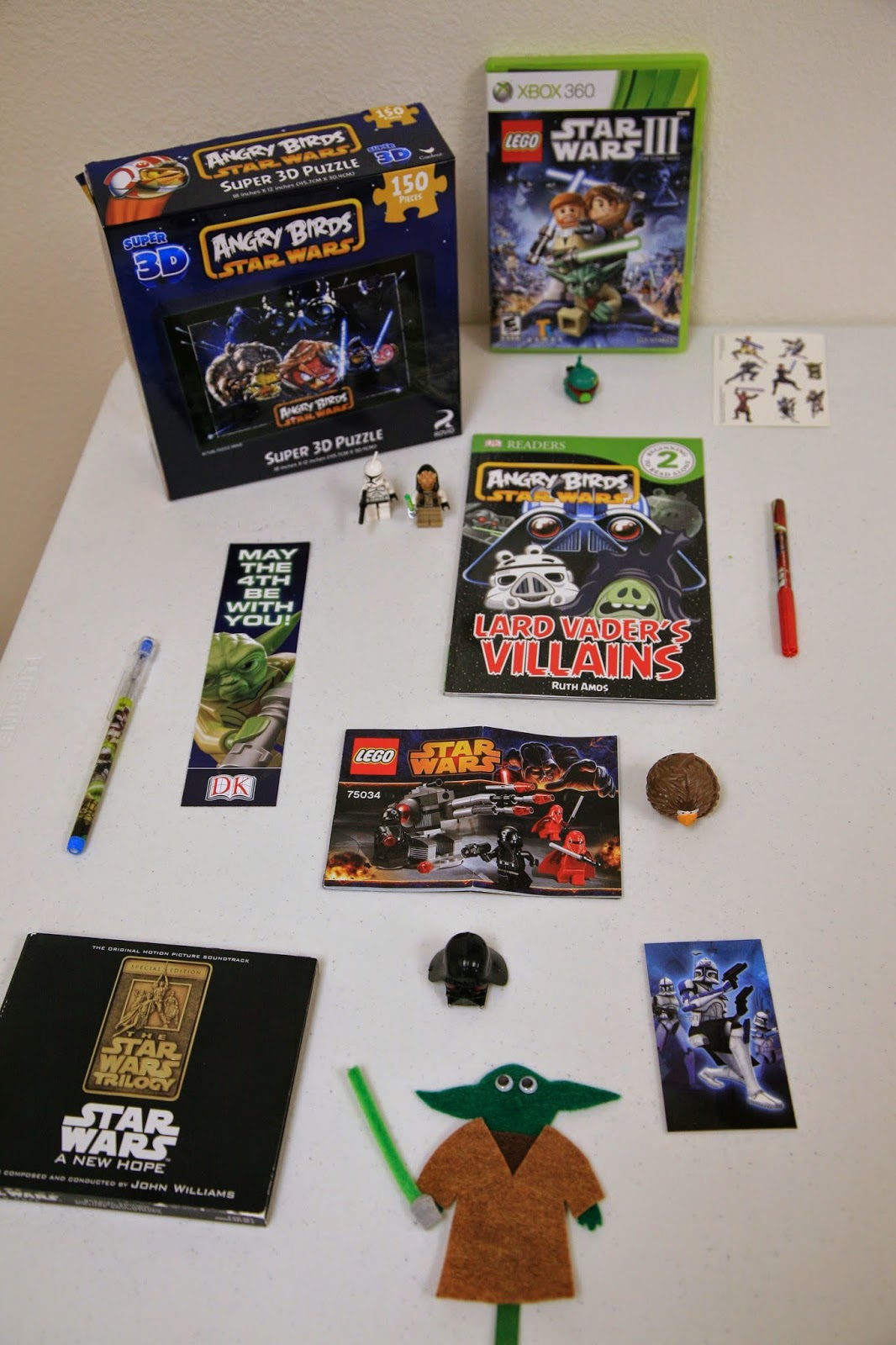 Then I lined them up with their backs to the items and had them list as many as they could remember.  As before, they worked as a team rather than against each other.  I told them that the number of items that went in their goodie bags would depend on how many points they earned as a group.  (Of course, no matter how many points they earned, that would have been the magic number required to each receive all 4 prizes.)  Look at them struggle to remember the final few items! 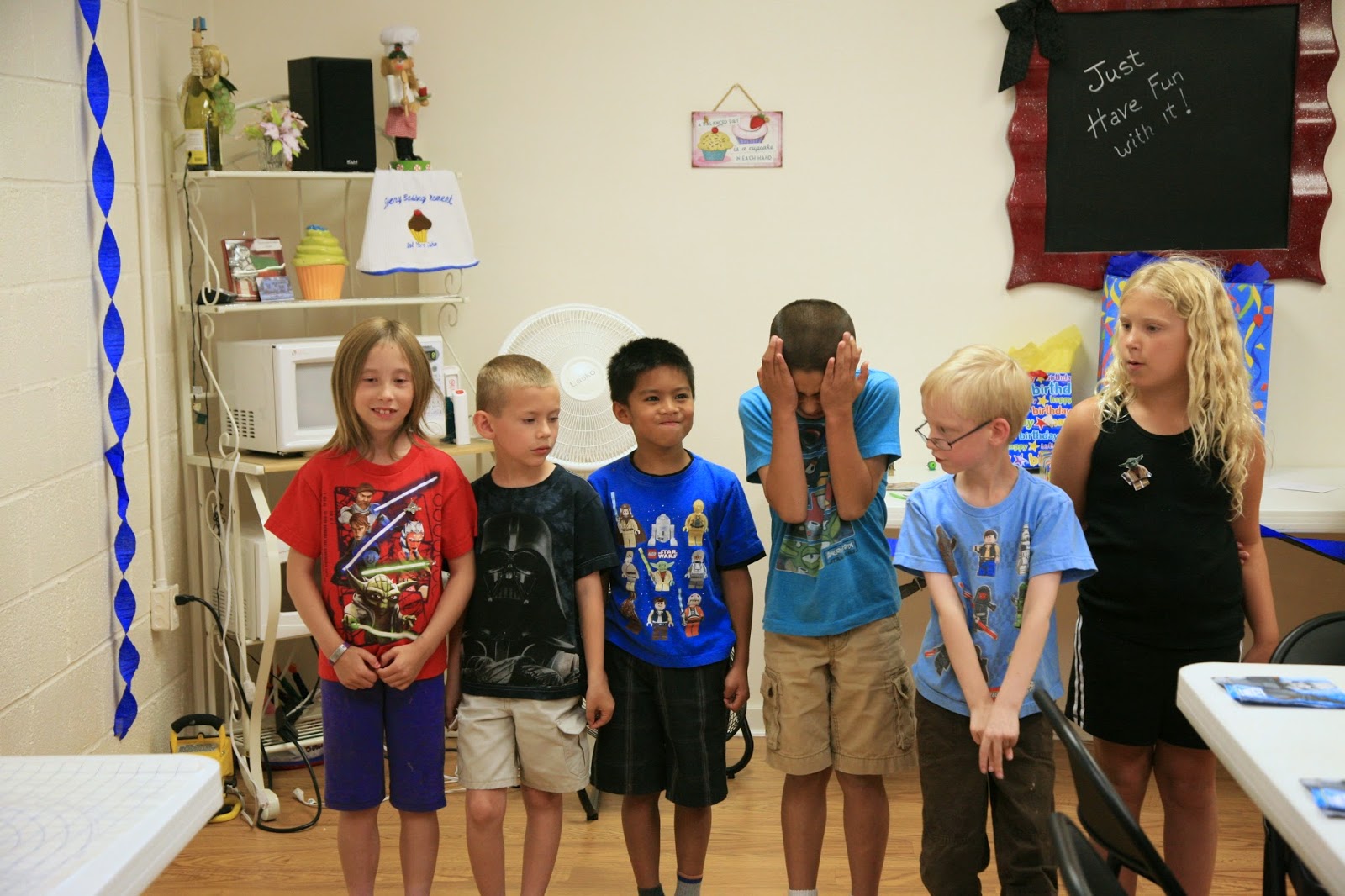 Finally, it was time for cake.  Not the Yoda cakes- they took those home as party favors so their families could see and enjoy them.  Instead, I introduced Trevor and his friends to one of my beloved traditions from childhood - the Money Cake (more about this tomorrow).  I gave each child their initial in chocolate to mark their lucky piece. 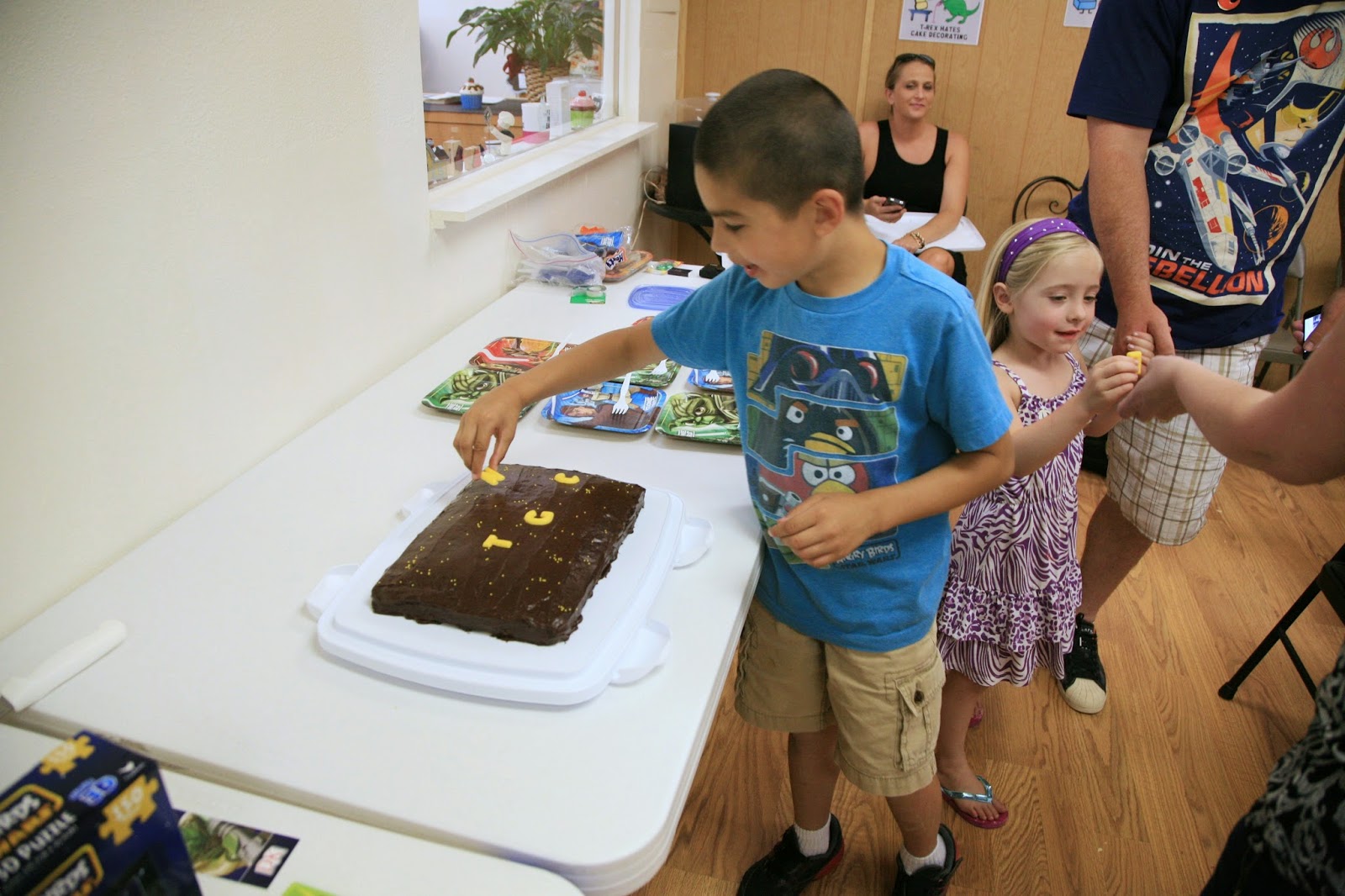 Trevor blew out his candle.... 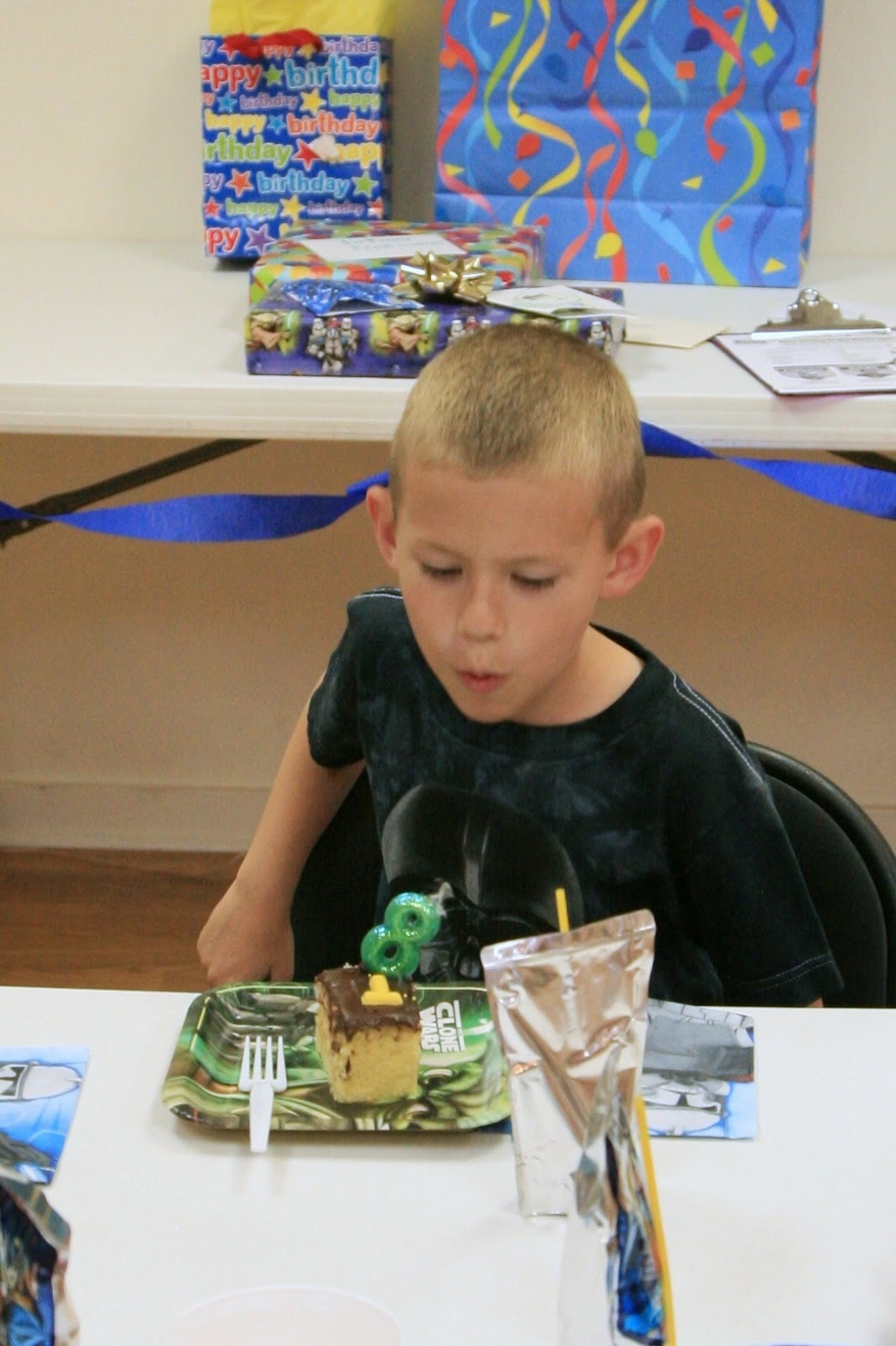 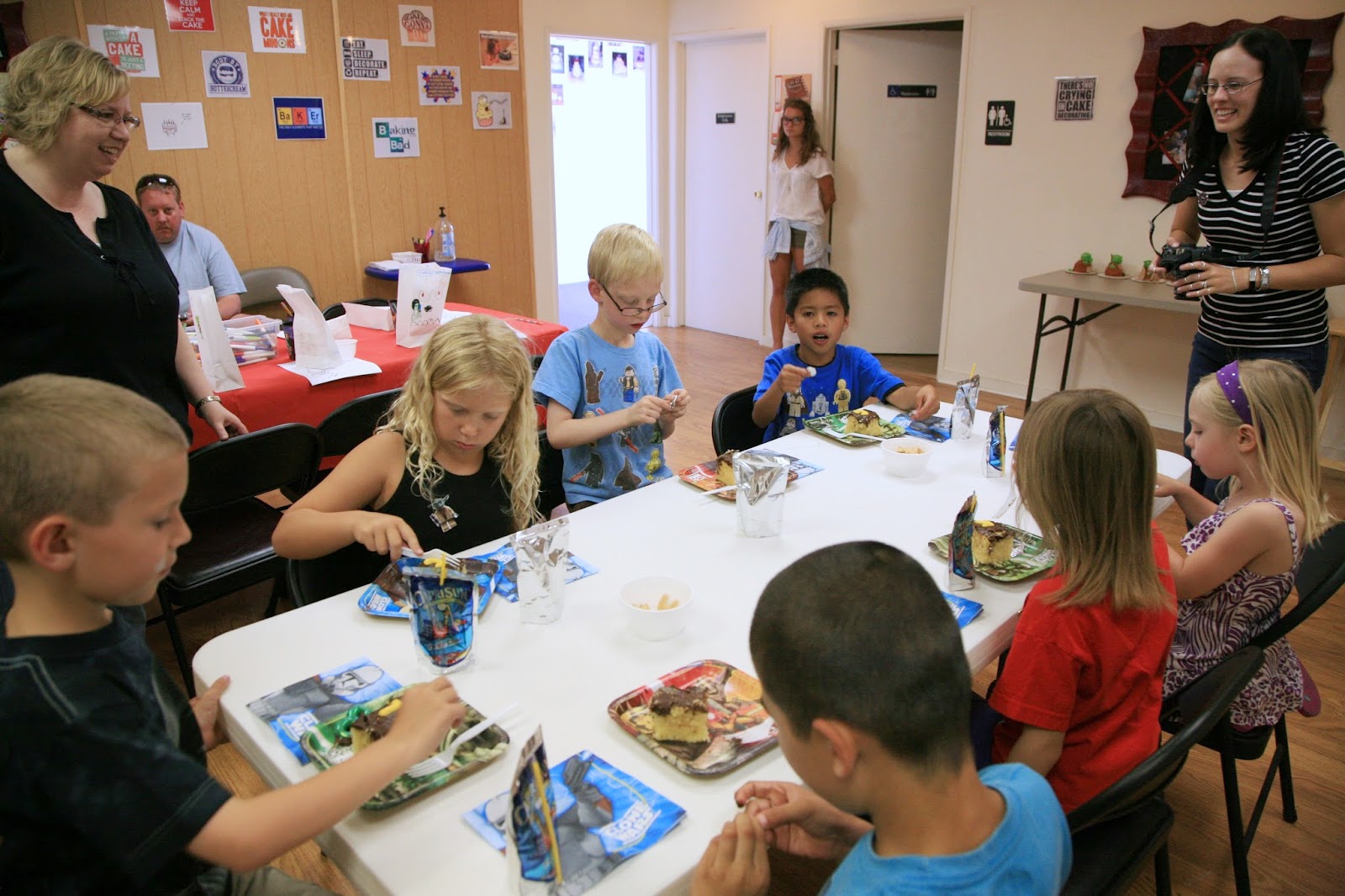 Finally, it was time for presents. 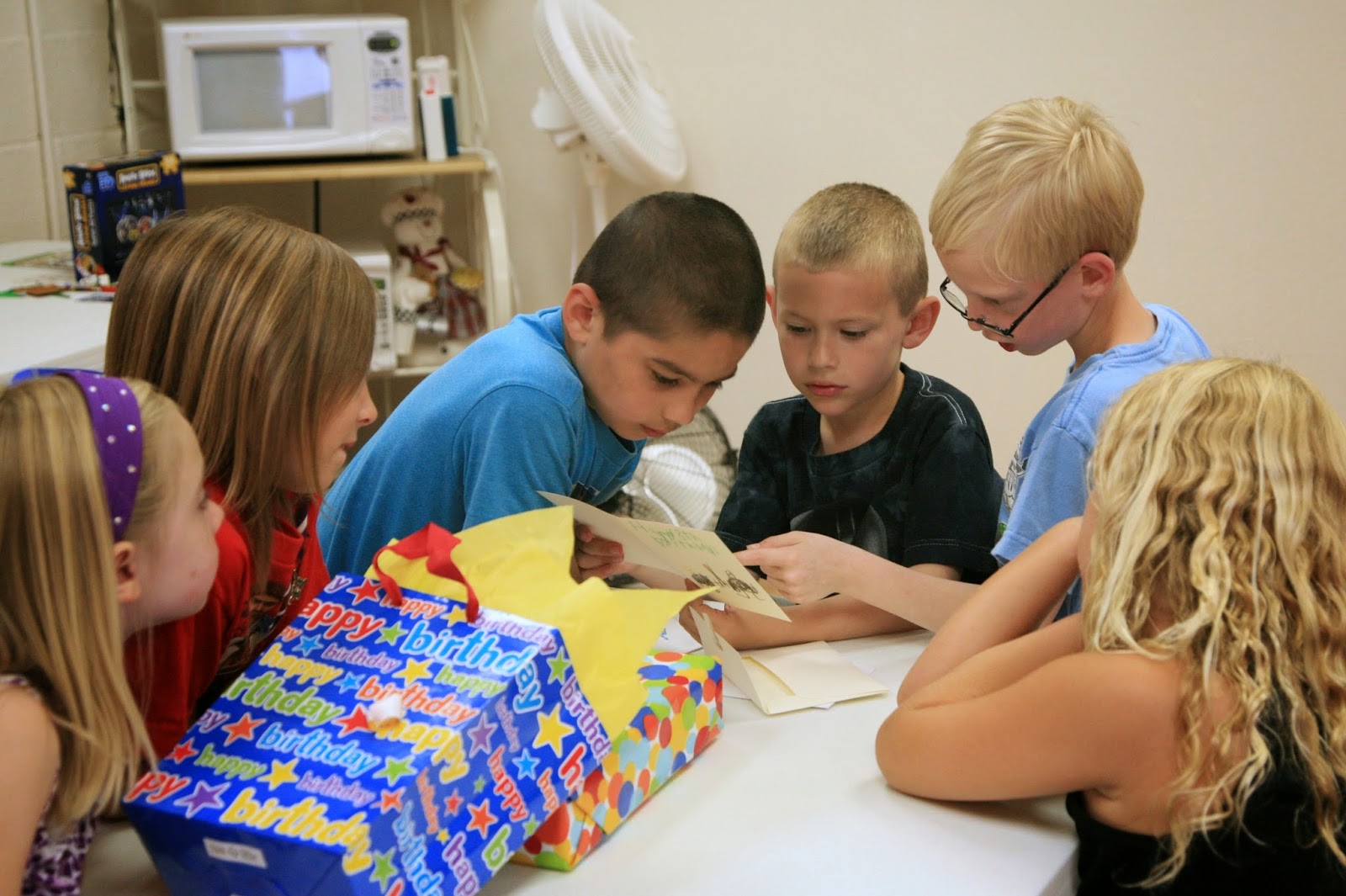 And last, a group picture. 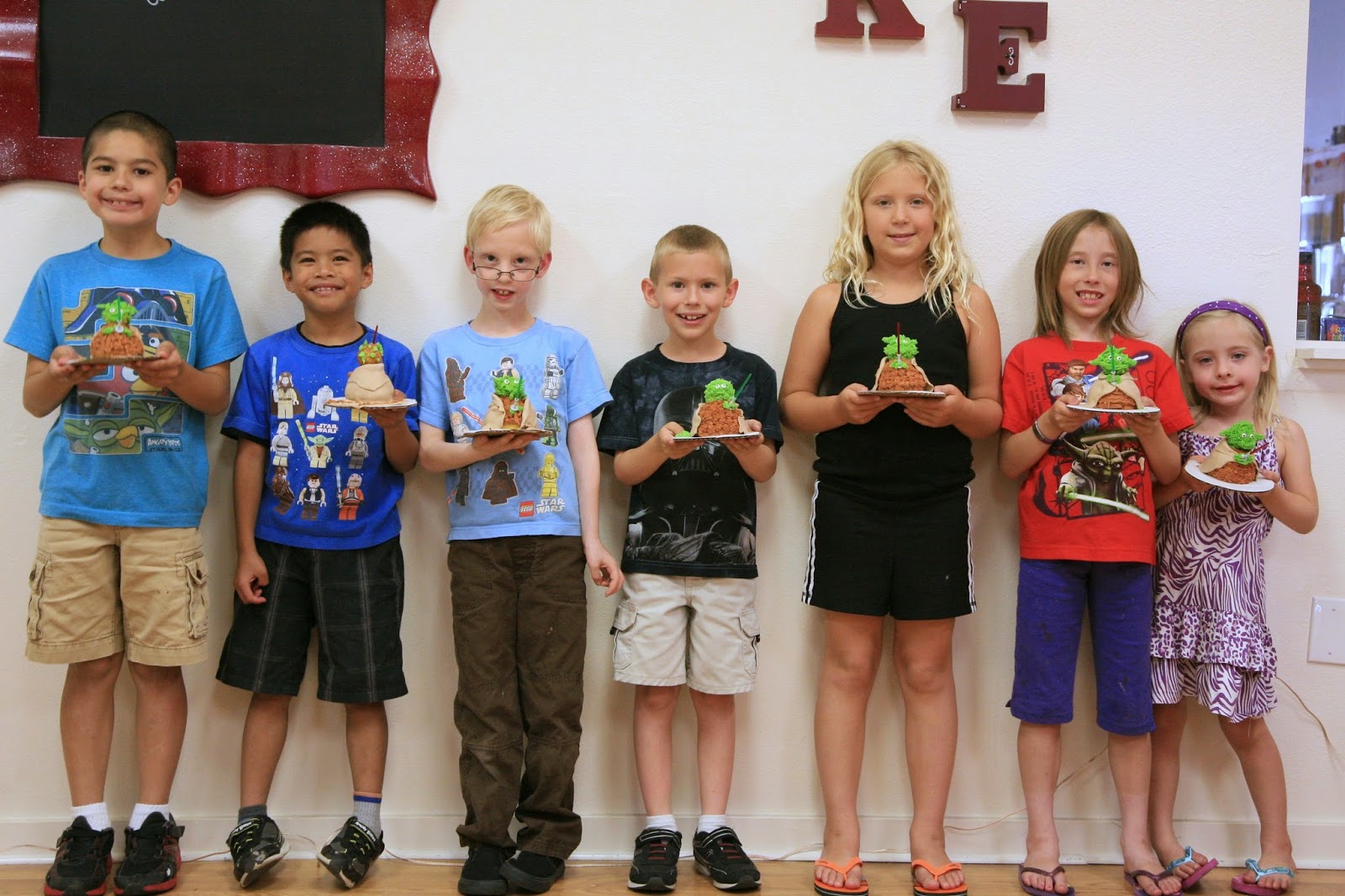 Thanks to all who helped celebrate and make it a wonderful day.  Happy 8th birthday, Trevor!
Email ThisBlogThis!Share to TwitterShare to FacebookShare to Pinterest
Labels: Cake, Parties