Usually, I dedicate one layout to Trevor's Halloween costume and a second layout of him trick-or-treating with his friends. This time I combined the two. I didn't really have anything to say about Trevor's costume: I'm not into Star Wars, I did absolutely nothing creative for his costume (except using my Crop-a-Dile to punch a hole in the belt to make it small enough for him to wear), and I didn't get tons of great photos of him in his costume. Steve and I dressed as Civil War soldiers because it was easy and fun. It was the first time we dressed up in something that didn't coordinate with Trevor's costume. I mentioned that in my journaling, but it didn't need an entire page on its own. I also mentioned in the journaling that our trick-or-treat group was smaller, since Trevor's best friend moved away. 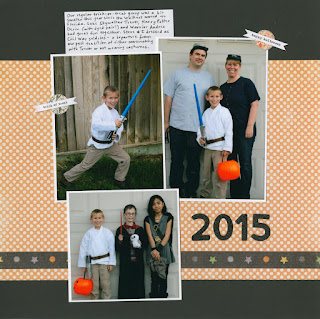